In the film, “when a deranged transvestite serial killer, Mother Mortis (played by Jay Addamz), and his satanic cult led by his true mother ancient witch, Julia Von Eric (played by Kathy Griffiths) embark on a rampage of torture, death and bizarre sexual rituals in a bid to summon the interdimensional shit demon Yig-Naggoth to devour this universe – Only a rag-tag group of survivors can save us from eternal defecation!”

The indie film is led by none other than Nomi Lucien (played by Holly Laura Platt), the sister of Mother Mortis. Together can our unlikely band of misfits put a stop to Mother Mortis and her murderous reign of death, depravity, and terror!

Mother Mortis is streaming now on TromaNow and will be available on several formats this May including  Blu-Ray, DVD, and VHS by Dark Hollow Home Media for Apotheosis Productions for UK/EU/Asia. 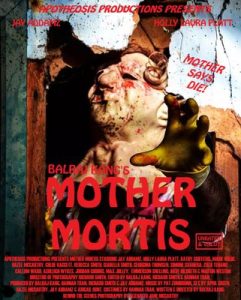 ← Prev: Brazil's Fantaspoa Reveals the Second Wave of Its Eighteenth Amazing Edition Next: Set Sail With 'Titanic 666' Premiering On The Anniversary Of The Titanic's Sinking →