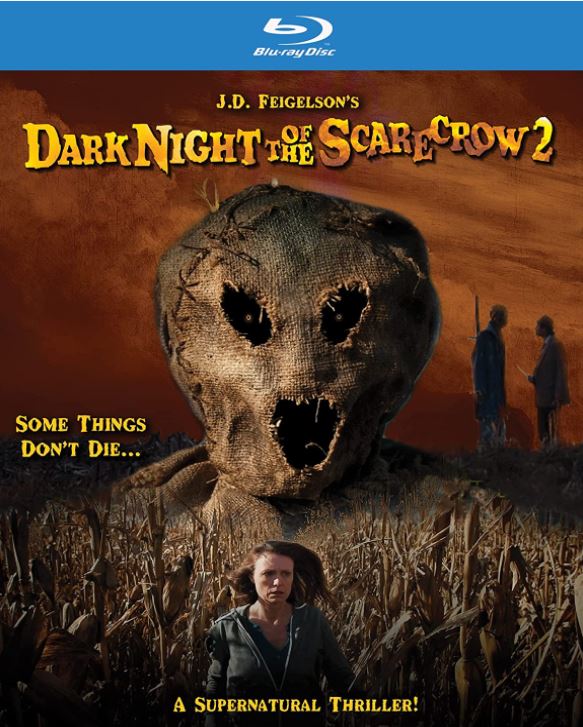 Single mom Chris Rhymer (Amber Wedding) and her son Jeremy (Aiden Shurr) arrive smack-dab in the middle of cornfield country to begin life anew. Speaking of life, someone or something is wandering about these rural environs killing folks willy-nilly.

Therein lies the crux of this fright film. Who is committing these murders, and why? Well, in case you are a really shit-lousy guesser, it seems a scarecrow is doing the deed, but why and how?

That is where the movie gets a bit over-complicated for it’s own good. Are whispered confessions the straw demon’s motivating factor? Is it the games played between Chris’ emotionally troubled child Jeremy (Aiden Shurr) and his secret-keepin’ caretaker Mrs. Corvis (Carol Dines)? How will Chris’ mysterious past figure in?

As stated, the original film’s screenwriter J.D. Feigelson returns here, but this time takes the directing reins as well and he (along with cinematographer/co-editor Josh McNally) delivers a nicely filmed production that fills the frames with some solid images that make the absolute most of the Kentucky farmlands and sprawling plains the killer calls home.

As for special features, this Blu-ray release from VCI/MVD Entertainment contains only the film’s trailer (as well as one for the original recipe and a handful of other fright flicks).

All in all, Dark Night of the Scarecrow 2 is a solid enough lil’ supernatural thriller, strong on story and light on gore… and while not having a lot to do with the original, still manages to be a good time nevertheless!