Blu-ray Review: House On the Edge of the Park 3-Disc Limited Edition (1980) 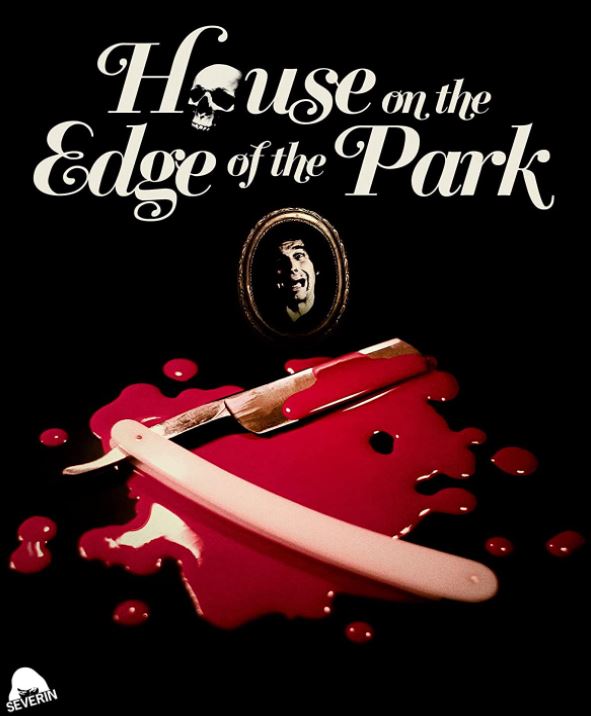 Alex (David Hess, who coincidentally also starred in Wes Craven’s 1972 masterpiece The Last House on the Left… a title I’m sure I won’t be mentioning again in this review) is a true renaissance man with many passions; disco dancing, acting smarmy, and being a sexually violent serial killer.

One night, Alex and his pal Ricky (Italian horror regular Giovanni Lombardo Radice in an amazing t-shirt) are invited to a swank house in New Jersey for a disco party full of discoing. Once there, the rich pricks that are throwing the shindig immediately begin taking advantage of the rather dim Ricky, and our “hero” turns on the apish charm, only to get blue balled.

These things goes over like a fart in a submarine for Alex and before long he’s pulled out his straight razor and the night immediately devolves into card-playing, swimming, face slashing (there it is), sexual assault (and again… ), and of course, tchotchke smashing (“Oh, the humanity!)!

Listen, anyone that reads the title House On the Edge of the Park and doesn’t think “My word, that sounds an awful lot like The Last House on the Left.” probably should check if they are remembering to breath… and that “rich folks sexually terrorized by low-class David Hess” plotline certainly doesn’t make things any better originality-wise… but my lord does sleaze maestro Ruggero Deodato (Cannibal Holocaust) dive balls-first into the sludgy end of the pool with wild abandon!

Absolutely every frame of this flick is filled to bursting with tacky sex and violence, unlikable (notice that I didn’t say un-entertaining) characters, smart-assery, raunchy disco tunes, and an amazing three way, no-holds barred battle to see whose hair has the greatest volume; Hess, co-star Gabriele Di Giulio, or those (very) early ’80s crotches on display that go beyond featuring landing strips to showcasing the follicle-based version of the entire fucking airport.

Speaking of Hess, as you may have guessed, he’s just Krug from The Last House on the Left (there it is again), with every bit of scenery devouring insanity on full display. It’s a good thing too as the rest of the cast (minus the manic Radice who is a good match for Hess in the over-acting department… not a negative, believe me) is simply detached, but then again wouldn’t people of their upper crust be anything but?

Also of note is the disco-drenched, at times inappropriately sweet score courtesy of composer Riz Ortolani that provides the necessary sonic lunacy to accompany the outrageous action on screen (and also comprises the entirety of disc three of this Blu-ray release from Severin).

As for the image quality of the transfer, a 4k scan taken from the film’s original negative, is pretty damn great with a clear image with minimal damage throughout and vivid colors that bring the crimson stained terror tale to life.

Which brings us to bonus features, of which this release has a mod-mansion’s worth! Kicking things off is an audio commentary courtesy of Cinema Arcana‘s Bruce Holecheck  and Ultra Violent‘s Art Ettinger which presents plenty of details on the film’s production, and the careers of those involved in a lively fashion, followed by interviews with Deodato, cinematographer Sergio D’ Offizi, Radice (and his dog in a fascinating, brutally honest, and at times hilarious conversation… easily the best of the included interviews), Hess (in an archival chat where he makes some truly unbelievable claims that’ll have you rollin’), and set designer Antonello Geleng.

Also included are an image gallery and the film’s trailer (where the picture is called House of the Park on the Edge, and yes, that does get explained via the special features… it’s still delightfully ridiculous though).

This brings us to disc two which contains the feature length documentary Deodato Holocaust, which takes a detailed and incredibly engaging trip through the director’s long career of delivering sickening shocks! The feature also comes with a brief selection of special features including a collection of deleted scenes (which include some real zingers courtesy of Deodato), and the film’s trailer.

And as previously mentioned, disc three contains the film’s soundtrack on CD.

To summarize: Sleazy, outrageous, and often over-the-top; House On the Edge of the Park is as watchable as it is scuzzy and that is a wickedly wonderful thing indeed boils n’ ghouls!