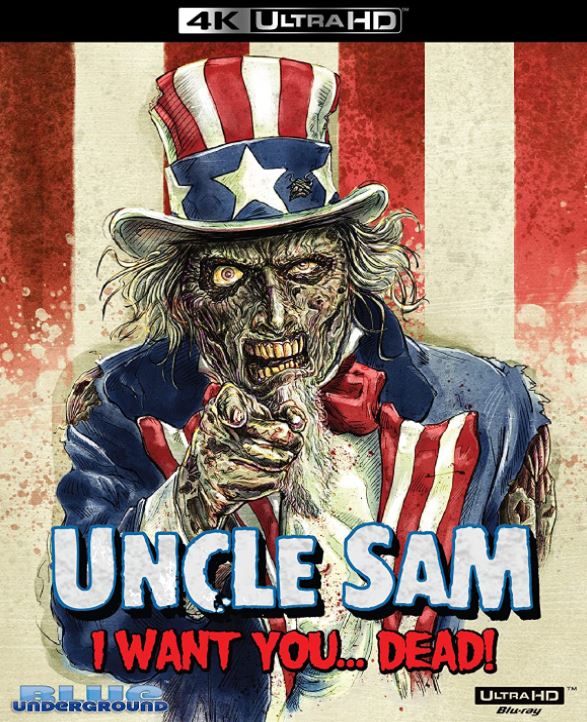 Master Sergeant Sam Harper (David Fralick) is burnt to a fuckin’ crisp by “friendly fire” in Kuwait, after which his remains are shipped back to his hometown of Twin Rivers. Receiving said remains is his sister Sally (Leslie Neale), a woman who admittedly runs cold on her sib (as do most seeing as how he was a bit of an asshole)… though her son Jody (Christopher Ogden) worships his deceased uncle Sam and hopes to follow his footsteps and become a soldier his own damn self.

This of course would indicate that Jody actually has a future, which is becoming ever more unlikely as a group of teens have inadvertently resurrected Sam by burning a flag on his grave on the Fourth of July which begins his zombie kill spree… eventually dressed as the historical Uncle Sam!

How will our pint-sized hero save the day and come to terms with the fact that his beloved uncle is a rather sizeable prick?

Let’s start with the downside to Uncle Sam first… this film takes a long-ass time to get to the good stuff.

For nearly forty minutes (and keep in mind this film runs just shy of 90 minutes with credits) we follow our sad sack junior protagonist as he learns that both active combat and his uncle were nothing like he thought they were, and this straight-up drama continues, and continues…

Admittedly plenty of classic 42nd St. material, of which this is definitely kith and kin, if not the real McCoy timeline-wise… and how could it not be coming from director William Lustig (Maniac) and writer Larry Cohen (It’s Alive, The Stuff)… often dealt with heavy social issues, but usually there were plenty of boobs and bad guys to make the social commentary go down a bit smoother. This is great character building, and the cast does a rock-solid job with it, but we paid for a killer Uncle Sam.

Now eventually the sinister shenanigans begin, and this is where this fright flick shines!

The zombie make-up on the eponymous character is cool-as-fuck, and in his pre-costume format he resembles the titular creature in Lustig’s previous Maniac Cop series… plus the set-pieces that comprise hiss murderous mayhem are as outrageous as you’d hope and feature the likes of a prolonged stilt-walking sequence, a sack race, a fireworks display (the last of which features an appearance from legendary actor Robert Forster (Alligator, Jackie Brown, as well as Lustig’s Maniac Cop 3: Badge of Silence no less!) and many more!

Now, all of those sinister star-spangled shenanigans demand to be seen in crystal clarity, and this presentation from Lustig’s own Blue Underground is more than up to the task!

This 25th anniversary, 4K 16-bit restoration from the original camera negative is a solid visual upgrade from what we’ve seen in the past (specially considering that many of us first saw this flick on VHS) with high levels of detail, deep blacks, and solid, eye-popping color (which is a good thing, as unlike a lot of horror movies, much of the action in Uncle Sam takes place during the day).

Adding to the entire affair are a patriotic parade (yes I realize the message of the film, but c’mon… work with me here) of eerie extras!

Kicking things off we get two archival audio commentaries; one with Lustig, Cohen, and producer George B. Braunstein (from a previous Blue Underground DVD release), and the other with Lustig and actor Isaac Hayes (from a previous LaserDisc release). The former is the more solid of the two, due in great part to the comradery between Lustig and Cohen.

Following that comes comes a featurette on the film’s big fire gag, a brief deleted scene, a gag reel (really just a bit of editing fun), the film’s trailer, and a poster and stills gallery.

← Prev: A "Stranger Things" Spin-Off Is In The Works Next: This July, Karen Gillan And Aaron Paul Star In The Sci-Fi Thriller 'Dual' (Trailer) →