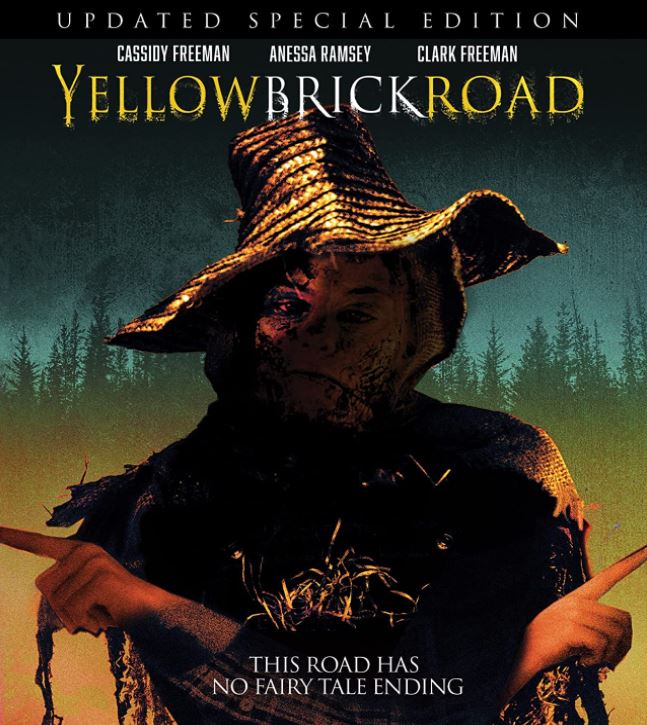 One fine morning back in 1940, the citizens of Friar, New Hampshire walked into the wilderness, en masse, and got their asses slaughtered (minus one “lucky” fellow) by who the piss knows what on a trail named Yellow-brick Road.

Flash forward to the amazing future year of 2008 and enter Teddy Barnes (Michael Laurino) who just so happens to be the leader of a group of adventurous sorts who trek off to that rural town in search of answers to the distant tragedy. They bring a rad-ass lil’ land rover/dune buggy thing with them too if you are keeping score at home… which you lot never are…

Once there they encounter un-cooperative townies (minus one loquacious lass who actually provides some info) before trekking off on the same path as the citizens of yore. Speaking of those folks, as the (seemingly endless) “road” goes on and ever fuckin’ on, they find themselves more removed from civilization (no matter how un-civil it may be) and begin to encounter more and more dread happenings, including music from decades past issuing constantly from the green hell around them that begins to set ye olde nerves on edge to say the least, and an evil hat (more effective than you may think).

As you may surmise, things go shockingly, horribly south from there and our heroes soon find themselves at the mercy of whatever it is that haunts that trail!

Part straight ahead fright flick, part “found footage” mockumentary, YellowBrickRoad is some quality horror biz through and through, and yours cruelly lapped this sinister shit up with wild abandon!

Writer/directors Jesse Holland and Andy Mitton deliver a ton of atmosphere and palpable dread with simple techniques that yield amazingly effective results. The end result of all that verbiage back there is that those wonderful cats immerse the audience into the characters plight hardcore, and it’s easy to feel balls-deep (professional reviewer term) in the action as our protagonists begin to go absolutely, stark ravin’, ape shit.

This is also aided and abetted by the newsreel-like footage that begins the film, and purports to contain images of the carnage as well as audio testimony of the same. It’s really effective and draws one into the world’s mythology right out of the gangrenous gate!

A lot of the scares and unease come from the heavy lifting of the film’s sound department headed by sound designer Daniel Brennan (along with Mitton), a talented mother fucker through and through, who creates here a sonic hell-scape that is simply dizzying in the best possible way!

I was also pleasantly surprised to see some impressive, and gloriously practically realized, gore on display here and there, and I haven’t mentioned them much, but the cast is really on point here as well, and sell the scares (and characters) to the most!

While the good vibes are a-flowin’ let me also state that your viewing enjoyment of YellowBrickRoad can be greatly enhanced if you continue to park your arcane asses in front of the beastly boob tube after the feature has run from frame one to frame done, as there are some special features on this Blu-ray release from Lightyear!

Included here are: an informative, and super chill, archival audio commentary from Holland and Mitton that take us through just what it took to bring YellowBrickRoad to life, followed by new featurettes on the film’s effects, a collection of interviews featuring Mitton, Holland, co-stars/producers Cassidy and Clark Freeman, and producer Eric Hungerford, and the film’s Blu-ray release trailer.

Bottom line, YellowBrickRoad is the type of fright flick that throws you right in to the wicked world it creates and doesn’t let go for nearly 100 tension filled minutes! If you haven’t seen this one you really should fix that post-fucking-haste!