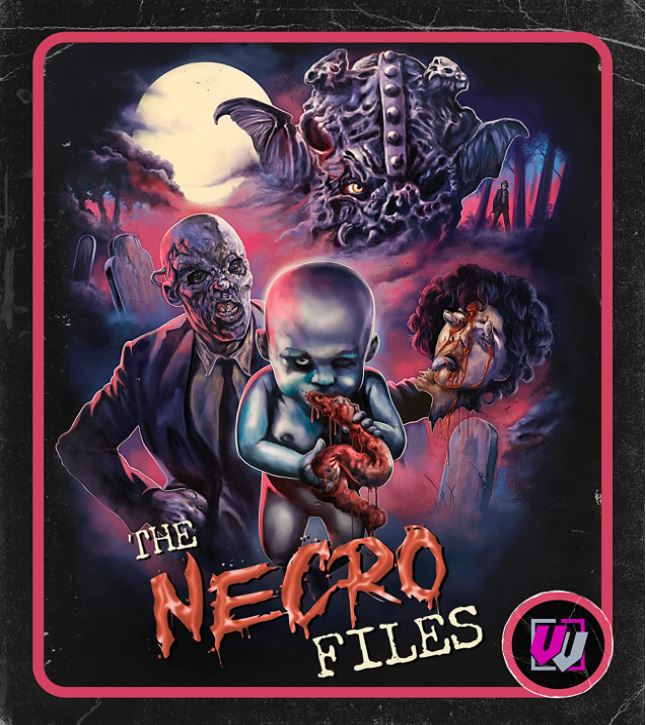 Beginning with that ol’ razzle-dazzle of full-frontal nudity, Matt Jaissle’s The Necro Files (hahaha, clever!) begins moistly with a woman being harassed during shower time by a masked assailant (Issac Cooper)… and his mask bears a swastika, just to let us know he’s evil… which is good because the murder/sexual assault and graphic dismemberment left me wondering. It’s double penetration like you seldom see these days, and it’s a mess, so showering was a moot point…

Anyway, after being killed while already apprehended by the police, some masked Satanists resurrect that sex-crazed psycho from the grave by murdering a baby (doll) that is the result of one of his past sex crimes… a move they soon regret as the resulting dick removing rampage really puts a crimp in some of that kooky cult’s style!

Having escaped the zombie rampage, two of the cult members are scared straight and decide to use a counter spell to put that zesty zombie, now sporting a massive hard-on mind you, six feet under… for a second time…  but that goes completely sideways resulting in that sacrifice being brought back as a zombie… that can fly. A flying baby zombie (who screams out “Weeeeeeeeee” as it tools around town). This shit just keeps getting better and better!

Soon it’s up to a cop and his psycho, drug snorting partner… along with the baby to try and stop the preternatural murder spree threatening to bring Seattle to it’s knees… in defeat, you perverts!

The Necro Files is a gloriously absurd, S.O.V., splatter-thon, and it seriously gives zero fucks if you are offended by the wicked wonders it contains… in fact, it sincerely hopes you are offended just so it can up the ante in the very next scene… and boy does it ever do just that at every possible turn!

Jaissle (working from a script by Todd Tjersland and Sammy Shapiro) fills nearly every scene with gobs of killer practical effects gore, brutal violence, T&A, over-the-top dialog, and cartoon sensibilities that could only be created when you just pick up a camera and go apeshit, and as we all know ’round these parts, that is the bread and butter of our beloved shot on video genre; the true punk rock of the horror biz! Add in a tongue-in-cheek sensibility and you got an irresistible concoction no boil or ghoul into D.I.Y. horror should be able to resist!

As crazy as all of the action in his film is, Jaissle is calm and cool on the accompanying commentary track, one of two on this Blu-ray release from new Wild Eye Releasing imprint Visual Vengeance!

As mentioned, Jaissle’s commentary is major chill (and full of self effacing honesty and dry humor), and is a fascinating listen that details what it took to bring this madness to un-life, including it’s ties to punk rock, it’s partial comic book origins, and sex-toy special effects… and stay for the end credits, you’ll be glad you did!

The other audio commentary is provided by Matt Desiderio of Horror Boobs and Billy Burgess of the Druid Underground Film Festival which is a more upbeat, often uproarious look at the film from the fan’s perspective.

Following that we get an interview with Jaissle, a duo of very early short films by the same (the best of which features a hard drinking monster getting hassled by horror icons about town before going on a kill spree and becoming the singer of a puppet heavy metal band… seriously, let’s pause and admit that is some A1 Grade-A awesomeness right there my cats n’ creeps), and some sort of reaction show featuring The Necro Files from Chilean TV of all places.

Next up we get a “making of” retrospective featurette hosted by Jaissle that serves as sort of an abbreviated version of the anecdotes contained in the previously mentioned commentary, a duo of trailers (one a Producer’s trailer and the other for the Visual Vengeance release), and yet another early short film from Jassile.

Also featured is Jassle’s 2017 follow-up film Necro Files 3000, which is a puppet film set within the same universe as the first film… just with more fucking puppets obviously. Trust me, it fits right in. Necro Files 3000‘s trailer is present here as well.

As if all of that isn’t enough, this release also tosses in a few goodies as well including: a retro VHS sticker set that will instantly transport those of you of an age right back to the good ol’ days of Mom n’ Pop video joints stocked to the ghoulish gills with all manner of gnarly horror biz that they were all to eager to rent to kids that had no business seeing such glorious trash (but we are sure fuckin’ happy we did!), The Necro Files official condom (you read that right), a reversible sleeve featuring original VHS art, and a collectible mini poster (and a small paper insert, both with differing, and rad as all fuck artwork)… here take a look at this top shelf material for your own damn selves: 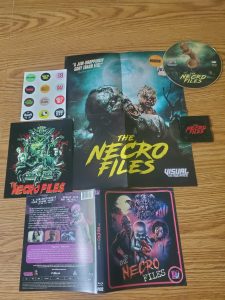 To sum it up; if you desire S.O.V. splatter-thons, then The Necro Files will scratch that itch like no fucking other, it’s gross, insane, and delightfully batshit, and the package put together by Visual Vengeance is a true knock-out!

← Prev: Trailer For Netflix Series "Echoes," Reveals A Twisted Tale Of Sisters And Secrets Next: Based On The Cult Hit, "Heathers: The Musical" Is Coming To Roku! →

A delicious blend of both dark comedy and thriller, Apple TV+'s new series “Bad Sisters” is headed your way next week....

When it comes to vampire movies you don't get much more iconic than Joel Schumacher's 1987 classic The Lost Boys! Sink...