Ty Gordon makes his feature directorial debut with the new thriller Never Forgotten, whose trailer and poster have arrived.

In the film, “three friends struggle to cope with reality as the darkness from their past threatens to destroy their friendship, and along with it, their sanity.”
Besides both writing and directing the film, Gordon also stars alongside Robert Thomas Preston and Andrew John. Rodes Phire, Robert Thomas Preston, and Stephen Gibler produce.

Never Forgotten will be available On Demand on September 30th, 2022. 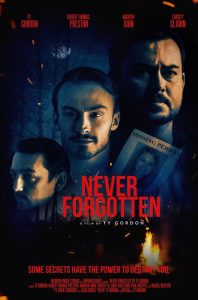