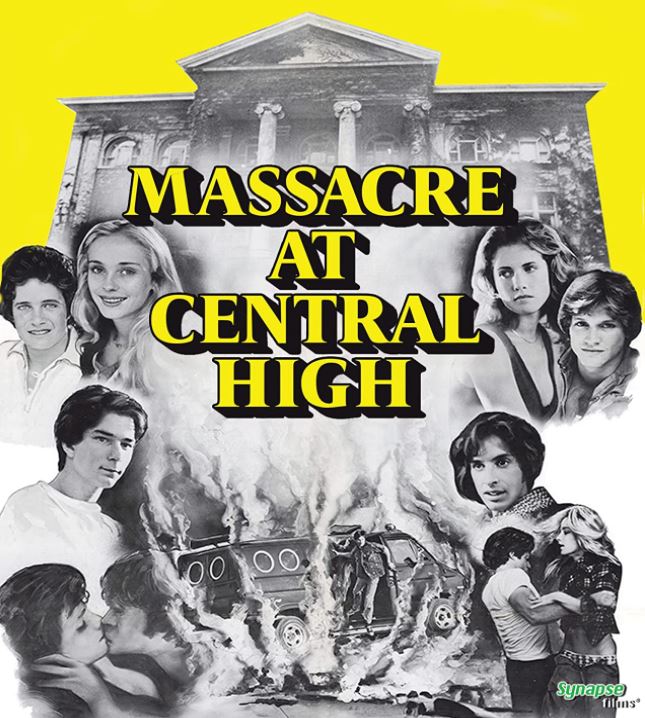 After learning the film was distributed by someone named “Brian”… and only “Brian”… and his distribution company, we get down to brass tacks with Massacre at Central High…

Mark (Andrew Stevens), along with his bully buddies Bruce (Ray Underwood), Craig (Steve Bond), and Paul (Damon Douglas) rule Central High through a reign of douche-baggery seldom seen on the silver screen! Take for instance their harassment of nerdy Spoony (Robert Carradine, Revenge of the Nerds coincidentally… ) who is busy painting swastikas on school lockers which they force him to clean off… okay, that one is a bit dodgy… would it help if I told you he was painting them in protest of their raucous regime?

Enter: David (Derrel Maury), a new man on campus who just so happens to be an old buddy of Mark’s… an old buddy that helped him out of a “jam” at their old alma mater. Now David is one aloof mother fucker, so when he’s brought into the gang by proxy it’s tough to read his exact thoughts on the asshole Olympics he witnesses (which include such hoary ol’ chestnuts as “being a dick to a deaf person” and “harass an overweight dude”… oh and of course, “attempted rape”), but you can guess it’s bordering on homicidal rage, and before long David is beating the asses of those thugs with relative ease!

This of course goes over like a fart in a submarine with Bruce & Co. and revenge is swift and David ends up permanently disabled… which makes him even more calm-angry which of course leads to all manner of revenge and absolutely bonkers violence and mayhem!

As you may surmise, ol’ Massacre at Central High is going to be some dicey territory for some given modern headlines, but this is one hell of a glorious grindhouse smorgasbord that is well worth lappin’ up, ya dig?
First up in the positive column is the fantastic cast on display here, with headliner Maury coming off as the coolest, most Zen dude in the room… until he well and truly ain’t, and then you better watch your ass something fierce because things are about to become so massively over-the-top violent that your jaw will be doubtless colliding with the floor on more than one occasion! Also the fucker can absolutely fly down a set of stairs on one foot… it’s pretty breathtaking to witness!

A lot has to be said for the gents bringing the other side of the coin to life as they are one-and-all so immensely unlikable that you will actively cheer at every misfortune that befalls them, and boy howdy befalls them it well and truly does!

The female contingent is strong as well with the ethereal presence that was Rainbeaux Smith (Lemora: A Child’s Tale of the Supernatural) and a layered performance from Friday the 13th: The Final Chapter‘s Kimberly Beck leading the way.

While this is at it’s heart a thriller with socio-political overtones, you can bet your arcane asses that it also possesses a horror streak a mile long; so expect elaborate kill sequences… along with bloodshed, explosions… maybe some full-frontal… all of the grindhouse staples us cats n’ creeps absolutely survive upon… not to mention possibly the schmaltziest theme song ever recorded (added against writer/director Renee Daalder wishes). This is the good stuff my fiends!

And let me just say you can see this picture in the crispest of detail thanks to a gorgeous 1080p remaster scanned, transferred, and supervised by Daalder himself before his death in 2019 that contains warm flesh tones, brilliant color, and plenty of detail that makes this flick appear as if it was shot yesterday, not 35 plus years ago. The only footage that suffers noticeable grain appears in the pictures hang gliding sequences with some material seemingly shot on different stock.

But image clarity is not all that this Blu-ray release from Synapse Films has to offer, as bonus features on this disc are pretty damn solid!

Kicking things off we have two “kinda/sorta” audio commentaries; one in the form of a series of interviews conducted by The Projection Booth podcast’s Mike White featuring stars Stevens and Carradine (who have spotty recollections of the filming) as well as Maury and co-star Rex Steven Sikes (who are much more on point concerning the material at hand), and the other an interview with Daalder conducted by horror historian Michael Gingold that takes us through the film’s creation in-depth.

Also included are an excellent “making of” documentary created for this release that takes us through the film’s production with plenty of entertaining anecdotes that come courtesy of interviews with cast and crew, a theatrical trailer, TV spot, a radio spot, and a still gallery.

If you dig on Heathers or The Guest, this flick will well and truly be in your wicked wheelhouse… but believe me when I say Massacre at Central High offers so much more; from it’s quality cast, to it’s amazingly gorgeous cinematography (courtesy of Bertram van Munster), to it’s explosive (and off-the-wall) violence… this is sublime grindhouse perfection!

← Prev: The Past Comes Back To Haunt Three Friends In The 'Never Forgotten' Trailer Next: An Affair Breeds Dark Obsession In 'The Dead Thing' →