“The Ghost Brothers” Are Back For A Haunting New Season (Trailer) 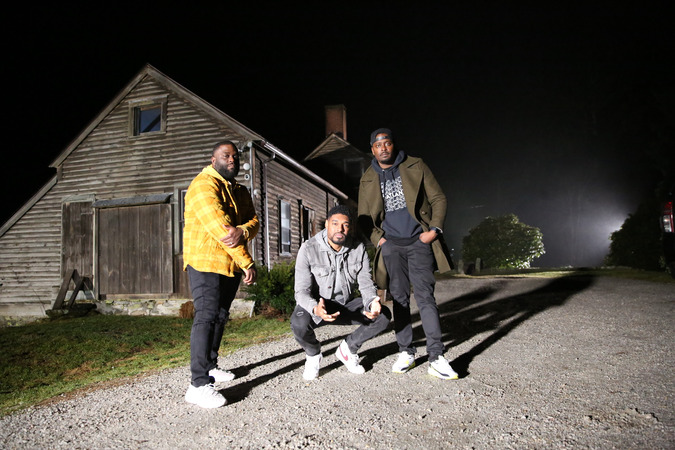 The Ghost Brothers are back on the haunt with the much anticipated second season of “Ghost Brothers: Lights Out” on discovery+, premiering as part of Ghostober.

Joining the Ghostober programming line-up, Dalen Spratt, Juwan Mass and Marcus Harvey flip the switch on paranormal lore by shining their own light on its darkest secrets. These candid and unorthodox paranormal investigators explore iconic haunted hotspots to find out if the legends are really true and if these places are still plagued by the horror of the events that occurred there. They are ready to expose the haunted holdouts hanging around these locations with unconventional experiments. The eight one-hour episodes of GHOST BROTHERS: LIGHTS OUT premiere on discovery+ with a terrifying three-episode binge on Friday, October 7, and then a weekly episodic rollout on Fridays.

In the new season, the paranormal investigators visit some of the most iconic haunted locations including the Ohio State Reformatory in Mansfield, Ohio, where they confront entities from the past; the legendary Bobby Mackey’s Music World Nightclub; and the Perron family farmhouse, the location that inspired the feature film, “The Conjuring.” “The Ghost Brothers” are seeking the truth in the spiritual realm and won’t rest until they uncover what haunts these locations.

“This is honestly the first time that I think we’ve taken things a bit too far … and that says a lot coming from me,” said Spratt.

“This is about to be the greatest season of Lights Out! This time me and Juwan got payback on Dalen. These are the nation’s freakiest locations! Get ready for the craziness,” stated Harvey.

“This might be our most active and frightening season. Things get dark! I almost wish we could just keep the Lights ON! LOL,” added Mass.

Dalen Spratt, Juwan Mass and Marcus Harvey investigate a century-old haunting at the notorious Ohio State Reformatory. But as they confront the entities still lingering in the massive, abandoned facility, they become targets of terrifying paranormal activity of more recent origins.

Dalen Spratt, Juwan Mass, and Marcus Harvey investigate shocking reports of ghostly goings-on at the legendary Bobby Mackey’s Music World. What starts out as a friendly mission at the haunted honky-tonk quickly escalates into a dangerous situation when the spirits set their sights on Harvey.

Dalen Spratt, Juwan Mass, and Marcus Harvey investigate the infamous farmhouse that inspired the horror blockbuster “The Conjuring.” The guys will stop at nothing to get answers about this legendary haunting, including sacrificing one of their own to a powerful succubus.

The scares ramp up when Dalen Spratt, Juwan Mass, and Marcus Harvey visit the Moon River Brewing Company, one of the most haunted buildings in America. Their investigation takes a twisted turn when they discover a dangerous portal to the other side in the basement of the brewery.

Dalen Spratt, Juwan Mass, and Marcus Harvey take on one of the world’s largest and most iconic paranormal locations: the Trans-Allegheny Lunatic Asylum. The guys are more vulnerable than ever before when they split up to locate a mysterious black mass known as “the Creeper.”

Dalen Spratt, Juwan Mass, and Marcus Harvey cross the velvet rope to the other side at the historically haunted Tampa Theatre. As the eerie experiences pile up in this menacing movie house, the guys step into the spotlight to confront the source of the disturbing activity.

Dalen Spratt, Juwan Mass, and Marcus Harvey investigate the death-ridden Menard House in Galveston, Texas. Yellow fever and a devastating hurricane wrought havoc on the home, but the guys suspect a dark family secret is responsible for ghostly activity in the stately manor.

Dalen Spratt, Juwan Mass, and Marcus Harvey check into the infamous Waverly Hills Sanatorium to confront yet another dark chapter in the building’s horrific history. The guys put themselves in a precarious situation when they use real body bags to provoke the spirits.

← Prev: Sink Your Teeth Into Our Interview With "Vampire Academy" Star Jonetta Kasier Next: 'All Jacked Up and Full of Worms': The Wildest Film Of The Year Gets New Trailer →