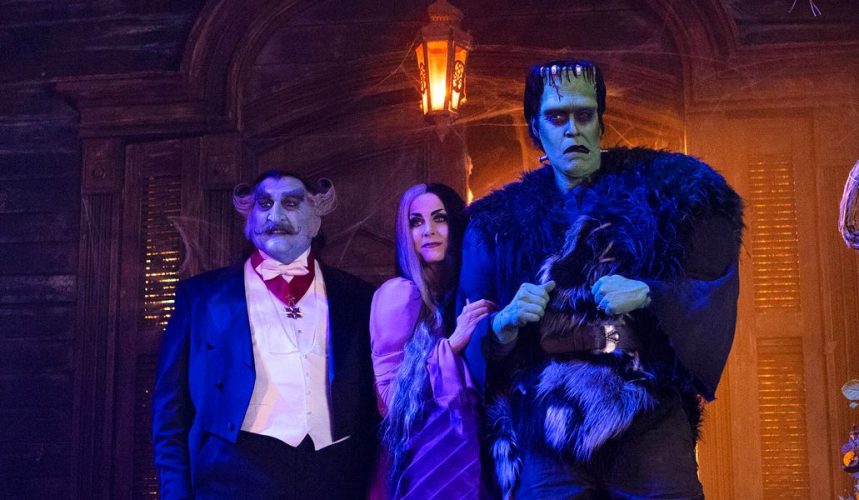 Rob Zombie‘s highly anticipated movie, The Munsters, is finally on its way! Not only is it coming to Blu-ray and DVD it’s also set to land on Netflix this Halloween season. To celebrate its Netflix premiere, we’ve got two new clips featuring our favorite monster family.

“Herman and Lily’s crazy courtship takes The Munsters on a hauntingly hilarious trip from Transylvania to Hollywood in the all-new feature-length film.”

Sheri Moon Zombie stars as Lily Munster and Jeff Daniel Phillips as Herman Munster. Daniel Roebuck co-stars as Grandpa Munster. Rob Zombie movie regular Richard Brake (31, 3 from Hell) will play Dr. Henry Augustus Wolfgang. Catherine Schell (“Space: 1999,” The Return of the Pink Panther) is set to appear as “Zoya Krupp, the gypsy queen.” Dee Wallace, Cassandra “Elvira” Peterson, and Jorge Garcia co-star in the movie, which is reportedly over two and a half hours long and centers on a family who moves from Transylvania to an American suburb.

The Blu-ray and DVD feature 60 minutes of bonus features including behind-the-scenes footage as well as a feature commentary with Rob Zombie, “taking viewers deeper into this hauntingly sidesplitting adventure and the kooky undead family, just in time for Halloween.”

So when can you watch it? The Munsters will be available on Blu-ray, DVD, and is out on Netflix today.

← Prev: Lost 80s Horror 'Heartland Of Darkness' Recovered And Coming To Blu-Ray Next: 6 Things Movies Can Teach Us About Sports-Related Physical Injuries →