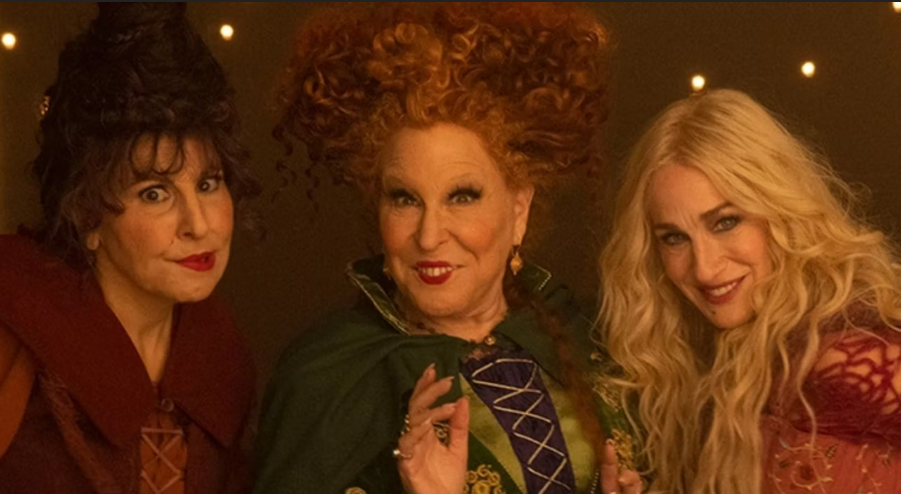 Twenty-nine years after the black flame candle was lit, the Sanderson sisters are back in Hocus Pocus 2, and I have some thoughts.

In the film, a shop owner gives a teen a candle for her 16th birthday, when she lights the candle the Sanderson sisters return. Now, it is up to the three high-school students to stop the wicked witches from wreaking a new kind of havoc on Salem before dawn on All Hallow’s Eve.

The thing is, the movie relies heavily on nostalgia right out of the gate. I’m a realist and went into watching knowing there was no way it would be as special as the original and I was right. It’s missing the same feel and spark the original had, the magic I guess you’d say. But I guess that’s kind of to be expected when sequels of classics are made, especially when it’s been decades since the original was released.

The performances of the majority of the cast come off a bit flat.  We learn little about our main character Becca, leaving her to come off as a little one-dimensional. In fact, all of the performances were lacking, leaving me to assume it is the fault of the script and directing. It breaks my heart, there was so much potential.

It felt as though they were trying to turn the movie into a musical, but were just a few songs shy. There are three songs sung by the Sandersons in the movie, and all but one (the carnival scene) felt weird, and out of place. It felt like filler to me.

There were also some things that were off, sloppy mistakes, and overlooked details. One major example is that in the sequel Kathy Najimy’s (Mary Sanderson) lip issue is on the wrong side and it stands out like a sore thumb. How could that have been missed in production? 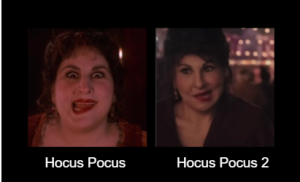 The movie isn’t all bad. The best part of the entire movie was when we get to see the Sanderson sisters’ back story play out. Revealing their origin story was a great idea on writer Jen D’Angelo’s part.

If you loved the first movie, are a fan of cheesy movies, and can accept that the sequel will never live up to the original before hitting play, then by all means watch Hocus Pocus 2. Just don’t be surprised when you feel disappointed. It’s streaming now on Disney+.

← Prev: Movie Review: Mean Girls Meets The Exorcist In 'My Best Friend's Exorcism' Next: New Trailer Takes Us To 'Camp Pleasant Lake' Where A Killer Is On The Loose →