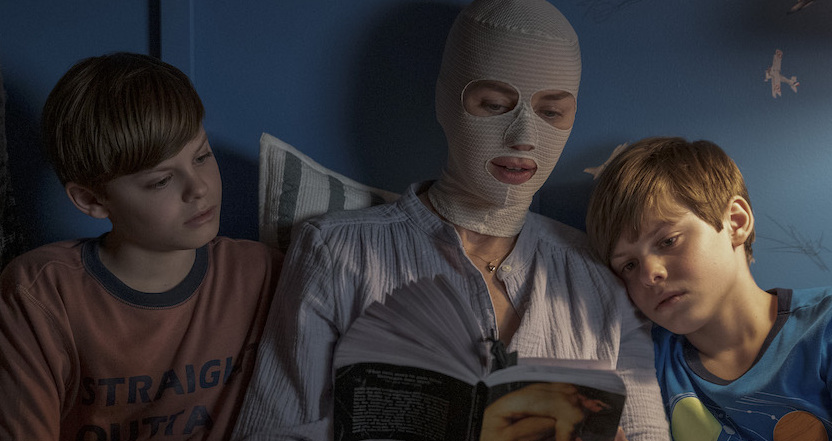 Do you enjoy horror films? The movie Goodnight Mommy is a great choice to add to your viewing list and will linger in your mind for a very long time. Goodnight Mommy 2022, a remake of the same-titled 2014 Australian film by Severin Fiala and Veronica, is currently available on Amazon Prime Video. It is a dark and ominous addition to the horror scene that becomes more difficult to watch as it is comprehended. Continue reading to discover some fascinating details regarding this great innovation in the cinema scene.

The moment twin boys Lucas and Elias enter their mother’s house and see that her face is wrapped in bandages as a consequence of recent cosmetic surgery, they realize that something is off. They gave her a painting, which she surreptitiously tore up, imposed bizarre new home rules, and smoked in her bathroom—all things their devoted mother would never do.

It may seem reasonable that their mother, an accomplished actress, would want to keep her beauty. There are, however, grounds for suspicion that the woman is not who she seems to be. Cosmetic surgery may indeed be the only workable solution to masking the identity of the potential imposter. If you are interested in the advantages cosmetic surgery may have for you and you happen to live in Houston, a reputable Houston plastic surgeon can make all the difference and help you achieve the lovely look you’ve always desired (much more beautiful and attractive than the Mother’s). Additionally, cosmetic surgery is an excellent approach to addressing some concerns that may lead to health problems, so choosing one is a smart move toward leading a healthy life, of course with the advice of your doctor.

Is she the real mother?

Boys duct tape the woman to her bed as she is sleeping. Elias wakes her up and drenches her with ice-cold water before asking where their true mother is. When they query her about the change in the color of her eyes, she replies that she occasionally wears colored lenses and introduces herself as their mother.

The policemen checking on them interrupt their conversation, but soon they leave the lads at home. Following that, Elias and Lukas flee. Before they travel too far, though, Elias realizes he left his toothbrush behind, so he has to return. His mother’s lenses are there when he gets home. He releases the woman from her bond after realizing she is his mom. Another suspicion, though, has yet to be solved. Elias’s life also contains someone who isn’t exactly who they claim to be, even if she isn’t an impostor after all.

What happens inside the barn?

Elias sees a gunshot hole in the blood-stained wall of the barn. He and Lukas used to play with a loaded gun when they were younger. As a consequence, Elias accidentally shot Lukas, which led to a sad disaster. When the mother attempts to get Elias to accept that Lukas is dead, he hits her. She tumbles to the earth below after falling from the barn attic. The hay catches fire as a result of the light she was carrying breaking. Elias flees the barn while it is on fire behind him and his mother is still inside. When Elias looks up, he notices his mother and Lukas approaching him.

Elias’s inability to distinguish between fact and fiction is evident, as his mother mentioned earlier. The shame and anguish Elias had following the death of his sibling led to his hallucination. He created a universe where his brother continued to live as a method to cope with the tragedy that had occurred and the loneliness that he experienced. The film is more of a study of loss and how it may impact us than a horror film.

We hope that you will be intrigued by this post and watch the movie to feel the emotional rollercoaster it entails.

← Prev: This November, A Patient Sets Out To Expose The Truth Behind 'Bridgehurst Asylum' (Trailer) Next: 'A Wounded Fawn' From The Producer Of 'Dune' Is Coming Exclusively To Shudder →