One of my favorite aspects of Christmas is the holiday horror films. I’ve been eagerly awaiting the release of Violent Night, and yesterday, Universal gifted viewers with the surprise release of it On Demand (it’s still in theaters). I slipped on my PJs, popped a bag of popcorn, snuggled up with my dogs (Rosie and Freyja), and hit play.

In the movie, “When a team of mercenaries breaks into a wealthy family compound on Christmas Eve, taking everyone inside hostage, the team isn’t prepared for a surprise combatant: Santa Claus (David Harbour, Black Widow, “Stranger Things”) is on the grounds, and he’s about to show why this Nick is no saint.”

David Harbour has proved his acting talent in “Stranger Things,” so I had high expectations that he’d nail a badass Sants, and I was not disappointed. Between his battles with the bad guys, we see the tender side of old Saint Nick when he comes in contact with a little girl, played by Leah Brady, who reminds him why he does the job. But don’t get it twisted; give Santa a hammer and sit back and watch him bust some heads.

Violent Night is near nonstop action, ultra-violent, blood-drenched, and filled with cool kills. It’s entertaining as hell, but know this, the movie is strictly for grown folks. I would not recommend letting your kids under 16 watch it.

Violent Night is my new favorite Christmas movie and will be a new tradition, a movie to be watched every year. 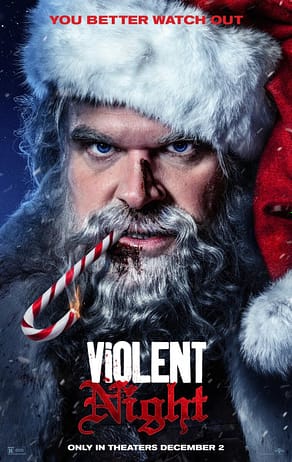 ← Prev: Horror Fuel's Top Horror Games Reviewed In 2022 Next: Bask In The Ambiance Of The "Chucky Yule Log" (Video) →