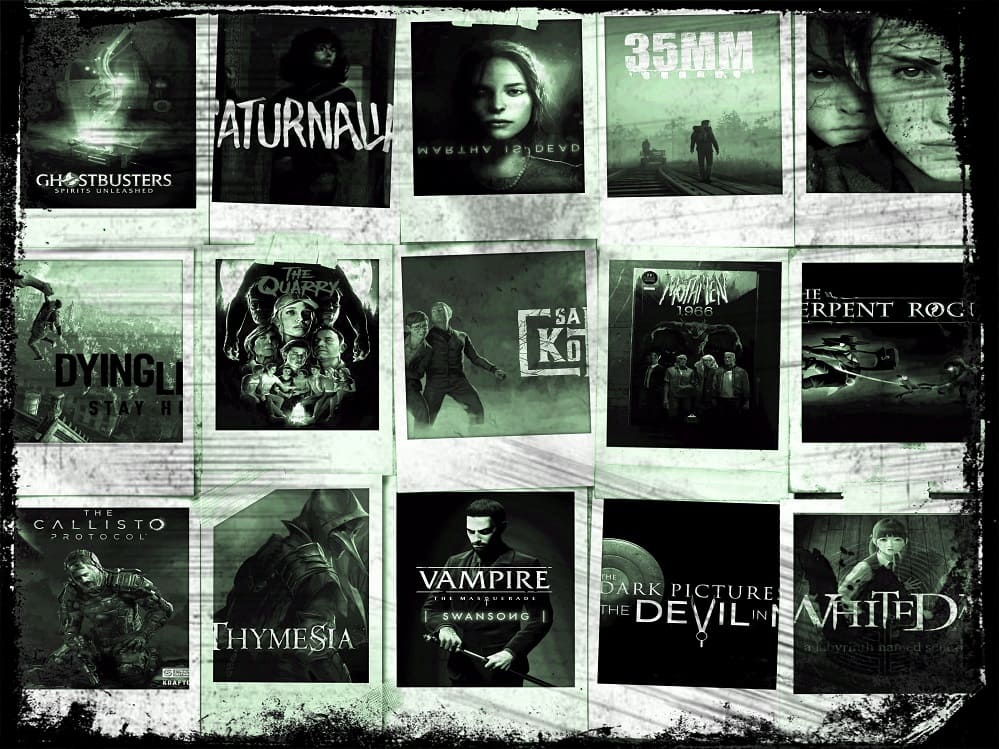 It’s that time of year as 2022 is coming to a close and along with it many game releases. This year was a busy review year, and going through the list I was able to come up with 15 horror games that I reviewed ranked from bad to good. It’s a long list so let’s start with one of the worse games reviewed this year, shall we?

This Russian-made first-person game is labeled as a “Survival Horror” taking place in a post-apocalyptic world. The scariest thing about this game was how horrifically boring it was with a lack of scares and action. The game is more of a depressing walking simulator.

An 80s-style DOS game about a group of characters trying to survive a night with multiple Mothmen attacking them. The premise sounded promising but the game copped out on that. The game’s slow pace, and abrupt ending (just as a story was actually forming!) I wanted to give this retro-revival a chance but it betrayed me.

This third-person RPG takes players into the roles of three vampires in modern Boston trying to uncover a conspiracy after a series of murders against their own kind by an organization kicks off suddenly. though the gameplay and the story were good, the game’s attitude toward new players (assuming they know the complete lore of the game’s world), meh voice acting, and cheap-looking graphics made the game’s playthrough a bit rough.

This souls-style game takes players to a plague-filled city where Corvus, our hero, must regain his memories by fighting and dying his way through the world. The game was quite fun to play once you can control how frustrating it makes you when dying over and over is part of the game. Its world, story, and atmosphere were good along with a probability of replayability, but the cut-off of your character’s perks allowing them to only get so strong as enemies and bosses only get tougher does make you want to just stop playing altogether.

Players are taken to a mysterious Croatian village where they can switch back and forth between two characters on a journey to uncover the village’s dark secrets that put them at risk. Unfortunately, the long-winded dialogue and ridiculously complicated controls really put a damper on a promising story.

This South Korean first-person horror takes players into a school after hours as Hee-Min Lee, a high school boy who wants to leave a gift for a crush of his but is stuck inside the haunted school. The game was decent but the puzzles were too difficult (and required speaking/reading knowledge of Korean/Chinese), and lack of supernatural threats (the Janitors are trying to kill you for some reason, I don’t remember it ever being explained.) Took a promising game out behind the bleachers to be robbed of its lunch money.

Inspired by the Giallo style of cinema, players are taken to the Italian island of Sardinia where they take on the role of one of four characters trying to survive the night in a village where a ritual is taking place and a  horned creature stalks the streets. The premise was good, the animation unique, but there was an issue with the lack of voiceovers, complicated controls, and confusing timelines within the story itself, but other than that it was actually quite unique and decent.

This third-person adventure game has players taking on the role of a little plague doctor/alchemist saving the world from an awakening evil. The game’s unique art, and storytelling. Collect and experiment with alchemical ingredients to fight monsters with a soul element where you can potentially lose items forever if you die more than once. The game may not be perfect but given that it was made in the middle of a warzone and was still released shows the heart the creative team has over AAA companies who can’t put out a complete game with their larger funds and workforce.

In the countryside of Italy in the middle of WWII players take on the role of Guilia who accidentally takes on the role of her twin sister Martha after Guilia found that she committed suicide. This haunting game mixes supernatural elements and mystery while at the same time disturbing the player with subject matter that’s admittedly quite intense which would explain why it was heavily edited on the PS4/PS5 versions. The story is really good but if you’re emotionally triggered easily, you may want to pass.

The hype was real but some have been disappointed after this game’s release by the same creative mind behind Dead Space. Many were expecting a copy-and-paste Dead Space experience only to be given an all-new story. With the exception of frivolous complaints about this game, the only major glaring issue that everyone can agree on was that the controls for combat were way too complicated. The game could have used some more scares but other than that, I thought it was actually pretty good.

This interactive movie by Supermassive Games takes us to a summer camp where the choices made by players will decide the fate of each camp councilor that has found themselves trapped at the remote campsite during a full moon and with werewolves running amok! The game was a lot of fun to play and quite rewarding when you find its secrets!

In the sequel to the 2015 hit, in this players take on the role of Aiden, who is in search of a way to prevent his zombie infection from spreading and making him one of the walking/parkouring dead! This game’s map dwarfs the first game as new means of traveling, parkouring, and fighting along with new enemies types and choices that can change how the story goes, players will have a lot of fun making this city their playground.

Players take on the role of either a Ghostbuster or a Ghost where they can team up with either friends online or AI bots and either bust some ghosts or slime some ghostbusters. Fans of the original films along with the new “Afterlife” film series will find this game to be fun, especially with all the new free DLCs that going to be coming out in 2023!

Down to the final two! This was really hard to pick the best in my opinion as both were really good in their own ways. So without further ado, here are my top two best horror games of 2022.

The Dark Pictures Anthology: The Devil in Me

In the season finale of “Season One” of the Dark Pictures series, players take on the roles of members of a film crew trying to make a documentary about H.H. Holmes only to be caught in a game of cat and mouse trying to survive against a serial killer once thought to be dead. Thought I thought maybe the story could have been improved as it seems to follow the same formula since Man of Medan, this game really picked up on the jumpscares that were missing from House of Ashes.

The sequel to A Plague Tale: Innocence, this game picks up where the first left off where players take on the role of Amicia as she tries to protect her little brother Hugo from the horrors of his affliction and how it’s connected to the plague that’s ravishing the world around them. With a mix of intrigue, horror, beauty, and heartache, this game hits differently on so many levels with its impressive graphics, mechanics, lighting, and soundtrack, this is why it’s my pick for the best of 2022 that I’ve reviewed.

Another year in the can, but here’s to hoping that 2023 has some good games on the horizon for us all to enjoy and be scared by! Here’s to a Happy New Year, everyone!