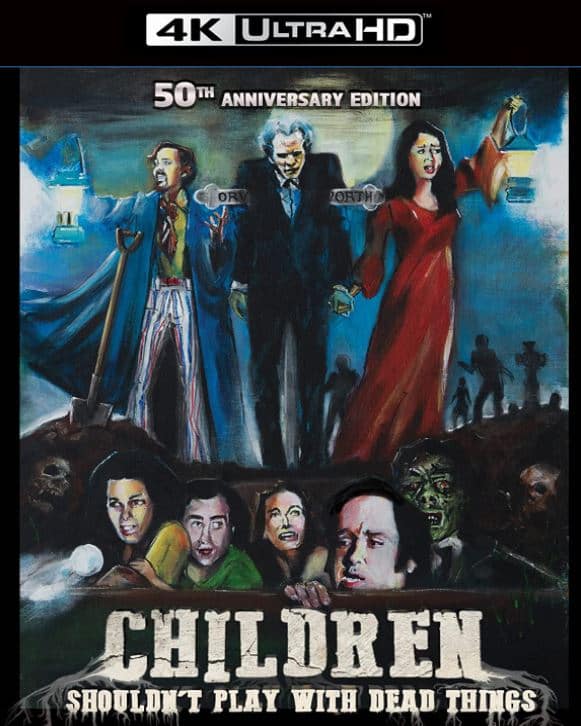 Comin’ straight from Bob A Christmas Story Clark (okay he also gave us the original recipe Black Christmas and Porky’s) Children Shouldn’t Play With Dead Things, concerns  the mystic misadventures of Alan (played by the film’s co-writer Alan Ormsby); a truly pretentious prickus of a man who just so happens to be a stage director.

Why is that important? Because he has a whole troupe of actor’s and stagehands at his service… mostly  because if they go a single pussy hair out of line he goes psycho and threatens them with their jobs… which is handy when he gets a wild hair up his ass to head to a deserted island of the coast of Miami and try to resurrect the dead… as one fucking does.

Well after a bit of ass-foolery involving a bum spell from Alan’s extensive arcane studies, the thespians manage to dig up a stiff, which Alan demands be taken to the abandoned cabin they are residing in for the night.

Of course Asshole Alan actually managed to read those wicked words right as rain and soon the living dead are knocking at their door!

Children Shouldn’t Play With Dead Things really rocks the ol’ haunted house because of the dark paths it’s willing to take. There is little doubt Alan really wants to bang the corpse the ghoul gang dug up, and just the sequences of Alan mocking the corpse and using it as a type of real-life set decoration are suitably morbid.

And then there’s Alan himself; an over-the-top, flamboyant “artiste” that possesses a mean-streak a mile wide, a shocking level of cowardice when faced with any real threat, and a hard-on for the dead… and that are his good qualities! It’s a deceptive performance from Ormsby that teeters on the edge of absurd before turning uncomfortably psychotic; it’s an incredibly well-done performance indeed.

Special mention must be made for the last act paradigm change where things go from proto-Evil Dead (we get the spells and abandoned cabin here) to pastiche of George A. Romero’s 1968 seminal walking dead masterpiece, Night of the Living Dead; replete with awesomely-gnarly zombie make-ups if a bit less flesh-munching.

Adding to the enjoyment of the monstrous main event are a coffin load of bonus material kicking off with an archival audio commentary track featuring Ormsby, and actresses Jane Daly and Anya Cronin (formerly Mrs. Ormsby) and moderated by Severin film’s David Gregory that takes us through a fun and lively remembrance of the film’s production.

Also included on Disc One (the 4K UHD) are a documentary covering the horror biz of Clark, as well as the film’s theatrical trailer (which is an experience in itself and shouldn’t be missed!).

Moving on to Disc Two we have a Blu-ray presentation of the film utilizing the same transfer used for the 4K which provides an upgrade to VCI’s previous Blu with better color and saturation, as well as deeper blacks, as well as lessened grain.

The special features present here are a mirror to Disc One, but don’t fret cats n’ creeps, we ain’t done yet!

Disc Three is a Blu containing even more sinister supplements that get under way with a new interview with Ormsby (the audio is a tad dodgy by VCI’s own admission, but the material is gold), followed by an interview with Art Department maestro Ken Goch, who offers some solid anecdotes on the film’s production, a Q&A session from 2007 with the film’s cast and crew from the New Beverly, and a brief retrospective on Clark’s life and career.

Also included are a photo gallery, a duo of incredibly rockin’ music videos by a band named The Deadthings (think prime-era Sunset Strip sleaze rock by horror fans… absolutely loved these videos!!!), a tribute video (in essence a second photo gallery), and a collection of radio spots (which also includes bonus facts on screen throughout, including mention of the toy Ormsby created; Hugo: Man of a 1,000 Faces… a true mother fucker of nightmare fuel made plastic… his face haunts my dreams… ).

Additionally the release features a booklet of liner notes, and a reversible sleeve.

To put a beastly bow on it; Children Shouldn’t Play With Dead Things is a bizarre and thoroughly entertaining regional horror comedy with the ghastly good sense to go dark as Dracula’s cape!