CD Review – Midnight Syndicate Creates an Awesome Soundtrack to Zombies!!! The Board Game

Creating a soundtrack for a board game. How exactly does anyone do that? Well, one only needs to point said query to the masterminds/madmen behind Midnight Syndicate – Edward Douglas and Gavin Goszka. Their most recent release, ZOMBIES!!! Official Board Game Soundtrack, offers a definitive answer to this question.

Back in my D&D (which they have also done an album base on, WOOHOO!), Call of Cthulhu, Shadowrun and “roll playing game that a group of us created, but came up with no name for” days, I remember game-play situations taking shape in my mind as if they were scenes in a movie. I imagine that composing music for the elements and situations within this game must have been done in a similar fashion.

Then again…maybe that’s not how Douglas and Gozska conceptualized the scoring of ZOMBIES!!!. Seriously, what do I know about composing music in any way, shape or form, let alone composing the way they do? Nothing. What I do know – this soundtrack consists of one incredible track after another. Their use of orchestral composition, blended with elements of industrial music and mingled with background sound effects, gives their music a distinctive style, depth and texture.

While listening to each track I find myself constructing a scene from a zombie movie that has yet to be written. Now the scene I imagine, or that you imagine, or that they imagined as they wrote the music, may not be the same. That doesn’t matter, because everybody’s concept of how the scene should play out in their imagination is valid.

Now, I’m not going to bore you all with a complete breakdown of each track, but I will point out a few personal favorites.

Track 1, “It Begins”, is a juggernaut of a track that has the feel of Howard Shore’s “Isengard Theme” from Fellowship of the Ring. Over the top of the thundering percussion are perfectly paced piano motes that add a foreboding twist, a la John Carpenter. It kicks off the album pushes you forth into the fray, whether you want to go or not.

Track 4, “Slight Miscalculation” brings to mind a situation that where once there were few, now there are many. And when I say many, I mean many zombies. Perhaps one or more people had planned an escape route thinking there were fewer zekes ambling about only to realize they made a miscalculation and a group of stragglers became something of an all-consuming herd.

Track 8, “Town Square”, is a low, creeping and somewhat tense piece that evokes visions of survivors very stealthily trying to make their way through the town square without attracting unwanted attention. Basically, you may not want to take this path, but there is NO other way.

Track 10, “Raiding Todd’s Tool Shop”, is both eager and frantic as obviously one or more folks find themselves inside a tool shop with a bevy of items that can be turned into zombie killing weapons. BUT, ya’ll better grab your killing implements quick, because something seems to want in.

Track 11, “Veiled Hunter’, is sly with an element of danger and brought two distinct images to mind. The first being a character much like Michonne from The Walking Dead, a hooded character concealing their identity while deftly dispatching the walking dead. The second being someone attacking the zombies quickly, with lightning speed, from places of concealment before retreating to lie in wait for their next victim(s).

Track 16, “Dusk”, creates a sense that as daylight is dying hope and courage are following suit. Increasing darkness can only be followed by increasing danger, and perhaps death is lingering not too far behind.

Again, this is just my interpretation of the few tracks I have briefly described. It has always been my opinion that the largest portion of their albums except for those with obvious association to a film, are like soundtracks to movies not yet written. That’s one of the best aspects of their music is that it can elicit a unique visualization within one’s mind,. Thus you get to use your imagination to create your own distinct movie, scored with their music.

This album gets a richly deserved 8.5 / 10. And while I would be more than happy for you readers to take my word for it, you should all definitely seek it out and give it a listen for yourselves. It’s available for purchase (as are all of their other albums) on iTunes, Amazon and cdbaby. You can also find out more about Midnight Syndicate at their website or by following them on Facebook and Twitter.

← Prev: Delve Into The Perils Of Modern Dating In The Trailer For Slasher.com Next: Bill Moseley Stars In The Possession Experiment - Coming Soon To Digital HD → 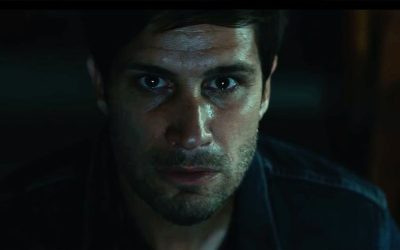