On February 27, 2017 a staff member of Miguel Couto Hospital in Rio de Janerio, Brazil recorded footage of hospital staff interacting with a man who had been shot in the face. The other part of the story, he is allegedly suffering demonic possession.

According to the Brazilian newspaper Noticianob, the man was brought into the hospital after being shot in the face while high on drugs. But many are saying he was possessed, including the hospital staff. There is no word on exactly who shot him or why.
In the footage you can hear staff in the background saying (in Portuguese), “You are not powerful! You are not powerful!” The man responds with “I am better than you. You are corrupted. I am working with Lucifer.” The staff used gurneys and chairs to keep the man at bay.
If you believe in the supernatural, the video may lead you to believe that something otherworldly and powerful is at work. Honestly, we can’t say what the true cause was for his strange behavior, but possessed or high, the video is creepy as hell. Take a look.
WARNING! VIEWER DISCRETION ADVISED!

← Prev: An Interview With Tami Stronach Actress, Dancer, Educator, And Star Of The Never Ending Story Next: A First Look At The Paranormal Drama 'A Ghost Story' → 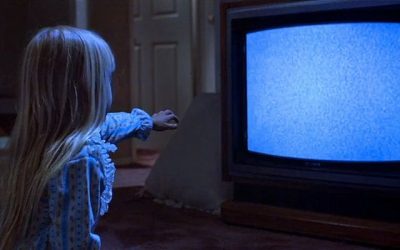 They’re heeere …   One of the most iconic paranormal horror films ever made, 1982's Poltergeist, is coming to 4K...