Putting Opinions To Bed After Watching All Three ‘Ghostbusters’ Films

In recent years, there’s still a lot of talk about the “Ghostbusters” franchise, may it be about the anticipation of the long-awaited third installment, or the controversy still plaguing the 2016 reboot. The reboot has caused such a flare-up of toxic masculinity/femininity that it’s one of those films no one really wants to talk about or get into. Well, I don’t really have an opinion on the reboot because…I’ve never seen it, so I wanted to change that. I decided to do a “Ghostbusters” marathon and watch all three films in a row and give an honest opinion on them.

To keep it fair, I watched the theatrical versions of all three. I can’t really say a whole lot about the first (original) film Ghostbusters because out of the three it was the best. The problems seem to start with Ghostbusters 2. The problem right away in the 1989 sequel is there seems to be a major plot hole in the story, no one believes the Ghostbusters…even after what happened with the events of the first film. The first film ended with crowds cheering on the heroes after defeating Gozer and covering a section of Manhattan in melted marshmallow. The lack of explaining what exactly happened to our heroes to fall from grace makes the first half of the film a head-scratcher.

I’ll give the movie this, Peter MacNicol was scary AF

Ghostbusters 2 did not do well with critics and fans for various reasons, one of them mainly being that it lacked the feel of the 1984 film and the “rebuilding their reputation” aspect. Some background of what went on prior to the film, the animated series The Real Ghostbusters (1986) was a big hit on TV and the merchandise was selling like crazy. Because of the success of the series, Columbia Pictures pushed for a film sequel even though Dan Aykroyd, Harold Ramis, and Ivan Reitman were not thrilled with the idea since the first film implied the story was over.

Now jumping to the 2016 reboot… first, I want it to be clear, this is my first time seeing this film, and as hard as it may sound, I did not really read what critics had to say about it. I definitely did not pay attention to what the internet said because of the warring factions of out of control Misogynistic/Misandristic opinions over the casting. So I wanted to go into it with an open mind even though I don’t like reboots of films…name one moviegoer that does. With that said, here’s what I think.

The 2016 remake was, alright at best. What bothered me most was the story felt rushed as no details were put into making the story believable or on par with the original. What annoyed me was there’s no development of the villain (Neil Casey), no motive really given except he’s an awkward genius that hates people, very cliché, done a million times, bland. This was the first time we had an actual (living/not possessed) protagonist in a “Ghostbusters” film and they did not capitalize on the potential.

When it comes to the comedy, a lot of it was forced and too much, what I mean by too much is that the one-liners or banter just never stopped that when something actually funny happens or is said you almost miss it. Chris Hemsworth and Leslie Jones were probably the funniest out of the main cast. Hemsworth playing the dim bulb receptionist Kevin, he’s hunky as well as a dork, different from what I’m used to seeing him play, I could not help but chuckle at his antics.

A lot of the zingers and silly bits did not fit in most of the scenes, especially depending on what’s happening at that moment, in short, there was no perfect balance of comedy and storytelling. If the writers did not focus so much on trying to take advantage of a cast of comedians they would have noticed a massive plot hole in the story where Kristen Wiig’s character towards the beginning was excited because she saw a ghost for the first time, but later on she’s retelling that she saw a ghost when she was a kid and the only person who believed her was Melissa McCarthy’s character.

Now some behind the scenes info, ever since Ghostbusters 2 there’s been talk about doing a third film for years. There’s been trouble getting Bill Murray to commit to a new “Ghostbusters” project since he felt the 1984 sequel did not perform well. Aykroyd did not want to recast Murray’s character as he felt that Murray was an important element to the cast. The crew did get back together and reprised their roles in the 2009 video game, Ghostbusters: The Video Game. The game was a success and Aykroyd even said he considered it to be the third film.

Because of the success of the game, Columbia Pictures and SONY wanted to capitalize on it and pushed hard for a third installment to the franchise which led to more issues with Murray. Reitman suggested a reboot since Murray would not commit to any projects. The reboot was going to be written by Aykroyd, Reitman, and Etan Cohen. After Harold Ramis’s death in 2014, the idea fell into limbo but Reitman stayed on as a producer to help work on the script that would have the Ghostbusters as minor roles.

Six months after Ramis’s death, Columbia announced they picked Paul Feig to direct the “Ghostbusters” reboot, in which he was also the writer and executive producer of the film. He co-wrote the reboot with Katie Dippold. Feig said he believed many writers avoided writing the scripts because they did not want to ruin the “canon” of the story, so a fresh start with new characters would make it easier, learning from the mistakes made in Ghostbusters 2. In fact, it was history repeating itself.

The question about whether or not making a female reboot is what resulted in the 2016 remake bombing at the box office is irrelevant. If you had an all-male cast, hell, the original cast with the same script/plot used in this film, it would have bombed too. Because the studios were desperate to capitalize on the success from parts of a franchise caused poorly thought out scripts.

The plot for the 2016 remake could have shut up the naysayers if that instead of being a new story, it could take place in the same one by simply making it that the four women were in charge of a Houston or L.A. branch of a chain of Ghostbusters’s services, with the NYC branch being the “home office”. Not that complicated, you got your third film, you got a new cast, and you’re still technically carrying on the lore of the first two films, but I digress. The upcoming third film being written by Jason Reitman (Ivan Reitman’s son) and Gil Kenan is set to be released in 2020, the only question is, will history repeat itself one more time? 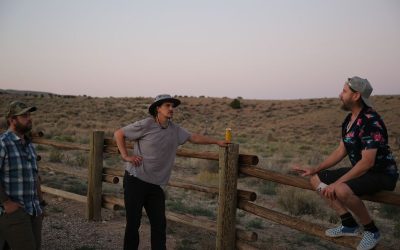 Jack Osbourne is taking viewers to the edge of the unknown in the new, two-hour special, "JACK OSBOURNE’S NIGHT OF...