When you hear of a serial killer, you automatically picture a deranged individual not afraid to get their hands dirty and get up close and personal with their victims. In movies we see a lot of killers so evil that they are capable of getting others to kill for them, thus keeping their hands clean of the crime…that’s just fantasy, right? In Japan, where major crimes are so rare that they don’t make national news, but one criminal, though not talked about much in the media anymore, is engrained in the public consciousness, Futoshi Matsunaga, the infamous Mind Control Killer.

By clinical standards, Matsunaga is the perfect example of a Psychopath, someone who feels no remorse or emotion when it comes to right and wrong, since he was young he stood out from his peers as he was very social, gifted with a silver tongue it seems and was a disciplinary problem in high school. At 19 he married and had a son, while he was married he had multiple mistresses before finally setting his sights on an old friend from school, Junko Ogata, who will play a major part in his crime spree. 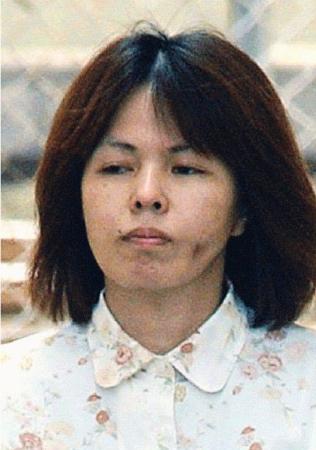 It’s the 1980’s and Matsunaga and Ogata are together, thanks in part to Matsunaga’s gift of blackmailing, and opened a business which was a front for Matsunaga to do what he does best, swindling people out of money which by 1992 he and Ogata were able to steal upwards to $2.2 million through schemes and blackmailing resulting in the two to flee as they became part of Japan’s public enemies.
In 1993, Matsunaga wooed a married woman and a mother of 3, to move in with him and Ogata (who was posing as his sister), which the woman more than happily did.  Sometime later in April of that year after moving in with him, one of the woman’s children died mysteriously prompting the other two to go live with their father, by March of 1994 that woman was dead after being swindled out of $145,510. It’s never been proven, but police suspect that Matsunaga murdered the woman and her child making them his first victims.
Later in 1994, a man Matsunaga met before who confided in him of his criminal past, became his next victim. Matsunaga used that information to blackmail the man (Kumio Toraya) so he and Ogata could live in his apartment. Toraya and his Daughter were held captive in the apartment for two years, the whole time Matsunaga tortured Toraya with electric shocks and forced his own daughter to bite him. Toraya died from the torture in February of 1996, Matsunaga convinced Toraya’s Daughter that SHE killed him and made her, along with Ogata, dismember Toraya’s body and boil his remains in pots in the kitchen before pulverizing them and going out to dump the remains at sea.

Shortly after killing Toraya, Matsunaga, Ogata, and now Toraya’s Daughter all lived in an apartment together and Matsunaga found a female acquaintance of the late Toraya who he convinced to move in with him as he wants to marry her. The woman along with her daughter did move in with the trio and was soon held captive; Matsunaga defrauded the woman out of $69,066. In March of 1997, the woman escaped by jumping out of the apartment window (which is on the second floor) surviving the fall and prompting her daughter to be released and the trio to flee.
In April of 1997, this is when the worse and possibly most horrific of Matsunaga’s crimes take place. Matsunaga’s helper Ogata decided she wanted out of this partnership. During the time she and Matsunaga were together, she held jobs and would go to work but one day she did not return but instead went into hiding. Matsunaga called her family and threatened them, especially Ogata’s Mother Shizumi who he raped back in 1985 after she did not want her daughter to be with him. The attempted threats and blackmail failed for Matsunaga which led to possibly the most messed up chain of events straight out of a crime horror. 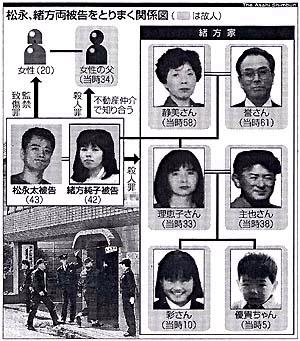 Matsunaga faked his death (a suicide), as a result, this made Ogata come out of hiding and return to her family home. Matsunaga followed and as retribution, raped Ogata’s Sister Reiko and made the family give him $777,116 so he would leave them alone, but after getting paid, he was just getting started. Matsunaga held the entire household (Ogata’s parents, her sister, and brother-in-law, and their two children) captive. Here the psychological torture began and in a strange twist, Ogata’s sister and brother-in-law began to admire Matsunaga, and their two children, Aya (10) and Yuki (5) were enamored with him. After winning over most of the household, the killings started.
Matsunaga made Ogata use a stun gun on her own father, Takashige (61) tasing him to death on December 21, 1997. Shizumi, Ogata’s mother, at this point suffered a mental breakdown that lasted up to her death on January 20, 1998, when Matsunaga made Reiko strangle her own mother while her husband (Kazuya) held her down. Weeks later he made Aya hold Reiko (her own mother down) while her father strangled her. Matsunaga and Ogata sealed Kazuya in the bathroom where he starved to death on April 13, 1998. Matsunaga then made Ogata and Aya strangle Yuki. Aya’s fate is unclear as there are two accounts of how she met her end. Toraya’s Daughter, who was present in the home at the time of the killings, said that Matsunaga and Ogata tortured the ten-year-old to death with a stun gun but Ogata claims that Toraya’s Daughter strangled the child. After Ogata’s family was wiped out, Matsunaga made her dismember and boil the remains of her family which the remains were flushed down public toilets and dumped at sea.

In July of 2000, Matsunaga met a woman who he convinced he was going to marry, and in 2001 she gave over her twin sons to him and Ogata who in return requested she also give them $246,580 to care for the boys. Things began to fall apart for Matsunaga in January of 2002, when Toraya’s Daughter, now 17, escaped not once but twice. After her first attempt in January, in which Matsunaga and Ogata brought her back to their apartment where she underwent torture, the second escape occurred in March but this time Toraya’s Daughter made it to the police.
Matsunaga and Ogata were arrested, the authorities also raided the couple’s apartment where they took the twin boys from before, along with the couple’s actual children that they had together during their time on the run together, into protective custody. Ogata confessed to her role in the crimes while Matsunaga claimed his innocence and that Ogata and Toraya’s Daughter are the real killers trying to blame him for it. In the end, Toraya’s Daughter was never charged with any of the crimes as authorities felt she’s been a victim from the very start and was held against her will during the years on the run with the couple.
In 2004 Futhoshi Matsunaga and Junko Ogata were found guilty and in September of 2005, they were sentenced to death by hanging. The couple appealed their sentences in 2007, Matsunaga will still eventually hang but Ogata had her sentenced reduced to life without parole as the high court felt that she would not have committed the crimes if it was not for Matsunaga’s influence. Matsunaga is still on Japan’s death row, given Japanese law, he will not know when his execution is till the guards come to take him to the chamber in which he will be hanged. 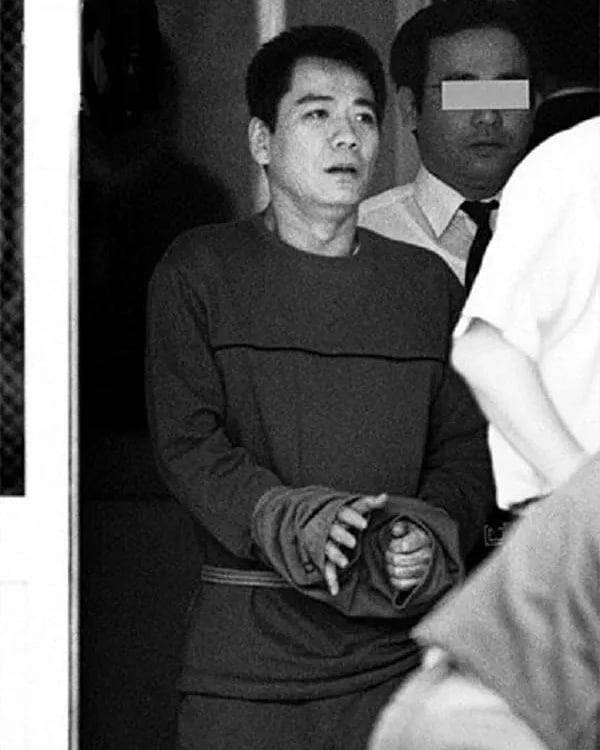 The whole ordeal of Japan’s Mind Control Serial Killer has inspired the 2019 thriller The Forest of Love which was released on Netflix in October of 2019. The film follows a group of filmmakers and a shy young woman who all fall under the manipulating spell of a man who eventually introduces murder to the mix.

← Prev: 'Shock Docs: The Devil Made Me Do It' Delves Into The True Story That Inspired 'The Conjuring 3' Next: 'Open Your Eyes' And Witness This Horror Thriller's New Trailer →