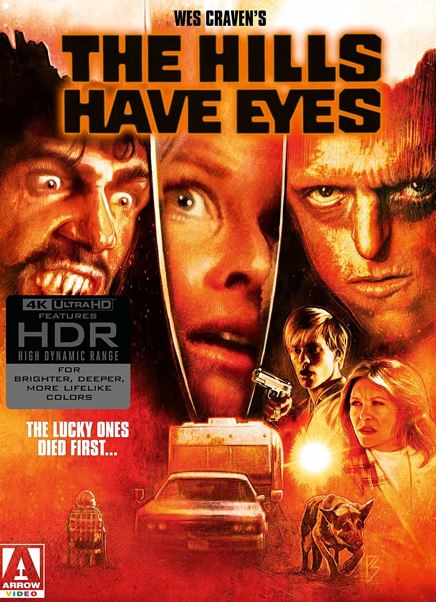 The Hills Have Eyes concerns the misadventures of the Carter family; their ranks including racist ex-cop/top-shelf blowhard professional map-hatin’ man Bob and his complete dumb-ass of a wife Ethel, along with their (definitely not fucking each other) teenage kids Bobby and Brenda, older daughter Lynne, Lynne’s husband/Sonny Bono look-a-like champion of 1977 Doug, their infant daughter, and those lovable if overly-aggressive canine lovers, Beauty and Beast, as they decide to explore a silver mine in Nevada on their way to a California vacation (well, the dogs don’t… or maybe they are down with it… no one ever solicits their opinion on the matter).

This proves to be a truly fucking stupid idea, as after a local yokel warns them repeatedly that the area is not a place to be fucked with in any way, shape, or form, the family goes flying off the only road for miles in a madcap incident involving a jet plane, a massive map, a rabbit, and an outrageous act of acceleration… and find themselves in the hunting grounds of a crazed group of cannibalistic mutant primitives who proceed to go absolutely shit house on our heroes in various and sundry ways including (but in no way limited to): a crucifixion/immolation number that is always so popular with the kids, animal cruelty that leads to a rather hard to swallow meal, rude-as-hell grocery stealing, fuckin’ spot-on animal calls, arguing with a German Shepard… and more!

Now the Carter Clan will have to use any means necessary if they are to survive the night, including becoming as savage as those that hunt them like human cattle!

Let’s just cut to the chase; The Hills Have Eyes is a classic of horror cinema; I love the ever-lovin’ shit out of it, and chances are all of you in my Coffin Club dig on it too, and the reasons for it’s legendary legend status are numerous… and I shall name some of them… now. Right now.

First of all, the atmosphere in this fright flick is tight and outta sight! The barren desert makes for a suitably isolated environment, the usage of broken radio chatter to build suspense, the absolute wild abandon in which the film’s gnarly antagonists fly in the face of sanity and any semblance of social grace… which brings me to my next point…

The social commentary present here is rather timeless with the “modern” suburban man merely hiding their aggression and wildness beneath a veneer of Tupperware faces and cook-out cologne, while the film’s motley crew represent a more natural state of man… feel free to sip an espresso and discuss that shit on your own time.

Also the actors chosen to play those murderous mutants are the cream-of-the-creepy crop, with horror icon Michael Berryman in his most famous role as the misshapen madman who is as without compassion as he is hair follicles, James Whitworth as the family’s scarred man-mountain patriarch, Pluto who’s insane monologues have to be heard to be believed, and Lance Gordon as the razor-toothed, bird chomping, human sound effects machine Mars being the major movers and shakers.

On a brief side note, Janus Blythe provides a nice touch of humanity to the murderous madmen as Ruby, the most innocent and sympathetic of the freaky family… a wild woman that just wants to leave her past behind and join society.

As a counter-point, the protagonists are all played as outrageously broad as the villainous boils n’ ghouls mentioned up yonder, and this adds some comedic overtones, which mirrored writer/director Wes Craven’s previous foray into the horror biz, 1972’s The Last House on the Left which definitely knew how to cut the tension with a ridiculous comedy sequence or two along with a wacky music cue… speaking of which…

The desert isn’t far from the disco judging by some of the dance ready percussion that is peppered throughout Don Peake’s moody score that also contains plenty of electronic stings and primal soundscapes.

As for  bonus content on this 4K UltraHD from Arrow Video; we have carry-overs from Arrow’s previous Hills release from 2016, namely: commentary tracks from Wes Craven and producer Peter Locke, a cast commentary, and a commentary with film scholar Mikel J. Koven (in which the legends that inspired the film’s story are explored), interviews with actor Martin Speer as well as composer Peake, a collection of outtakes, a gallery of posters and lobby cards, trailers/TV spots, and the option to watch the film with its alternate ending in place (the ending is also included as a separate extra).

Also included are 6 postcards, a reversible fold-out poster, and a 40-page booklet featuring writing from critic Brad Stevens and a retrospective of the Hills franchise by Arrow producer Ewan Cant, and a reversible sleeve featuring new artwork from Paul Shipper.

If this release were just to be judged solely on the well-established rad-ass awesomeness of the film, I would tell you to immediately pick this up; but The Hills Have Eyes has never looked better than here… so beastly bonus!