Movie Reviews: “Night Caller” and “Crabs!” (Another Hole in the Head Film Festival)

You’ll probably feel like you need a shower after viewing writer/director Chad Ferrin’s Night Caller. This paean to grindhouse gorefests oozes a 1970s vibe from practically every frame. The film is lurid in both senses of that word, from its color palette to its graphic violence. It pays obvious homage to Maniac (1980) with its killer’s method of murdering and scalping victims as it name checks — with video clips — psychic horror of the past such as Patrick (1978) and some public domain fear fare, with some spaghetti western and Laurel and Hardy references, as well. Clementine Carter (Susan Priver) works as a telephone psychic with boss Jade Mei (Bai Ling) when she begins receiving calls from a serial killer, whose upcoming acts of violence she sees in visions as they talk. As Clementine tries to solve the mystery of just who the fiend is, she brings danger closer to her elderly father (Robert Miano as Charles Carter), Jade, and herself. Ferrin gleefully deals in excess, and keeps a consistent vision as he and his cast play Night Caller straight, making it all the more disturbing. A supporting cast of horror and genre film stalwarts including Steve Railsback, Kelli Maroney, Lew Temple, Robert Rhine, and James MacPherson join the leads in displaying a wide range of performances ranging from quite good to scenery chewing. Potential viewers take note: Misogyny, homophobic and sexist slurs, and over-the-top violence including cringe-inducing necrophilia with knives as phallic objects abound. You can tell by now whether this is your type of movie, and I’m admittedly not part of the target audience for Night Caller. It is well made, though, with solid production values, and it pulls no punches in what it sets out to do. There’s a stinger after the end credits, for those who make it that far. 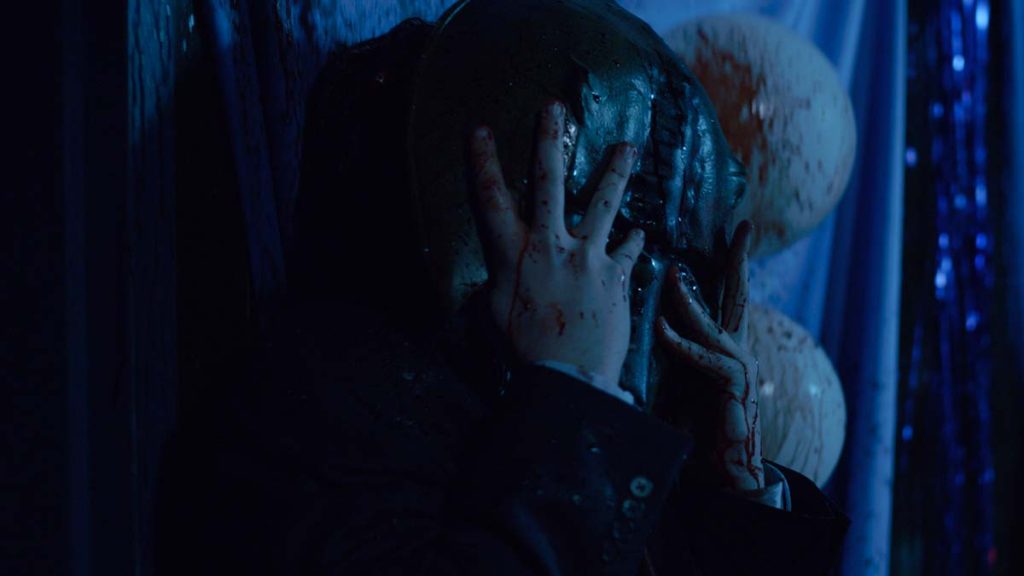 Creature-feature–comedy fans with a penchant for the absurd should find plenty to smile about with Crabs!, written and directed by Pierce Berolzheimer. A mash-up of Roger Corman and Troma monster-movie approaches with kaiju, tokusatsu, and weird-science elements, the film throws political correctness out the window with crass jokes aimed at its wheelchair-using protagonist and a vaguely Eastern European foreign exchange student, among other targets. Crabs! does have a big heart, though, boasting likable characters and some genuinely sweet moments to accompany its impressive gory practical effects — it may feature the bloodiest prom scene since Carrie (1976) — and deliberately exaggerated low-budget CGI effects. Self-proclaimed “handicapable” teen paraplegic and science-gizmo whiz Philip (Dylan Riley Snyder), his bubbly and equally intelligent girlfriend Maddy (Allie Jennings), his stoner deputy sheriff brother Hunter (Bryce Durfee), and Maddy’s crush-of-a thousand-students science teacher mother Annalise (Jessica Morris) band together to fend off an invasion of human-hunting horseshoe crabs in their small coastal town. Luckily, Philip has just recently received delivery on an imported power gadget that may help stem the tide of these creatures, which range in size from normal to — well, you saw the word “kaiju” above. Crabs! is silly and sometimes corny, but always entertaining, with solid performances driving its story. Berolzheimer knows exactly what he wants to do with this film, and he delivers the goods in a valentine to classic-era creature features (such as Attack of the Crab Monsters [1957], obviously, with more than a mere wink and a nod to Gremlins [1984]) done in the style of more recent send-ups such as Zombeavers (2014).

Night Caller and Crabs! screen as part of San Francisco’s Another Hole in the Head Film Festival, which takes place December 1st–15th, 2021 with an offering of over 25 features and 200+ short films. The majority of content will be available on-demand via the Eventive platform, plus live online screenings with audience interaction and filmmaker Q&A on the Zoom platform, plus the long-awaited theatrical screenings at New People Cinema in San Francisco’s Japantown.

← Prev: A Witch Is Unleashed In 'The Unkind' Trailer Next: The U.K.’s Horror-on-Sea Film Festival Announces Its Full Lineup for 2022  →