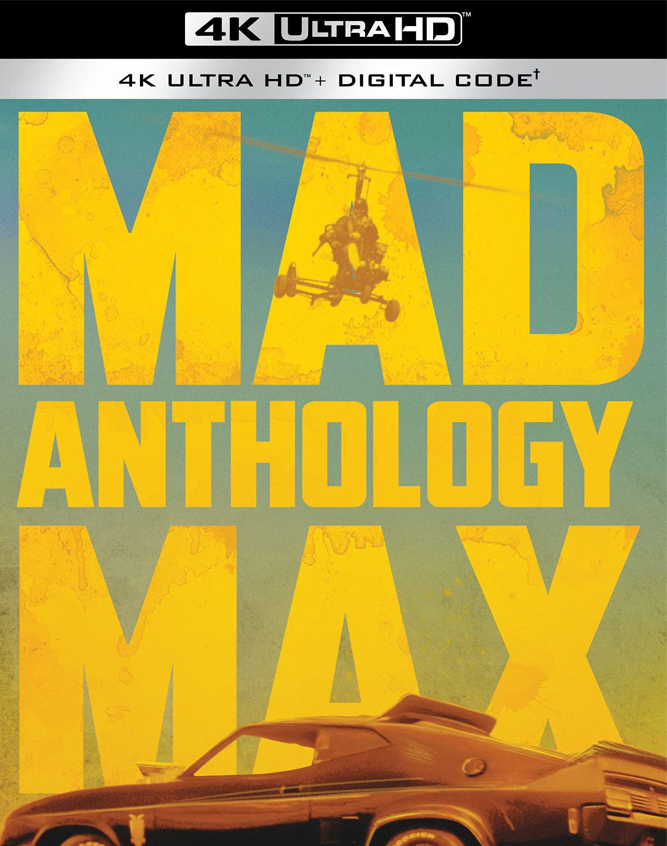 Warner Bros. Home Entertainment provided me with a free copy of the DVD I reviewed in this blog post. The opinions I share are my own.

As if you couldn’t guess from the above. our pals over at Warner Bros. Home entertainment have just released a swell collection of George Miller’s entire Mad Max franchise, all on glorious 4K UHD so you can see every dry grain of sand in those barren locales.

Just a few minutes into the future, the roads down Australia-way are a complete battleground thanks to psycho criminals doing whatever the fuck they please, traffic laws be damned!

One such miscreant, The Nightrider (Vincent Gil) by name, goes on a rampage injuring police and causing major havoc. Enter “Mad” Max Rockatansky (Mel Gibson), number one law enforcement machine…  and exit the Nightrider in a rather large explosion.

This goes over like a fart in a submarine with Nightrider’s pals; the completely psychotic Toecutter (Hugh Keays-Byrne) who blows into town with his leather and armor clad gang of bastards, and begins setting up shop… much to the misfortune of the town’s residents.

As the violence increases and Max’s co-workers decrease exponentially, our hero decides that maybe he should walk away… but we all know damn well those evil motorcycle madmen ain’t going to let that happen. Revenge ensues.

Mad Max is, at it’s heart, a western taken to extremes… although as far as violence and tone are concerned, it’s more akin to it’s spaghetti counterparts than John Wayne’s Hollywood output… but the story structure is all there with it’s pack of wild desperados taking over a small town and a grim hero standing in their way. It’s a classic trope, told here to perfection… but Max is it’s own animal, that’s for sure!

One, the look of this film (and it’s direct sequel… but more on that in a bit), especially in terms of costume design, inspired legions of imitators that stretched from the post-apocalyptic film’s of early ’80s Italy, to Japanese manga and anime (there would be no Fist of the Northstar without Mad Max), and the amount of practical car and stunt work will have your jaw hitting the floor throughout… plus, this film is as beautiful as it is brutal.

Society has continued to collapse, and Max (a returning Gibson) now drives the wastelands with his dog, constantly in search of fuel… now societies most essential commodity.

Fortunately for Max, he stumbles across a batshit crazy gyrocopter pilot (played to manic perfection by Bruce Spence) who knows of a small society absolutely flush with fuel, which he leads our hero to in exchange for his life.

Once at the settlement, Max finds himself stuck between the headstrong Papagallo (Jared-Syn himself, Michael Preston) and his followers in the makeshift town, and the blood-crazed gang led by the hockey-masked mutant man-monster Lord Humungus (Kjell Nilsson in a suitably over-the-top performance replete with absolutely insane speeches), and his second in command Wez (Commando‘s Vernon Wells amping it up to 11)… but soon forges an alliance with the former with a resulting deal; Max retrieves a rig that can haul the gas tanker the fuck out of dodge and away from that lunatic Humungus, in exchange for all of the fuel he can carry… but then he leaves, none of that  “you have to drive the truck” bullshit…

Max drives the truck, absolute hell follows in that decision. There’s also a feral kid with a razor boomerang, because Australia.

This time things take on a more Yojimbo approach (though with the first film having those spaghetti western influences it’s all relative isn’t it… ) with our wandering hero strolling into town and offering a service to foil the “bandits” at hand… and what bandits they are!

While the first film’s miscreants we’re a rowdy bunch of lads indeed, the antagonists here take it to new heights with their mohawks and armor and super villain speeches. These lads were instant icons the moment they stepped on the sinister silver screen!

As before, the stunt and vehicle work on display is absolutely breathtaking, with huge car chases and bodies and cars being flung about with wild abandon… and you can feel it all as it’s all practically realized right before our eyes!

As absolutely stellar as the main event is, this disc contains the only bonus content on this release in the form of an audio commentary with series director George Miller, and a nearly hour long “making of” retrospective featurette.

Next we get 1985’s Mad Max goes Hollywood flick; Mad Max Beyond Thunderdome:

Beginning with a PG-13 rating and a Tina Turner theme song you can instantly tell you are going to be involved with a rather different ride than we got with the first two pictures in the franchise, and “different” isn’t always awesome…

After having his camel driven vehicle stolen by an air bandit (a returning Bruce Spence… but he’s not the autogyro pilot from the previous film… or maybe he is. who knows… ), Max (Gibson) finds himself in the vicinity of Bartertown, a large desert community ruled by Aunty Entity (the aforementioned Turner) that is the center of commerce in post-apocalyptic Australia.

Speaking of Entity, when she isn’t making a meal of the scenery, she asks for a little favor from our dude Max; namely he has to off the two man monster known as MasterBlaster (Angelo Rossitto and Paul Larsson) who are responsible for running Bartertown’s pig-shit methane producing power source Underworld… and are getting a bit too big for their collective britches.

How is he to do that you may ask? Why beating MasterBlaster in the absolutely bat-shit gladiatorial contest known as Thunderdome (it involves bungee cords and chainsaws… and has become a tried and true pop culture reference). Sounds awesome as all hell, right? Oh, it is, and so is a great deal that follows, but…

After finding himself back in the desert, Max is taken in by a group of oases dwelling Lost Boys (and girls) and becomes the children’s de facto holy figure… fuck we should be balls deep in car chase territory by now…

Anyway, waaaaay too much time is spent with these tykes and their collective whimsical bullshit (although to be fair, these young actors are damn solid, and the scenes with them are beautifully shot and present a dreamlike quality that nicely contrasts nearly everything we’ve seen in the series so far). At least there’s a great car chase…

Max (now played by Tom Hardy) is back, and after a series of misadventures finds himself the prisoner of the diseased, skull masked psycho Immortan Joe (Hugh Keays-Byrne, who you may or may not remember I mentioned played Toecutter all the way back in Mad Max) and his equally demented War Boys, one of which Max becomes a walking blood transfusion for.

Adding to Max’s troubles, he is caught between the vengeful wrath of Joe and his prized soldier, the cyborg-armed Imperator Furiosa (Charlize Theron) who has gone rogue, and taken Joe’s breeding wives with her to rescue them from their servitude and deliver them to a mythic green land while on supposed mission to retrieve gas from a nearby town.

This sets off a mammoth trek across the ruined earth with Joe and his cronies in hot pursuit of Max and Furiosa the entire way!

I can tell you one thing about ol’ Mad Max: Fury Road; it’s a full on fuckin’ masterpiece!

After the slight hiccup of (part of) the last film, director/co-writer George Miller is back in full-on ass kickin’ mode here let me tell ya, and while this is a big-budget studio picture, the violence and insanity are just as off the charts as when the series was in it’s low-budget days!

And, while this is a more modern film, and does utilize some CG wizardry, it’s used to enhance the film’s many, many action sequences, rather than completely dominate them, so expect some truly jaw-dropping vehicular combat and stunts, not to mention more bizarre vehicles than you’d see on Wacky freakin’ Racers!

All in all, there isn’t another cinematic series that has so much pulse-pounding action, vehicular mayhem, and (at times) raunchy sax music than the Mad Max franchise, and this 4K release showcases them in all of their hard drivin’, blacktop shreddin’ glory!