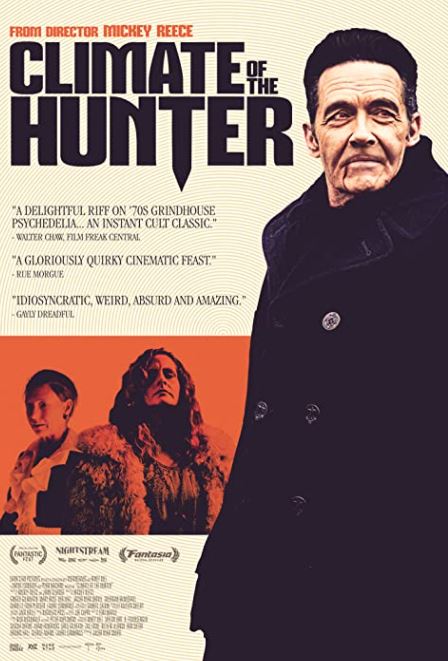 Over the course of many (bizarre ’70s era) meals (all announced in separate vignettes), the trio catch up… and we delve deeper and deeper into the triangle’s various psychoses while the atmosphere grows ever more like an extended fever dream where a normal relationship drama becomes something that grows completely into a psychotropic soap opera replete with a “love” triangle, strange offspring, and a whole mess of red wine.

Let me sum things up a bit early and announce: “Holy fuck did I love Climate of the Hunter!”

Set in a Neo-Romanticized Pseudo-Transylvania (all humble cabins sitting among leafless trees under slate grey skies) of sorts, director Mickey Reece (who also co-wrote the film along with John Selvidge) put a fiercely unique spin on the ol’ vampire biz… yup, that’s right; this is a fang bang jam at heart!

You see, it seems, and by “seems” I mean “it’s pretty fuckin’ likely” that Wesley is a vampire… he sleeps all day, is allergic to garlic, and is rumored to be incredibly long-lived… it goes on and on… and that fact puts a strain on the sister’s relationship in various and sundry… and often inexplicable ways. There’s also a character expertly named BJ Beavers (Jacob Ryan Snovel) who is either completely insane or the absolute voice of reason…

Sounds strange, right? You bet your arcane ass it is… and it’s also flat-out amazing on levels I can’t even begin to describe… like it’s a Lovecraftian monster, and I’m the madness-infected narrator attempting to describe it… it’s equal parts psychedelic, cosmic, and stagey… but also very concerned with horror tropes… it’s insanely heady stuff that I recommend your head be in the right place to enjoy properly. Also the tanned skin and beauty mark displayed by Mary Buss may be a reference to George Hamilton who played Dracula in the 1979 horror comedy Love at First Bite… it wouldn’t surprise me is all I’m sayin’…

Speaking of enjoyment… which we were before things took a turn for the tanning bed, Dark Star Pictures have included some choice bonus material on this Blu-ray release including a whole other feature film by Reece (the equally bizarre 2018 film Strike, Dear Mistress, and Cure His Heart which involves family drama, satanic shenanigans, and a hairy demon of some sort), followed by a short film/interview with Reece (which plays over clips of his old films amateur and otherwise), three deleted scenes, the film’s trailer, a recipe collection (naturally), and an image gallery.

Think of it this way; Climate of the Hunter is like Dark Shadows by way of Twin Peaks… with a dash of Murnau and more than a sprinkle of that ol’ grindhouse charm for shits n’ grins… and it’s absolutely fuckin’ brilliant!