Season 4 Of “What We Do In The Shadows” Coming Soon 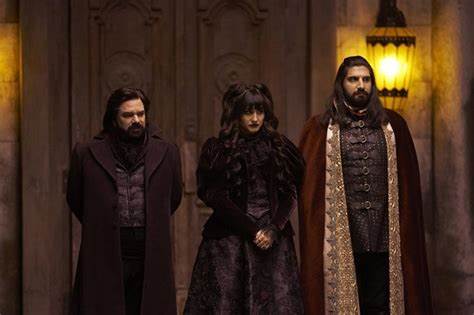 Fans of  FX’s “What We Do in the Shadows”  may be wondering when season four will be premiering, and what they can expect. We’ve got you covered.

FX ordered season four ahead of the finale of the third season. The good news is, season four has already been filmed and according to co-creator Jemaine Clement that its will be “on its way very soon.”

The vampire-comedy series follows the daily (or rather, nightly) lives of three vampires, who’ve lived together for over 100 years, on Staten Island and their familiar, Guillermo who has discovered that he his related to the legendary vampire hunter Abraham Van Helsing and it turns out, Guillermo is really good at it.

Matt Berry, Kayvan Novak, Harvey Guillén, Natasia Demetriou, and Mark Proksch star in “What We Do in the Shadows,” based on Jemaine Clement and Taika Waititi‘s 2014 film.

Jemaine Clement shared the news on Twitter and reminded a fan that he is no longer involved in writing “What We Do In the Shadows.” He wrote for the series the first two seasons. And left to write, direct, and star in other projects, including the upcoming spin-off of the original What We Do in the Shadows, We’re Wolves. He will also be starring in the upcoming Avatar franchise films.

I am not working on WWDITS anymore but S4 of that has also been shot and is on its way very soon too. https://t.co/TEvZAWoDN4

The exact date has not been announced at this point, but knowing that it has already been filmed gives us the impression that it will be arriving very soon. Catch up or re-watch the first three seasons of “What We Do in the Shadows” now on Hulu as well as the spin-off series “Wellington Paranormal“, whose fourth season is also coming soon.

Here’s a look back at the season three trailer for “What We Do in the Shadows.”