Directed by Cody Calahan (Antisocial, The Oak Room), and written by James Villeneuve (The Ticket), Vicious Fun centers on Joel, a caustic film critic for a national horror magazine who unwittingly finds himself trapped in a self-help group for serial killers. With no other choice, he attempts to blend in with his homicidal surroundings or risk becoming the next victim. 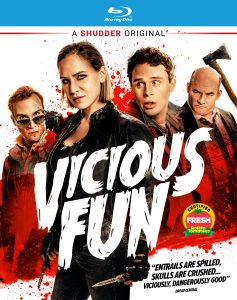