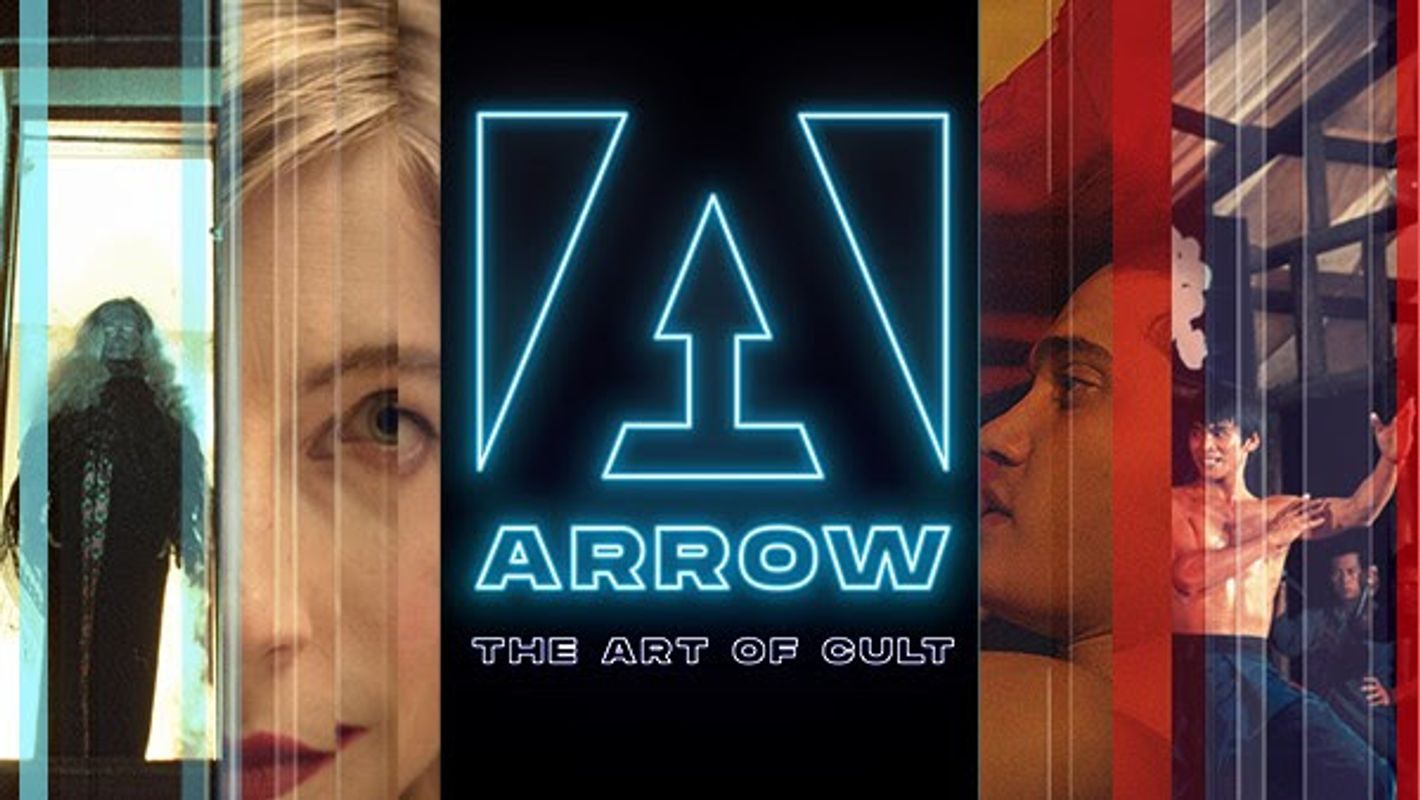 The April 2022 lineup leads with the ARROW release of dystopian surrealist Chema Garcia Ibarra’s feature The Sacred Spirit, available to subscribers in the US, UK, Canada and Ireland. The film will debut on ARROW April 15.

Poliziotteschi: Featuring hard-hitting, white hot lead-filled, pedal-to-the-metal movies straight out of a 70s Italy that was bitterly and dangerously divided along political and social lines, all of the films in the Poliziotteschi Collection offer a fascinating insight into a highly specific time and place where corruption and class informed the filmmakers choices in these often morally dubious action-packed thrillers.

Brutal criminals and super-cool cops collide in knuckle-breaking car chases featuring gorgeous retro automobiles flung through traffic at insanely dangerous speeds, and gritty violence doled out by anything from a Colt .38 to a fork lift truck! Featuring the work of extremely brave stunt men literally risking it all for some truly death-defying moments, in these Italian crime thrillers, or crimi, you hold on tight and you take justice any way you can get it.
Titles include: The Heroin Busters, Savage Three, Colt 38, The Kidnap Syndicate.
Adrenaline: The Di Leo Collection Titles include: Shoot First Die Later, Kidnap Syndicate, Naked Violence.

We know that when it comes to Vinegar Syndrome movies, just like us, you cannot get enough – so, hot on the heels of Vol. I and II, comes a third collection of the weirdest, wildest and just plain raddest titles rescued from celluloid obscurity by a bunch of brilliant boutique cult film preservers: VINEGAR SYNDROME COLLECTION: VOL. III.

ARROW favorite José Larraz (Edge of the Axe, Deadly Manor) directs the wonderfully trashy and gory Rest in Pieces; The Passing is a sci-fi body-swapping examination of love, loneliness and the fear of dying; and The Battle for the Lost Planet and Mutant War are to be taken together and feature a thief out of time facing down alien mutants.

You’ve seen our presentations of Beyond the Door and Beyond the Door 2 (a.k.a. Shock), now prepare yourself for Beyond the Door 3 – a possession slasher sequel that goes the Under Siege 2 route by taking place… on a train! For those who love nunsploitation – all of us then – there’s Malabimba, and if it’s Rambo vs. bikers you’re after then get a load of Savage Dawn.

April 5th debuts Lau Kar-leung’s martial arts epic The 8 Diagram Pole Fighter (US/CA). Loosely based upon the legendary Yang dynasty chronicled in Chinese folklore, the film starts as the family patriarch and all but two of his sons are brutally wiped out in a bloody battle. One surviving son (Fu Sheng) returns to his mother and two sisters, deeply traumatized; the other (Gordon Liu) escapes and joins a nearby monastery while in hiding. Once he learns his sister (Kara Hui) has been captured by their enemies, however, the warrior-turned-monk realizes he must renounce his peaceful ideals in order to mount a rescue mission and avenge his family.

On April 11th, enjoy a trio of North American exclusives with The Pit (US/CA), Inferno (US/CA), and The Bird with the Crystal Plumage (US/CA).

April 14th will see the bow of Sinful Nuns of Saint Valentine (UK/US/CA/IRE). Lucita has been locked away in a convent by her family in order to keep her away from her lover, Esteban. The pair make plans to elope, but Esteban is accused of heresy before Lucita can escape. Hiding in the convent, Esteban discovers the horrifying depravity of the convent’s abbess, Sister Incarnation. Can Esteban rescue his love from this madhouse before the inquisitor discovers what is going on and has everyone executed?

On April 18th, experience John McNaughton’s acclaimed classic Henry: Portrait of a Serial Killer (UK/US/CA/IRE). Widely heralded as one of the greatest serial killer movies of all time, Henry: Portrait of a Serial Killer presents a bleak and unflinching dive into the mind of a mass murderer. Recently released from prison, the nomadic Henry (Michael Rooker, Guardians of the Galaxy, “The Walking Dead”) finds temporary abode in the rundown Chicago lodgings of a former jail acquaintance and small-time drug dealer, Otis (Tom Towles). Hiding behind his unremarkable employment as a pest exterminator, Henry leads a double life, prowling the streets by night on a brutal and apparently motiveless killing spree. Based on the horrific true-life crimes of Henry Lee Lucas, the harrowing controversial debut feature from John McNaughton (Mad Dog and Glory, Wild Things) comes to ARROW in a new 4K restoration supervised by the director himself.

Go deep into the minds of murderers with April 18’s Season: Portraits of Serial Killers (UK/US/CA/IRE).
Titles include: A Serial Killer’s Guide to Life, The Stylist, Henry Portrait of a Serial Killer.

José Manuel and the other members of the ufology association Ovni-Levante meet weekly to exchange information about extraterrestrial messages and abductions. Julio, their leader, dies unexpectedly, leaving José Manuel as the only person who knows about the cosmic secret that could alter the human future. Meanwhile in Spain a search is going on for a little girl who disappeared some weeks before.

What starts out as a kooky comedy about a seemingly-harmless group of eccentric UFO spotters then takes a truly unexpected turn into much darker material. It’s a truly unique, powerful and extraordinarily moving film that you can see first on ARROW.

For five decades, Claude Chabrol navigated the unpredictable waters of Cinema, leaving in his wake more than fifty feature films that remain among the most quietly devastating genre movies ever made. Sardonic, provocative, unsettling, Chabrol’s films cut to the quick with a clarity and honesty honed to razor sharpness.
The Swindle (Rien Ne Va Plus) sees Chabrol at perhaps his most playful as a pair of scam artists, Isabelle Huppert and Michel Serrault, get in over their heads. But who is scamming who and who do you trust in a life built on so many lies? The murder of a 10 year old girl sparks rumours and gossip in The Color of Lies (Au Coeur Du Mensonge), as suspicion falls on René (Jacques Gamblin) the dour once famous painter, now art teacher, who was the last person to see her alive. Enigmatic, perverse, seductive, Isabelle Huppert encapsulates everything that makes Nightcap (Merci Pour Le Chocolat) a film John Waters calls “Cinematic Perfection” in this tale of suppressed family secrets. Finally, in The Flower of Evil (La Fleur Du Mal), incest, old money and intergenerational guilt come under the scalpel as an outwardly perfect bourgeois family begins to unravel when the wife involves herself in politics.

Though influenced by Fritz Lang, Alfred Hitchcock and Jean Renoir, Chabrol’s voice was entirely and assuredly his own, influencing in turn filmmakers like Bong Joon-ho, James Gray and Dominik Moll. His amused, unblinkered view of life and refusal to judge his characters makes his films timelessly relevant and accessible to all.

ARROW is available in the US, Canada, the UK and Ireland for $4.99 monthly or $49.99 a year on Roku (all Roku sticks, boxes, devices, etc), Apple TV & iOS devices, Samsung TVs, Android TV and mobile devices, Fire TV (all Amazon Fire TV Sticks, boxes, etc), and on https://www.arrow-player.com.

ARROW Essentials curates collections based on genre, decades and themes; and ARROW Stories takes a fresh look at the world of film and TV with exclusive documentaries, interviews and video essays diving deeper into the many curated seasons and titles on the platform for a richer and deeper viewing experience.

In the coming months, ARROW will be adding Oscar-winning hits, European classics, Asian cinema masterworks, rediscovered Westerns, offbeat gems and much more as part of ARROW’s international strategy to support and celebrate the medium of film.

ARROW is also home to ARROW Stories – an ever-growing collection of interviews, trailers, documentaries and additional extras, both newly created exclusives for the service and from the company’s extensive archives. The service will be updated regularly with fresh content, new curation focuses and never-before-seen content, all selected by the ARROW team as well as the filmmakers themselves. With a slickly designed and user-friendly interface ARROW is the new alternative place to go for the very best in On-Demand entertainment. 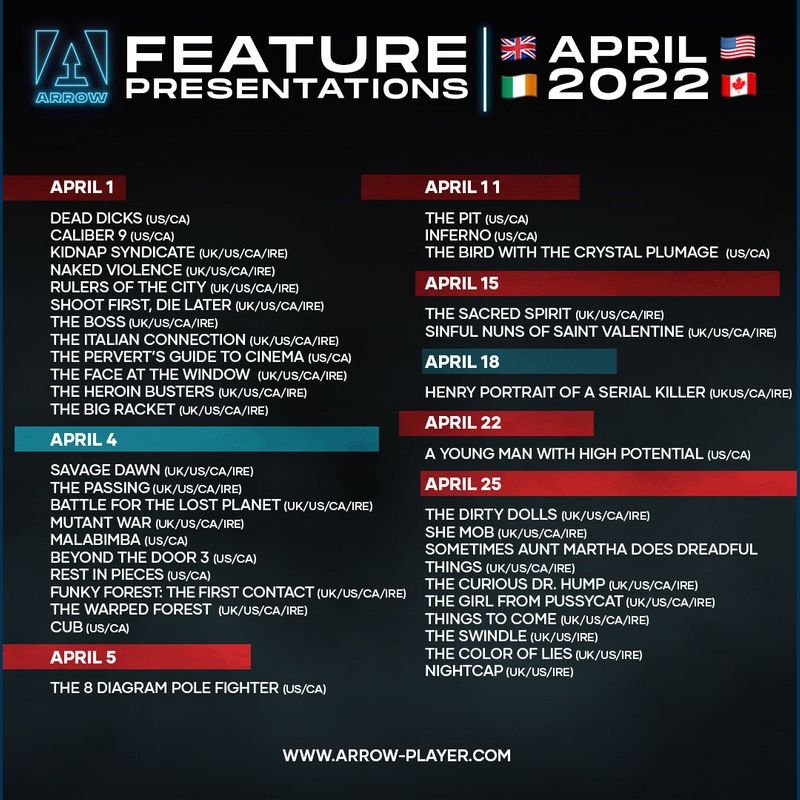