The Puppet Master Franchise & More Streaming On Arrow This May 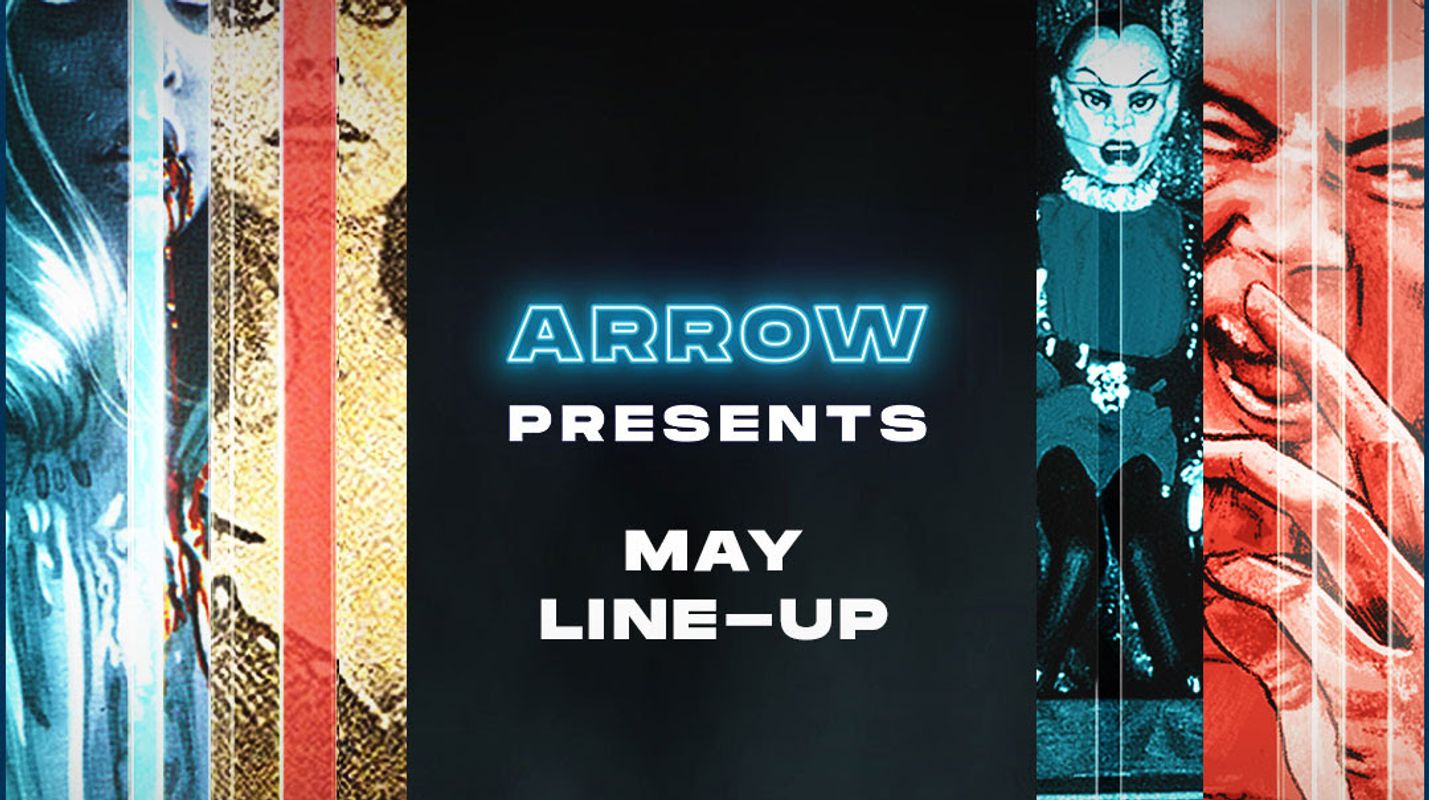 Arrow Video has just announced its killer May 2022 lineup for their new subscription-based ARROW platform, available to subscribers in the US, Canada, the UK, and Ireland.

The May 2022 lineup leads with the ARROW release of Charles Band’s B-movie flagship Puppet Master franchise, available to subscribers in the US, UK, Canada, and Ireland. The original classic will debut on ARROW May 1, with selected sequels joining the service throughout the month.

The behemoth that is the Puppet Master franchise hits ARROW, ready to make you make very sure that any toy boxes are securely locked before you go to bed. The flagship series of B-movie mogul Charles Band’s horror, sci-fi, and fantasy studio, Full Moon Pictures, the first Puppet Master became a video rental store legend in 1989 and the franchise continues unleashing new terrors to this very day.

Settle in for our enormous feast of murderous marionette movies featuring a brilliant cast of killer puppets offing their victims in fun and imaginative ways. With new toys and expansions and explanations of the lore constantly keeping the series fresh and exciting, ARROW’s Puppet Master Collection rollout will keep you laughing and gasping for literally days. 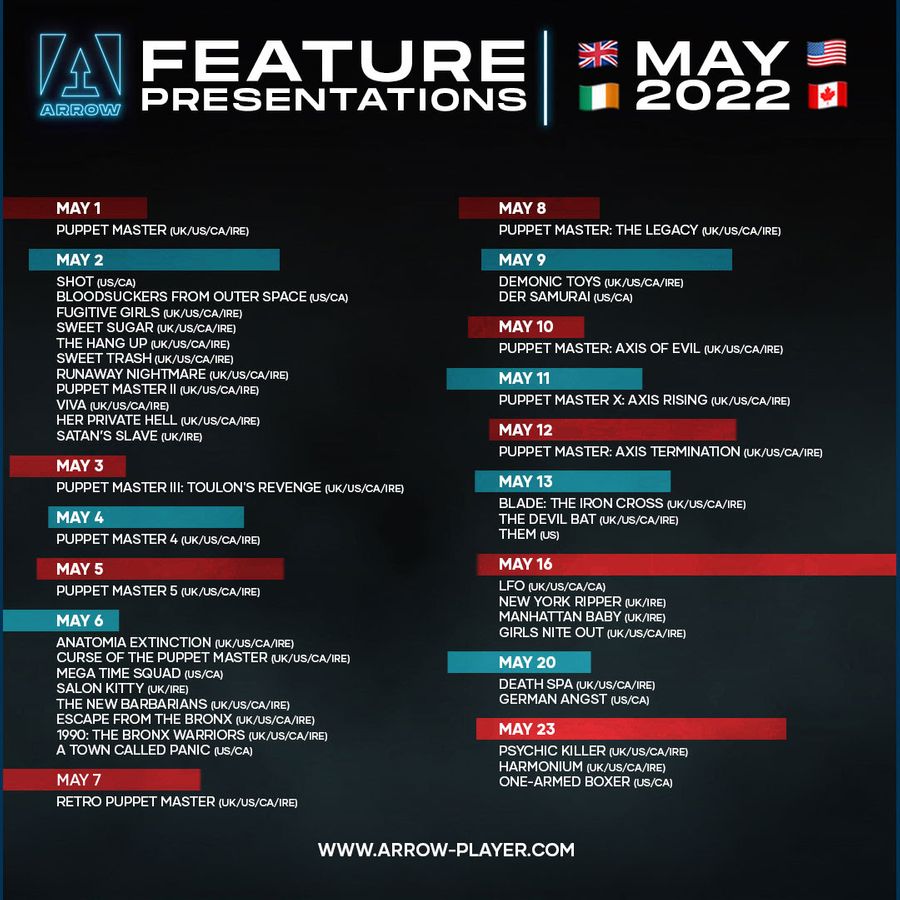 May 1st starts the month with Puppet Master, the 1989 classic that kicked off a legendary b-movie franchise (UK/US/CA/IRE).
May 2nd begins this month’s Seasons with the fourth and craziest (so far) collection from Vinegar Syndrome. Vinegar Syndrome Collection Volume IV includes cult craziness and sleazy zaniness that ARROW subscribers deserve. Available in the US, UK, Canada, and Ireland, fans can soon enjoy Fugitive Girls – the gleefully pervy prisonsploitation penned by Ed Wood himself; the deliciously debauched nightmare Sweet Trash; there’s also Sweet Sugar – the story of a nymphomaniac entrapped and forced onto a sugar cane chain gang; The Hang Up – a tale of an LA vice cop having a forbidden affair with a prostitute; and Runaway Nightmare, which features worm farmers being kidnapped by a gang of female gun-runners and used as sex slaves.
Titles include Runaway Nightmare, Sweet Sugar, Fugitive Girls, and The Hang Up.
May 2nd blooms big with several new releases: Puppet Master II (UK/US/CA/IRE), Shot (US/CA), Bloodsuckers from Outer Space (US/CA), Fugitive Girls (UK/US/CA/IRE), Sweet Sugar (UK/US/CA/IRE), The Hang Up (UK/US/CA/IRE), Sweet Trash (UK/US/CA/IRE), Runaway Nightmare (UK/US/CA/IRE), Viva (UK/US/CA/IRE), Her Private Hell (UK/US/CA/IRE).
The first week of May brings more murderous toys with Puppet Master III: Toulon’s Revenge on May 3, Puppet Master 4 on May 4, and on May 5, the slightly inaccurately named Puppet Master 5: The Final Chapter.
May 6th shines with a Season that curates a triptych of post-apocalyptic science-fiction action movies: The Bronx Warriors Trilogy (UK/US/CA/IRE). Full of influences from the likes of John Carpenter, Walter Hill, and Sergio Leone, and elements of everything from Mad Max 2, Escape From New York, and The Warriors, these three films (1990: The Bronx Warriors, The New Barbarians, Escape from the Bronx) will absolutely thrill genre and exploitation fans.
The Bronx Warriors Trilogy includes: The New Barbarians, Escape from the Bronx, 1990: The Bronx Warriors.
As the weather warms up, so does ARROW. On May 6, close the blinds with Sangre y sexo: The Films of José Larraz (UK/US/CA/IRE). Blood and sex. Audiences love it and the works of cult Spanish genre filmmaker José Ramón Larraz are dripping in it.
Collecting together some of Larraz’s best films, Sangre y Sexo provides a perfect cross-section of Larraz’s work – from the higher-brow but still full of skin and slayings.
Titles include Deadly Manor, Whirlpool, Edge of the Axe, and The Coming of Sun.
Other new ARROW titles on May 6th include Anatomia Extinction (UK/US/CA/IRE), Curse of the Puppet Master (UK/US/CA/IRE), Mega Time Squad (US/CA), A Town Called Panic (US/CA).
The rollout of murderous marionettes continues on May 7th with the origin story Retro Puppet Master (UK/US/CA/IRE) and Puppet Master: The Legacy (UK/US/CA/IRE) on May 8. Head back to World War II for a three-night ARROW Event to see how the indestructible Toulon puppets held the key to the fate of the free world: Puppet Master: Axis of Evil (UK/US/CA/IRE) beginning May 10, Puppet Master X: Axis Rising (UK/US/CA/IRE) beginning May 11th and concluding with Puppet Master: Axis Termination (UK/US/CA/IRE) on May 12.
For those who haven’t had enough of killer playthings, May 9th will also see the release of Demonic Toys (UK/US/CA/IRE). North American subscribers will get a killer cleanser with Der Samurai (US/CA), a German mindbender about repressed sexual desires, bloody decapitations, and small-town life.
May 11th pays homage to ARROW’s native shores with Britsploitation: The Norman J. Warren collection (UK/US/CA/IRE). English sexploitation film director Norman J. Warren took the 70s by storm, shaking up the traditional-until-then idea of what British horror was and could be with a sharp increase in the saucy sexual and grimace-inducing gore quotients, as well as utilizing modern settings and younger casts than the UK’s traditional horror merchants: Hammer and Amicus.
Available in all territories are Her Private Hell, Satan’s Slave, and Bloody New Year. Her Private Hell is an example of the softcore sex films Warren began his career making in the 60s. While it does hold the title of the first British narrative sex film, Warren did not enjoy making that kind of movie – even stating that he did think the British were capable of making anything truly sexy because of our inherent Britishness! – and also did not want to be pigeon-holed, so for his benefit, and most definitely also for film fans’, he pivoted into horror.
Titles include Her Private Hell, Satan’s Slave, and Bloody New Year.

May 13th offers a trio of dark and deranged titles: Blade: The Iron Cross (UK/US/CA/IRE): Dr. Hauser, the Third Reich’s maddest scientist, rises again with murder and mayhem on his mind; The Devil Bat (UK/US/CA/IRE): Bela Lugosi stars as a scientist who commands a mutant bat to avenge himself upon his enemies using a specially formulated after-shave lotion as the targeting device; Them (US): A young couple leads a happy, quiet life in the countryside. But little do they know they’re being surrounded. When night falls, the couple will come face to face with Them.

On May 16, it’s time for Girls Nite Out (UK/US/CA/IRE). A host of familiar genre faces including Hal Holbrook (Creepshow), Rutanya Alda (Amityville II: The Possession), Julia Montgomery (The Kindred), and Lauren-Marie Taylor (Friday the 13th Part 2) rounds out the cast of this gloriously mean-spirited slice from the slasher golden age. Girls Nite Out is a decidedly singular slasher flick that comes on like a frenetic cross between Animal House and Friday the 13th – veering from jovial frat antics to jarringly disturbing scenes of the killer shrieking obscenities as he slices up his victims. On this nite out, no one is coming home!
Also on May 16: LFO (UK/US/CA/IRE), a darkly comic sci-fi thriller that follows an amateur scientist who hypnotizes his neighbors, subjecting them to increasingly outlandish scenarios to fuel his megalomania.

May 20th brings us to our final Season, a tribute to Italian spaghetti western maestro Enzo Castellari: Inglorious Enzo: The Castellari Collection (UK/US/CA/IRE), a man who used his talents across many genres loved at ARROW. Castellari made the Giallo thriller Cold Eyes of Fear – which sees a playboy take a pretty girl home only to find a pair of angry convicts thirsting for vengeance waiting for him; the western Keoma starring the blue-eyed King of Cool: Franco Nero; the action-packed Italian crime thriller poliziotteschi The Big Racket and The Heroin Busters; and The Bronx Warriors Trilogy: a trio of futuristic action pictures set in a post-apocalyptic future.
Titles include The Big Racket, The Heroin Busters, and Escape From the Bronx.

Also on May 20, luxuriate with Death Spa (UK/US/CA/IRE) and enjoy German Angst (US/CA) an anthology featuring three stories – all of which focus on the dark, violent, and disturbing nature of love and sex.

May 23rd wraps up the month not with flowers, but with death, betrayals, and destruction. Psychic Killer (UK/US/CA/IRE): Jim Hutton stars as Arnold Masters, a harmless recluse committed to a mental hospital for a murder he didn’t commit. When his elderly mother dies from criminal neglect during his incarceration, Arnold develops psychic abilities to become an out-of-body killer exacting his revenge.

Harmonium (UK/US/CA/IRE): Toshio (Kanji Furutachi) sees his ordinary life take an ominous turn when Yasaka (Tadanobu Asano), a friend from his past, arrives unexpectedly. Recently released from prison and in need of a helping hand, Toshio gives him a job and generously takes him in to live with his wife and daughter. Yasaka gradually disrupts the family before finally causing irreparable damage. Koji Fukada’s acclaimed companion piece to his black comedy Hospitalite treads darker waters as it unravels a searing tragedy that has captivated critics and audiences alike since it won the Un Certain Regard Jury Prize at the Cannes Film Festival.
From the legendary star of One-Armed Swordsman and The Chinese Boxer comes… One-Armed Boxer (US/CA)! Yu Tian Long (Wang) is the best fighter to come out of his local martial arts school, but when he crosses the ruthless leader of a local crime syndicate, the big boss’ brutal bevy of deadly killers makes mincemeat out of the school and everyone inside. Now the only survivor of the massacre, and short one appendage, Yu is gifted a powerful elixir that promises to give him the strength to take swift revenge on the army of assassins, each representing the most lethal forms of fighting from across the Eastern hemisphere. One-Armed Boxer proves once and for all that you only need five fingers of death to get the job done.

Head over to ARROW to start watching now. Subscriptions are available for $4.99 monthly or $49.99 yearly.

← Prev: A Psychic And A Serial Killer Are Caught In A Game Of Cat And Mouse In 'Night Caller' (Trailer) Next: Star Fired From Netflix's "The Fall Of The House of Usher" Following Allegations Of Misconduct →