After making a splash at theaters, writer-director Ti West‘s sexy new horror film, X, which has a killer soundtrack, is out now from A24 (review)!

In the film, set in 1979, “a group of young filmmakers set out to make an adult film in rural Texas, but when their reclusive, elderly hosts catch them in the act, the cast soon finds themselves in a desperate fight for their lives.”

X, whose opening scene you can watch here, is now out on Digital and Blu-ray from A24. As a bonus, you’ll recieve a limited edition art print that was a collaboration with director Ti West (below). 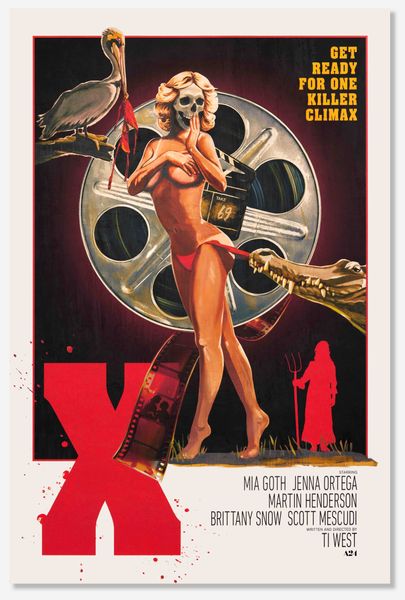 ← Prev: Audience Walks Out During Cannes Screening Of Cronenberg's 'Crimes Of The Future' Next: John Carpenter The First Guest On New "Full Moon Freakshow" Podcast (Watch) →