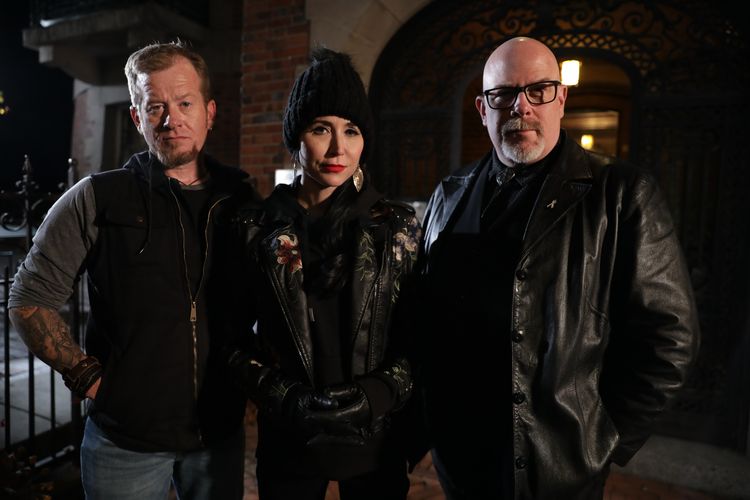 An elite team of paranormal investigators race to help a western town in the new series “Ghosts of Devil’s Perch,” premiering this August on Travel Channel and Discovery+.

“A mystery is buried beneath the streets of Butte, Montana, and the spirits tethered to the historic mining town’s past are rising to the surface with clues. The discovery of copper in the 1880s turned Butte’s Copper Barons into some of the wealthiest men in America. But the hills that glittered in the sun could also cast sinister shadows of greed and vice at night. This led some to brand the mountain town “The Devil’s Perch.” With the town now intent on rebuilding its image, it seems every renovation project is digging up a paranormal nightmare with residents and businesses reporting terrifying ghostly encounters. In an unlikely partnership, Mayor J.P. Gallagher and Sheriff Ed Lester have called in an elite team of paranormal investigators to help. When investigator Dave Schrader, tech expert K.D. Stafford and psychic medium Cindy Kaza arrive in Butte, they find paranormal activity that startles even them.

The all-new Travel Channel series, “Ghosts of Devil’s Perch,” premieres on Sunday, August 21 at 9 p.m. ET/PT with the same-day release on discovery+.

“The team unearths disturbances ranging from feuds between rival mine owners to lovers resorting to violence to vice-fueled horrors lurking in the town’s past. As the disturbing cases begin to form a pattern, the team discovers an army of trapped spirits crying for help, and they refocus their efforts on finding who or what is causing so much anguish. Resorting to threats and violence, the dark entity beneath Butte goes on the attack. The spiritual awakening is in full force and quickly forces the team to question if they’ll make it out of Devil’s Perch unharmed.”

“Towns around the nation frequently approach us, desperate to resolve lingering, unexplained disturbances and lay them to rest. When we heard about the disturbances in the small town of Butte, we knew they needed an elite team of paranormal investigators. We immediately reached out to our expert trio, Dave, Cindy and K.D., to confront whatever forces reside there. In ‘Ghosts of Devil’s Perch,’ we explore its rich history to unlock the town’s fear. Along the way, we lay witness to a few surprises,” said Matthew Butler, group senior vice president, Travel Channel and Paranormal Streaming Content.

Will the town continue to be haunted by spirits of the past or will it finally break free? Find out by tuning in on August 21, 2022 at 9pm ET/PT for the first episode, “Blood Feud. ”

Dave Schrader, Cindy Kaza and K.D. Stafford arrive in Butte, Montana, to root out an evil presence threatening the entire town. As soon as they arrive, the team answers a call for help at a Gilded Age mansion and find themselves caught in the throes of a paranormal blood feud.

Dave Schrader, Cindy Kaza and K.D. Stafford investigate a terrifying encounter with an entity in the Cabbage Patch, a former shanty town with a sordid past. The haunting hits close to home when one of the team is viciously attacked by an unseen force and rushed to the hospital.

“Monster in the Mine”

Dave Schrader, Cindy Kaza and K.D. Stafford rush to an opulent stone mansion after two witnesses report an encounter with a ghostly intruder. The team is threatened by spirit voices as they uncover a history of murder and madness. But what lies beneath the home is even more troubling.

A terrified couple calls Cindy Kaza, Dave Schrader and K.D. Stafford to their home after the wife wakes to a dark figure choking her. The team’s investigation reveals that this unassuming house on a quiet residential street may hold the key to what is haunting Butte and why.

Butte’s Dumas Brothel is famous for its ghosts, but the hauntings have now turned aggressive. To find answers, Dave Schrader, Cindy Kaza and K.D. Stafford contact two female spirits who once worked there. Are they behind the recent attacks? Or has a dark entity moved in?

“I’m Coming for You”

A family is plagued by poltergeist activity and a menacing shadow figure who visits their small son. Dave Schrader, Cindy Kaza and K.D. Stafford wonder if this house, located on the site of a former racetrack, could be connected to the vices of old and the darker side of Butte.

Dave Schrader, Cindy Kaza and K.D. Stafford are called to Butte’s historic courthouse after a woman has a strange encounter with an apparition. When they uncover a history of brutal public executions, the team fears one of the spirits roaming the halls is out for blood.

Dave Schrader, Cindy Kaza and K.D. Stafford have identified the dark entity behind the trouble in Butte. Now they must confront this “monster” hundreds of feet below the ground in what could prove to be the most harrowing paranormal battle of their lives.

“Ghosts of Devil’s Perch” is produced by MAK Pictures, LLC for Travel Channel and discovery+.

Cindy Kaza is a psychic medium who had her first memorable encounter with a spirit when she was just 10 years old. She dismissed this chilling experience as just a dream until her early 20s, when she realized she was continually having psychically spiritual experiences. Since this “awakening,” Kaza has been searching for the truth about her gifts and testing the limits of her multifaceted abilities, including “automatic writing,” in which she allows the dead to communicate directly through her via free-form writing. Kaza has trained at England’s renowned Arthur Findlay School of Intuitive Sciences and now travels across America providing people startling evidence and messages from the dead.

Dave Schrader is an experienced paranormal investigator and host of the popular paranormal podcast, The Paranormal 60 with Dave Schrader. From an early age, Schrader has been surrounded by the strange and anomalous, from haunted homes to creature sightings, UFO encounters and more. Schrader invites you along on his journey and thanks you for taking him along on yours. Never a casual observer, Schrader pushes claims of the paranormal to the limits by investigating them himself and visiting some of the most active and haunted locations in the world, just like his paranormal inspiration, Dr. Hans Holzer. Schrader is also the co-author of the book “The Other Side” and has been featured on several hit paranormal television series, including “Ghost Adventures,” “Paranormal Challenge,” “Paranormal State,” “Fright Club” and “Haunted Hospitals” as well as the lead investigator on “The Holzer Files” and on the Shock Doc, “The Curse of Lizzie Borden”.

K.D. Stafford is known as the “paranormal mad scientist.” Stafford uses advances in technology to build better paranormal research equipment that pushes the envelope. He has built ghost helmets that allow everyday people to heighten their sixth sense and also built advanced scrying mirrors that use LED lights to see spirits and the most advanced ghost boxes on the market. Stafford is a U.S. Army veteran with nearly eight years in service as a combat equipment technician and noncommissioned officer. In the army, he was exposed to maintaining mechanical and electronic systems in high-tech combat vehicles, and he found an interest in electronics and microcomputers. Stafford’s passion for the paranormal began in his early childhood. He has always loved investigating and studying unusual occurrences. Stafford is now on a mission to use technology to find answers to the spooky and unexplained.