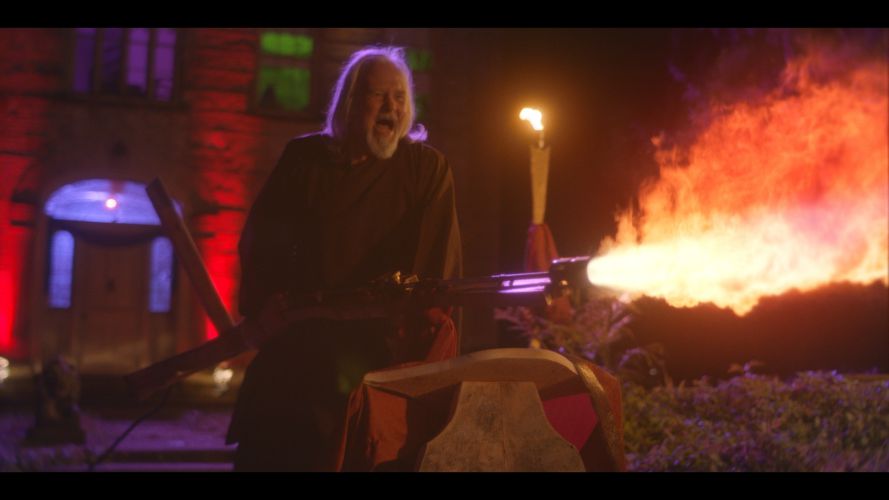 Canadian horror comedy Cult Hero finds disgraced cult deprogrammer, reality television star, and self-described “cult buster” Dale Domazar (Ry Barrett of The Chamber of Terror) living off the grid a few years after an episode of his series featured him leading to the suicide of several cult members. It’s hard to tell whether his mannerisms are an affectation based on his favorite action heroes of yore or if he really lives his schtick.  When high-strung, ill-mannered real estate agent Kallie (Liv Collins of Creep Nation) begins to suspect that the male retreat at which she dropped off her beta-male husband Brad (Justin Bott) may actually be a suicide cult, she contacts Domazar, who sees the paid gig as his potential comeback for a second series of his Cult Buster program. Director Jesse Thomas Cook, whose previous works include Monster Ball, The Hexecutioners, and The Hoard, delivers a fun, goofy feature that delivers plenty of laughs along with some action and impressive gore effects. Collins steals the show with her high-energy portrayal of a Type-A personality, and Barrett makes for a goofy character that parodies the aforementioned action-hero style. Cult Hero won’t win any awards for high satire or intellectual humor, but that’s not what it is going for. If you’re in the mood for some dumb fun, the film delivers guffaws and grue aplenty. 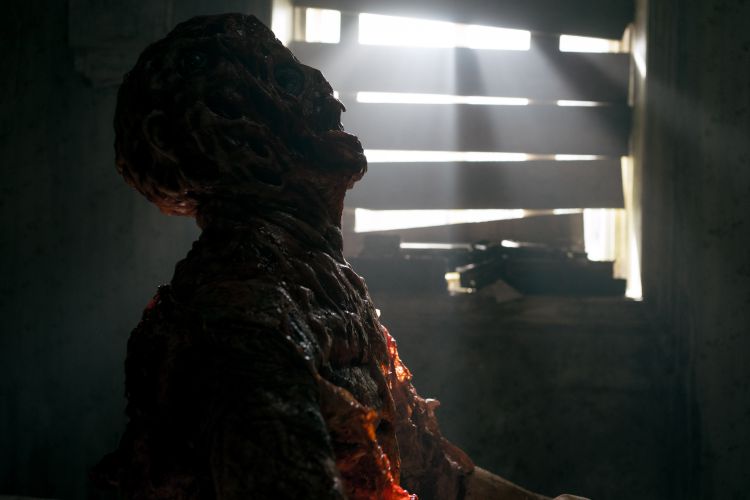 Science fiction/horror feature The Breach, the latest from director Rodrigo Gudiño (The Last Will and Testament of Rosalind Leigh and the founding editor and publisher of Rue Morgue magazine), is a wild ride that features some solid performances, great-looking practical effects, and an intriguing story. Lone Crow Chief of Police John Hawkins (Allan Hawco, The Child Remains) is on his last few days before moving to a new job in the city. As horror movie luck would have it, he gets involved in a case that starts with a mangled body floating in a canoe and takes him to a house so remote that he has to have river guide and ex-girlfriend Meg (Emily Alatalo, Spare Parts) take him there, with local coroner and Meg’s boyfriend before him Jake (Wesley French) in tow. The triangle of former lovers makes for some nice dramatic tension as they try to figure out what happened with the house’s previous renter, theoretical physicist Cole Parsons (Adam Kenneth Wilson, Alien Mysteries), who had a young daughter go missing in the past. The cast members all give engaging turns, including Natalie Brown (Dawn of the Dead) as Parson’s equally confused wife Linda and Mary Antonini as Deputy Parks. Former Rush guitarist Alex Lifeson checks in with cameos as a conspiracy theorist, and to further the film’s rock music credentials, Slash of Guns N’ Roses provides an intriguing score. This Canadian chiller swings for the fences as it mashes up science with the supernatural, providing plenty of suspense and mystery before delivering its grue-filled third act. Some of the elements may be familiar to fright-fare enthusiasts, but Gudiño, working from a screenplay by Ian Weir based on Nick Cutter’s source audio novel, provides plenty to enjoy.

Cult Hero and The Breach screen as part of Fantasia, which takes place in Montreal from July 14–August 3, 2022. For more information, visit https://fantasiafestival.com/en/.

← Prev: The 'Spirit Of Halloween' Trailer Is Crawling With Monsters! Next: Indie Horror 'Bloody Man' Getting a Special Edition Blu-ray →