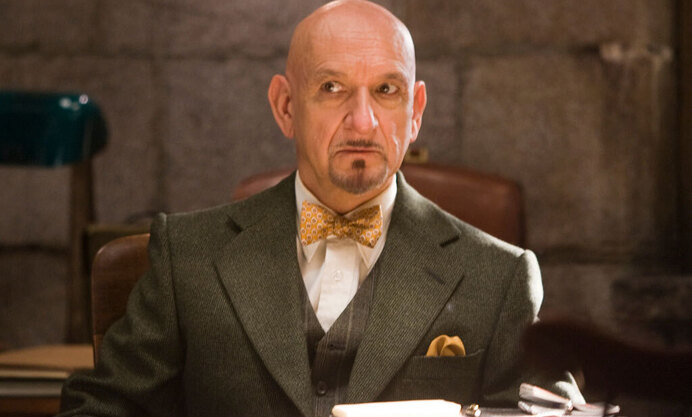 35 years after publishing Neil Gaiman and Dave McKean’s first-ever graphic novel, today Scary Monster, Lakesville Productions and Foton Pictures have now announced that development on Violent Cases is well underway with Academy Award®-winning actor Ben Kingsley attached in the lead role of the Osteopath led by the creative team behind the BAFTA-nominated The Girl With All The Gifts, director Colm McCarthy, writer Mike Carey, and producer Camille Gatin.

At only 50 pages, “Violent Cases” features a narrator, who tells of how, as a small child in Portsmouth, he was taken by his father to be treated by an osteopath ( a licensed physician who uses both conventional treatments and osteopathic manipulative medicine) who was once employed by Al Capone. The nature of the narrator’s relationship with his father, the tales the osteopath told, and the disturbing events that followed, are partially obscured by the narrator’s imperfect recall of things he was not old enough to understand at the time.

Violent Cases was created by Neil Gaiman (Good Omens, The Sandman, Coraline, Lucifer, American Gods, Doctor Who) and Dave McKean (Luna, Mirror Mask). The graphic novel’s original publisher Mike Lake reached out to Neil to turn it into a feature film and recommended writer Mike Carey, who had previously written “Lucifer” and many other books in the “Sandman” universe. Neil wholeheartedly agreed with the choice.

Violent Cases is a journey into the mind of Neil Gaiman, as a famous author recounts fragmented childhood memories and visits to an osteopath who once worked for Al Capone, weaving a dark and twisting tale about stories, our memory, violence, and the ways we can’t escape our past.

Directed by Colm McCarthy (The Girl With All The Gifts, The Bastard Son & The Devil Himself, Peaky Blinders), the film will be produced by Lakesville Productions’ Edmund Kingsley, Scary Monster’s Camille Gatin and Colm McCarthy and Foton.Pictures’ Carlos Enrique Cuscó and Ari Taboada.

Kinsley took home an Oscar for his role in Gandhi, which also won him a BAFTA Award. He has had many nominations for both awards since. He is best known for his roles in Gandhi, Sexy Beast, Schindler’s List, and Iron Man 3.

“I’m delighted to be working with this fantastic team on Violent Cases, which for me is about the power and importance of storytelling, about how we negotiate the shadows cast by the father figures in our lives and above all about the right of our inner child to be heard.” Lead actor Ben Kingsley said.

“Violent Cases is a wild, hallucinatory, yet thought provoking and emotional comic. It’s so exciting to build a film from this incredible, genre-defining work.” Director Colm McCarthy said.

“As an aspiring writer back in the late 80s reading Violent Cases was a revelation and a joy for me. Its darkness and playfulness defined a new approach to storytelling. Thirty-five years on, it’s still unique, and bringing it across into a new medium feels like discovering it again for the first time. Neil Gaiman redefined serialized comics with The Sandman, but Violent Cases was his and Dave McKean’s early masterpiece. It’s thrilling to be introducing it to a new audience, and taking its visual lyricism into a new medium.” Writer Mike Carey has said.

We’ll keep you posted as more casting news comes. In the meantime, I recommend checking out the other adaptations of Gaiman’s works, including “Sandman” which premiered this year on Netflix, as well as the series “Lucifer,” “Good Omens,” which was recently renewed two years after the finale of its first season, and the fantastic series “American Gods” which sadly looks like it has come to its end.

← Prev: Home Invasion Horror-Thriller 'Alone In The Dark' Breaks Onto Tubi (Trailer) Next: The Horror Filled Official Trailer For 'V/H/S/99' Is Here →