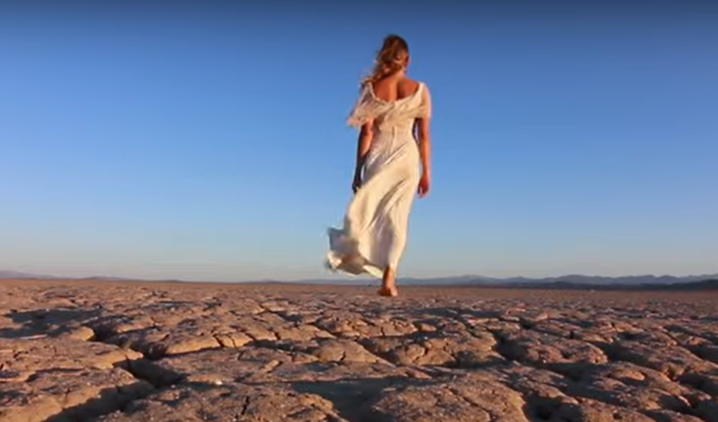 Audiences that went to theaters to see the premiere of Terrifier 2 were treated to the first teaser trailer for The Outwaters, a throwback to the early days of the found footage genre.

“Playing out over three memory cards discovered in the Mojave Desert, four travelers set out to make a music video while camping. Their trip starts out uneventful, though their peace is occasionally disrupted by unexplained sounds, vibrations, and unnatural animal behavior. Then one night everything changes, sending the foursome on a mind-bending trip through terror.”

Writer-director Robbie Banfitch takes viewers off the beaten path and into their own nightmares with the film starring Angela Basolis, Michelle May, Scott Schamell, and Banfitch.

“My whole life I’ve dreamed of making a ‘scary movie,’” says Banfitch. “Thanks to friends, family, and years of hard work, the daydreams were made tangible. We filmed in the dark and dust and along the sand-swept highways of the Mojave. We screamed and laughed and ran under dim desert moons with rattlesnakes, wild burros, bats, and fire ants. That I will have the opportunity to share our work with filmgoers is a gift, and I hope everyone watches with the lights off.”

“This is one of the scariest films I have ever seen,” praises Bloody Disgusting Managing Director Brad Miska. “It’s rare you find something so haunting and raw as The Outwaters. It will make you think twice about going outside again after watching it.”

In 2023, The Outwaters will open in theaters in early 2023 via Cinedigm, followed by an exclusive streaming launch on Screambox. It will join Screambox’s growing library of unique horror content, which also features Pennywise: The Story of IT, Masters of Horror, 13 Nights of Elvira, PussyCake, When the Screaming Starts, Toxic Crusaders, and the forthcoming Terrifier 2.

← Prev: Product Review: Halloween Neon Sign By Sketch & Etch Next: The Wait Is Over 'Halloween Ends' Slashes Its Way Into Theaters This Week! →