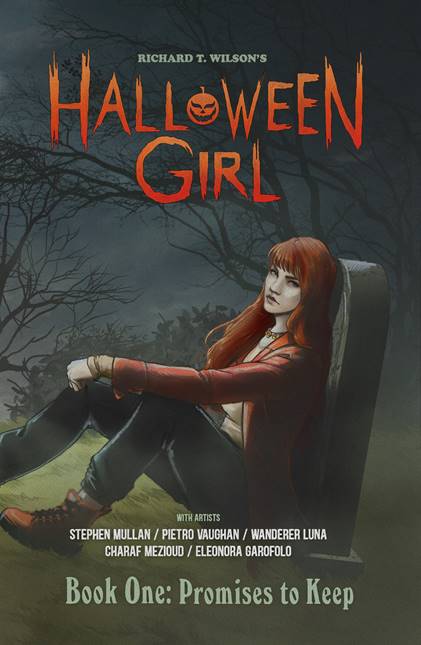 Richard T. Wilson’s Halloween Girl graphic novel series got off to a fine start, as related in this Horror Fuel review of Volume 2, and now publisher Mad Shelley Comics has released the full series. Following is the official press announcement.

The Emmy® award-winning, writer-filmmaker, describes his latest project as a ‘supernatural odyssey with a healthy dose of reality’. “After all these years, this feels like the first thing I’ve written in a way. I feel like my whole life, I’ve been punching through the darkness like the ‘Halloween Girl’ – but this is the first time I’ve actually written about it!” says Wilson.

What is the ‘Halloween Girl’? An angsty, teen ghost named Charlotte (aka ‘Halloween Girl’) and her wise-cracking, supernatural gal pal, Poe who battle diabolic, secret society, The Hollow for the soul of their hometown Crystal Springs – and their own salvation. Taking its cues from sources as disparate as 70’s horror comics and classic literature, ‘Halloween Girl’ began its life as an acclaimed short film Wilson wrote and directed in 2015 to process his mother’s passing, before spinning off into the award winning sister web series, ‘Under the Flowers.’.

Following the release of the web series, Wilson took a deep dive into the angst-ridden ghost’s world, aided by a group of gifted illustrators from around the world. Early issues were released to critical acclaim, but amidst the joy, Wilson’s life-long battle with an anxiety disorder finally caught up with him.  After seeking help, Wilson says his life has gone from black and white to color, and the ‘Halloween Girl’ reflects that journey.

Muse for the Halloween Girl film, Under the Flowers web series and graphic novel, acclaimed singer-songwriter Charlotte Martin has written an original song to promote the novel, which you can listen to above.  Between Martin’s soulful inspiration and a team of illustrators Wilson describes as ‘heaven sent’, ‘Halloween Girl’ promises to be a supernatural adventure like no other this spooky season – in this world, or beyond.

The entire graphic novel series is now available for order from all comic shops and book stores including Barnes & Noble and Amazon.

← Prev: Blades In The Darkness Making Its US Premiere At Days Of The Dead Next: Movie Review: The Accursed →