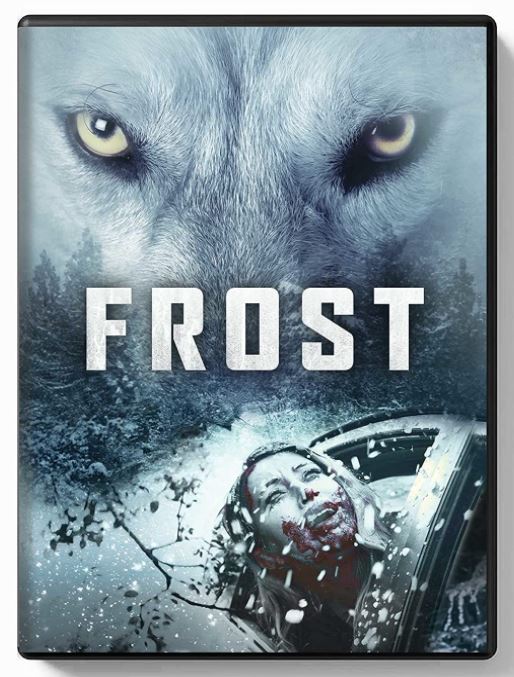 Grant (Vernon Wells of Commando and The Road Warrior fame) and Abby (Devanny Pinn, Death Count) are a father/daughter combo that have grown apart over the years, but the impending birth of Abby’s child have spurned a re-connection between the two.

After some of that good ol’ reminiscing, the pair head out for a fishing trip near Grant’s remote cabin, deep in the woods. One car crash en route to said trip makes everyone’s plans go completely tits up as Abby becomes trapped in the car, and as the weather gets worse and worse Grant has no choice but to leave Abby and head out for help.

All of that aside, there’s also a surly wolf stalking about, because being pregnant and alone in the freezing cold didn’t suck hard enough for our heroine…

Director Brandon Slagle (working from a script from writer Robert Thompson and a story by James Cullen Bressack) have presented a razor-sharp tale of desperation and claustrophobia in Frost, who’s story takes place, for the most part, in the confines of a badly damaged car.

Left alone with Abby, we are dependent on the acting skills of genre-vet Pinn, and she is more than up to the task as she runs the gamut from afraid and desperate to places much, much darker with equal aplomb. This is truly her show and she shines!

Also of note is the more sedate turn from Wells, whom we all well know can play an over-the-top- lunatic unlike any other, but can also handle drama with equal skill.

Adding to the overall vibe of this feature are the cinematography courtesy of Kelton Jones who keeps the palette cold as ice and the shots tight which adds to that aforementioned claustrophobia and unease greatly, and the often stomach-churning effects of Oliver Poser that grow in intensity as things grow ever more hopeless for our protagonist.

While the feature is a study in nail-biting suspense done oh-so-right, the special features present on this DVD release from Cleopatra don’t do much to compliment it’s excellence, and consist of only a trailer (along with a selection of trailers for other Cleopatra titles) and an image slideshow.

Frost is a perfect example of what can be achieved with a handful of very strong actors, one major (and easily obtained) location, and a story that isn’t afraid to go to some seriously dark territory. Check this one out cats n’ creeps!