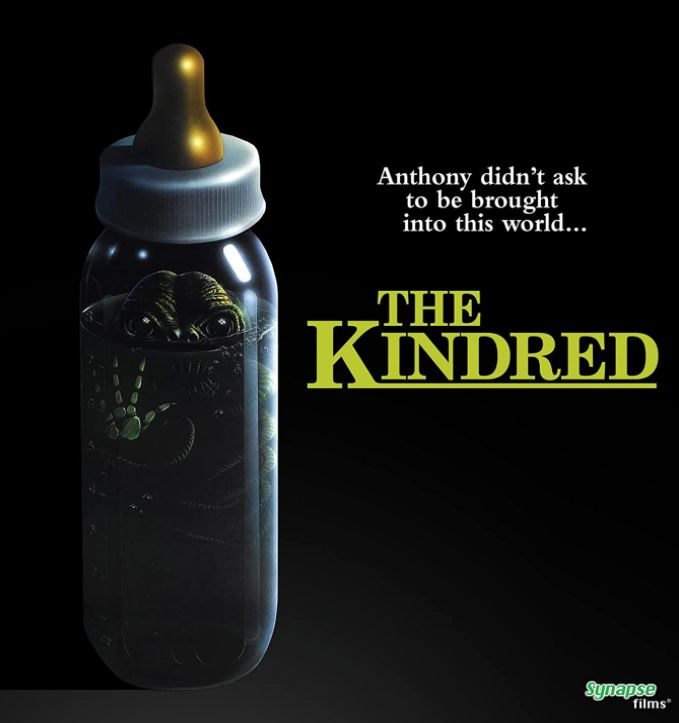 Ol’ scientist type John (David Allen Brooks) is having one hell of a shit day. Not only has his mother Amanda (Planet of the Apes‘ Kim Hunter), a scientist as well, been in the shittiest of health, but she is screaming all manner of shit about a brother John never knew he had (not before imploring him to destroy everything pertaining to her experiments).

Speaking of “experiments”, the head of the lab where John toils away, Dr. Phillip Lloyd (Rod Steiger in a baffling choice of hairpiece) knows all about the things Amanda was cooking up in that lab of hers, and he’d do anything to posses it’s secrets… probably to add to the legions of monstrous murderous mutants he keeps in a secret prison.

So anyway, John, his girlfriend Sharon (Talia Balsam), a cadre of students, and a devotee of his mother’s work, Melissa Leftridge (Max Headroom‘s Amanda Pays… and yes, I know she was in the ’90s Flash TV show as well) schlep on up to Amanda’s pad where they get up to solving the mystery of her work… instead of just destroying everything, you know, LIKE SHE FUCKING TOLD JOHN TO DO!

Before long John’s brother makes the scene, and he’s a tentacled terror par excellence (that screeches like an Eagle no less) and before long he begins jamming those slimy members in all manner of places they should not go which does wonders for the film’s body count, but little in helping John on his quest for knowledge!

As presented by writers/directors Jeffrey Obrow and Stephen Carpenter (who brought us 1982’s slasher classic The Dorm That Dripped Blood and 1984’s supernatural shocker The Power),with a writing assists from John Penney, Earl Ghaffari, and Joseph Stefano (who just so happened to write the screenplay for 1960 Hitchcock masterpiece Psycho), The Kindred is a rollicking blend of creature feature, science-run-amok parable, and old, dark house thriller that provides a few twists and turns along the way!

Acting out such a horror hodge-podge is a capable group of thespians, with strong turns from Steiger and Hunter, as well as the aforementioned Pays and a manic turn from The Hills Have Eyes Part II‘s Peter Frechette.

Also worth a mention is Brooks gravitas infused performance that makes the material seem much more serious than it actually is… but look, we all know a fun story and solid acting are all well and good, but this is a monster movie, so our chief concern should be “How are those gosh damn fucking special effects?!!”

They’re freakin’ fantastic! This flick comes full equipped with all manner of grizzly experiments, gore, transformations, body melts, and a nasty lil’ mother of a creature that’s all teeth, tentacles, and nightmares… and all of that comes to gooey life thanks to sweet, sweet practical effects wizardry that is nothing short of a work of arcane art!

Adding to the irresistibly ghoulish goulash that is The Kindred experience, ol’ Synapse Films have gone and slapped a choice selection of bonus features on this Blu-ray release including an informative commentary courtesy of Obrow and Carpenter, followed by an excellent retrospective/making of that really brings the films production to lascivious life!

After that we get a collection of archival on set footage (focusing mainly on effects sequences), a still gallery, storyboards, and the film’s original theatrical trailer.

Also included are a series of TV spots, and a video trailer.

The Kindred is creature feature gold with all of the creatures, gore, and slime any red-blooded horror hound could ask for!