Writer/director Brad Rego’s Cryptid is a nifty creature feature that serves up The X-Files vibes with a dash of Kolchak: The Night Stalker for good measure. Former big-city journalist Max (Nicholas Baroudi) is working as a freelance reporter for a small-town newspaper in Maine, relegated to high-school sports items while hoping for a story that he hopes will give him a break back to the big time. He may have stumbled on a potential item when he comes across an animal attack victim that Sheriff Murdoch (Chopper Bernet) has bad feelings about. Max gets his photojournalist coworker and buddy Harriet (Ellen Adair) involved, and soon enough the pair are on the trail of the titular beast. Rego has crafted a fun monster movie that follows and respects the rules of classic creature features and sports an  impressive monster-suit design and great-looking practical effects and makeup. The chemistry between Baroudi and Adair is super, with their characters having a “Will they or won’t they?” relationship that adds to the drama. Cryptid follows some monster movie tropes but solid direction and engaging performances keep it consistently entertaining and highly watchable. 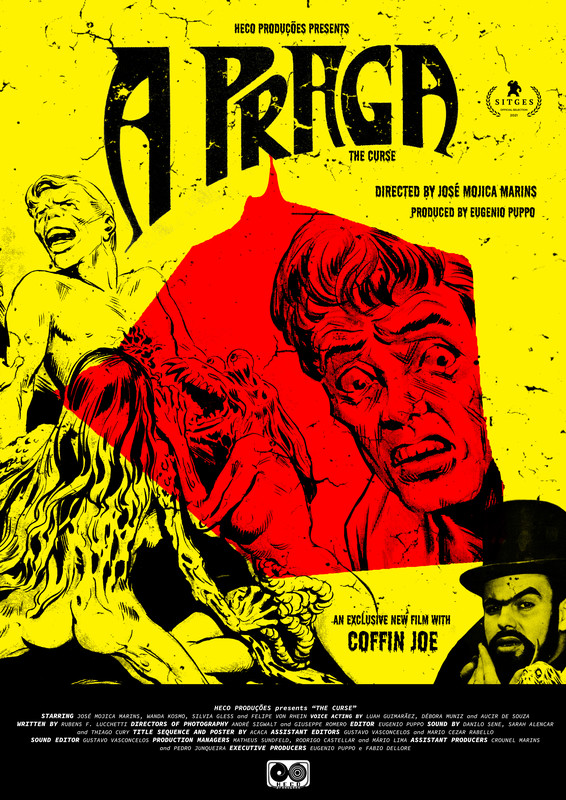 Mostly shot in 1980 on Super 8mm film but unfinished until legendary director José Mojica Marins — creator of the Coffin Joe character — and producer Eugenio Puppo decided to complete it in 2007, The Curse (A Praga; Brazil) is a supernatural horror film based on a story that appeared in a graphic novel series from Marin. Running just under an hour in length, the film finds cocky Juvenal (Felipe Von Rhine) and his girlfriend Mariana (Silvia Gless) upsetting an elderly woman (Wanda Kosmo) by photographing her. Juvenal mouths off to her and soon enough learns that she is a witch who has placed a curse on him that involves a wound on his side that requires being fed raw meat to ease his physical pain. Blood, gloom, and bare breasts abound, with Coffin Joe providing commentary on the proceedings. Fans of Marins’ films, EC horror comics, and the Creepshow franchise should find The Curse to be an intriguing watch that boasts an eldritch atmosphere, highly uncomfortable sequences, and some gruesome set pieces.

Short-film documentary Mojica’s Last Curse (A Última Praga de Mojica; Brazil, 2021) is a highly informative companion piece to The Curse that details the history and restoration of the feature film. Although the documentary contains some clips from The Curse that spoil some of its creepier reveals, if watched before the feature, this short provides an appealing behind-the-scenes introduction that can make viewers of The Curse appreciate its finally being completed in a deeper way.

Cryptid, The Curse, and Mojica’s Last Curse screen as part of Another Hole in the Head Film Festival, which takes place in person in San Francisco, California from December 1st–December 18th, 2022 and also On Demand on Eventive and live on Zoom for those who can not attend the live screenings. For more information, visit https://www.ahith.com/

← Prev: Shorts Reviews: “The Cradle,” “Viewfinder,” and “Mindful Meditation” (Blood in the Snow Film Festival) Next: Unwrap The Holiday Horror 'The Leech' This December (Trailer) →