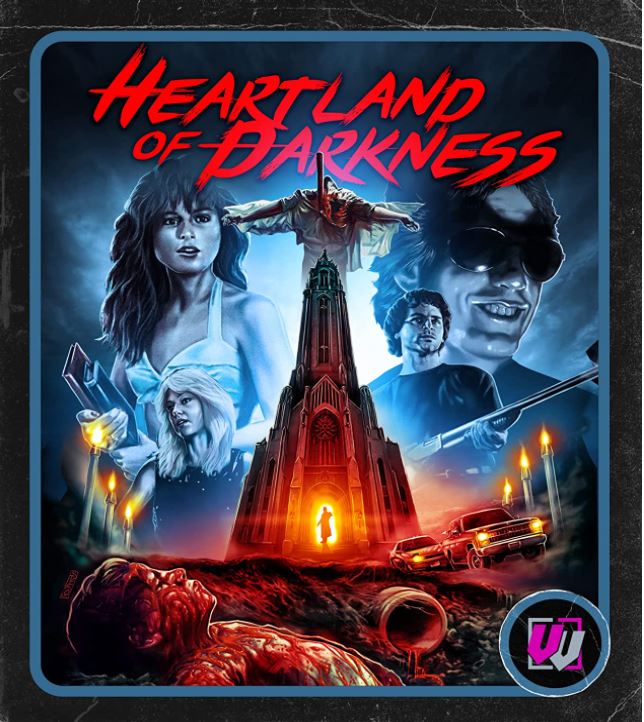 Newspaperman Paul Henson (Dino Tripodis) moves from the Windy City to the middle of nowhere (which is proven to be every bit as windy, and pretty damn rainy as well) and immediately gets up to his usual newspaper biz.

As fate and the script would have it, Paul is up to his asshairs in stories to publish as the town is filled with all manner of dead bodies in various states of “completely fucked up”… and those cut-up corpses seem to be pointing to the involvement of the occult!

Seeing as most of the town and people in positions of authority are under the sinister sway of Reverend Donovan (Nick Baldasare)… who looks like a man of the cloth by day and the goddamned Night Stalker once the sun has set, it comes as little surprise.

Soon our hero, as well as his star journalist Shannon (Shanna Thomas) and the eccentric Reverend Kane (John Dunleavy), are at war with Satan’s freaky flock… and they may not win the fight!

Shot on 16MM, loaded with action, and displaying a rather large number of locations; writer/director Eric Swelstad’s Heartland of Darkness (a.k.a Fallen Angels) is certainly ambitious (even more so when the included bonus material reveals this was basically a student film, although on an insane scale for such things)… but it’s also a great deal of good ol’ freaky fun!

Kicking off with a great story that’s equal parts Satanic Panic ridiculousness and small town horror (with a dash of Lovecraft and a sprinkle of Kolchak: The Night Stalker) it’s easy to get swept up in our weary hero’s quest to bring the town’s evil into the light.

Speaking of such, Tripodis does a solid job as the protagonist of the piece, and his performance results in a likable hero indeed (even if it appears he had his teenage daughter when he was 5 years old), but the supporting cast in this baby is what really glows with a sinister shine!

And no one shines as bright as Nick Baldasare as the putrid preacherman Donovan who mixes Bible verses with Dr. Doom-style soliloquies by way of Anton Lavey that is pure over-the-top “evil” that it hits that sweet spot between menacing villain and comic book bad guy.

Also of note is the appearance of legendary scream queen Linnea Quigley as schoolteacher Julia Francine… a teacher that looks like Kelly Bundy, is super into Satan, and frequently takes off her clothes… seriously, where was this type of top-shelf educational staff when I was in High School? I certainly would have had a perfect attendance record…

Additionally, this fright flick features some quality practical gore effects, some striking cinematography courtesy of Scott Spears (some of his placement choices bring to mind the dynamic “camera” angles seen in the aforementioned comic books), and an assassination sequence that brings to mind the guerilla tactics and frenzied camerawork utilized by Larry Cohen… and that is high praise indeed!

Speaking of “praise” let me tell you cats n’ creeps, the groovy ghouls over at Visual Vengeance have packed this Blu-ray release with a literal fuck-ton of bonus features, and that is a wickedly wonderful thing!

First out of the grizzly gate are a duo of audio commentaries; one featuring Swelstad, Baldasare, Spears and composer Jay Woelfel which takes us through the film’s production and it’s 30 year journey to get to our haunted hands, and the other courtesy of Weng’s Chop magazine’s Tony Strauss who examines the film from a fan’s perspective with plenty of factoids and anecdotes.

Next we get a 40 minute retrospective/”making of” documentary (that comes complete with it’s own trailer), two interviews with Quigley (one new, one archival with vintage commercials left in… so awesome!!), an image gallery, and two trailers for the film.

Following that we get the 36 minute workprint version of Fallen Angels (with optional commentary from Swelstad) created to entice investors to gain capital to finish the picture, an archival “making of” featuring interviews with the cast and crew from vintage newscasts, an archival TV spot, an archival distribution promo reel (featuring a third title for the film; Blood Church) which is in essence 13 minute cut of the film… for comparison the finished feature runs 102 minutes).

Last up we get a behind-the-scenes look at the death of a character in the film (not spilling that here boils n’ ghouls), a director spotlight article from Fantasm magazine, and the Visual Vengeance trailer for the film’s Blu-ray release.

Epic, comic book-crazy, and monstrous mounds of fun; Heartland of Darkness is not to be missed for lovers of Satanic shockers… plus who doesn’t need more Linnea Quigley in their lives?!!