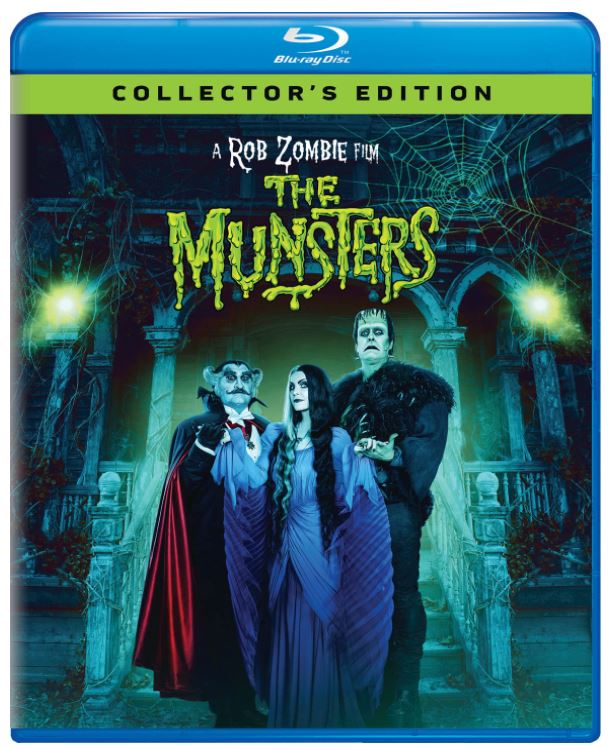 Meanwhile, ancient vampire The Count (better known as Grandpa, and played here by prominent character actor Daniel Roebuck) is trying to get his daughter Lily (Sheri Moon Zombie) hitched pronto to little success… but guess who she ends up falling head-over-heels for?

What follows is a wicked whirlwind courtship, and before long Herman has inadvertently sold The Count’s ancestral home, because while he does have a brain in his head it isn’t a particularly functioning one.

Will that freaky family be able to find a new dread domicile they can call home?

Rob Zombie is back with his latest film, The Munsters… and while the on-line chatter was grumpy A.F. concerning this fun fright flick, fans of the popular sitcom upon which it is based have nothing to worry about when they park their arcane asses in front of this putrid picture!

While the story is basic (ghoul finds monster, they fall in love, his idiocy results in turmoil… ), the execution is anything but! Comprised of a color palette that will immediately call to mind Basil Gogos’ covers for Famous Monsters of Filmland and the boxes for Aurora horror model kits of the 1960’s; this is a Mario Bava level of color saturation that will absolutely bathe your eyes in beautiful hues that add to the psychotronic, eternal-Halloween vibe of the piece.

The cast is very game as well with Philips and Moon Zombie doing a fine job of performing the roles made famous by Fred Gwynne and Yvonne De Carlo, but the real star off the show is Roebuck who takes over the Grandpa role from the late Al Lewis… this is a cranky tour de force and every-bit the equal to our beloved Lewis.

There is also plenty of fan service here as well with appearances by deep-dive characters like Zombo (played by Philips as well), Lily’s brother, the hustlin’ were-wolf drunkard Lester (Tomas Boykin), robot Tin Can Man (voiced here by original series actor Butch Patrick, who’s original-series character Eddie does not appear here, nor does his cousin Marilyn) and Creature from the Black Lagoon dead-wringer Uncle Gilbert (Renáta Krisztina Kiss) as well as origin’s for grandpa’s bat companion Igor, and the family’s pet dragon Spot. It this obvious love for the material that marks Zombie’s film as the creation of a fan of the series, for fans of the series (as well as new ones hopefully, as this film is PG rated and perfect for the lil’ cats n’ creeps in your life)!

Also of note is a third act appearance by the legendary Cassandra Peterson, who plays a real estate agent… a departure from her most famous role, that as Elvira: Mistress of the Dark… but Big E would be right at home here as well!

As for special features on this Blu-ray release from Universal Home entertainment, the pickings are few but quality with an hour long glimpse behind-the-scenes of the film’s production as well as an audio commentary featuring Zombie who takes us through the creation of the film, and the long road to bring it to screen.

Full of heart, lurid color, and a hearse-load of fun, Rob Zombie’s version of The Munsters is a real treat for fans of the original series and makes for the perfect Halloween film to share with your fiendish family at Samhain!