The 2023 SXSW Conference & Festivals, taking place in Austin, TX from March 10–19, has unleashed information about the first wave of horror and horror-adjacent titles premiering at the fest, and it’s a doozy! Have a gander at what’s on tap so far, and check back here for the next announcement wave. For ticketing and other information, visit https://www.sxsw.com/.

Evil Dead Rise tells a twisted tale of two estranged sisters, played by Sutherland and Sullivan, whose reunion is cut short by the rise of flesh-possessing demons, thrusting them into a primal battle for survival as they face the most nightmarish version of family imaginable. Executive Producers include Sam Raimi and Bruce Campbell. Cast List: Lily Sullivan, Alyssa Sutherland, Morgan Davies, Gabrielle Echols, Nell Fisher

A bold coming-of-rage story where Joy, a Filipino immigrant, and her daughter Grace encounter a darkness that threatens all they have worked for. Cast List: Maxine Eigenman, Leanne Best, David Hayman (World Premiere)

An Indian-American teenager struggling with her cultural identity has a falling out with her former best friend and, in the process, unwittingly releases a demonic entity that grows stronger by feeding on her loneliness. Cast List: Megan Suri, Neeru Bajwa, Mohana Krishnan, Betty Gabriel, Vik Sahay (World Premiere)

All you have to do is listen. A disgraced journalist turns to podcasting to try and rebuild her career – but her rush to generate headlines soon uncovers a strange artifact, an alien conspiracy, and the lies at the heart of her own story. Cast List: Lily Sullivan (International Premiere)

Talk To Me (Australia)

Lonely teenager Mia gets hooked on the thrills of conjuring spirits through a ceramic hand, but when she is confronted by a soul claiming to be her dead mother, she unleashes a plague of supernatural forces. Cast List: Sophie Wilde, Miranda Otto, Alexandra Jensen, Joe Bird, Otis Dhanji, Zoe Terakes, Chris Alosio (Texas Premiere)

The Wrath of Becky 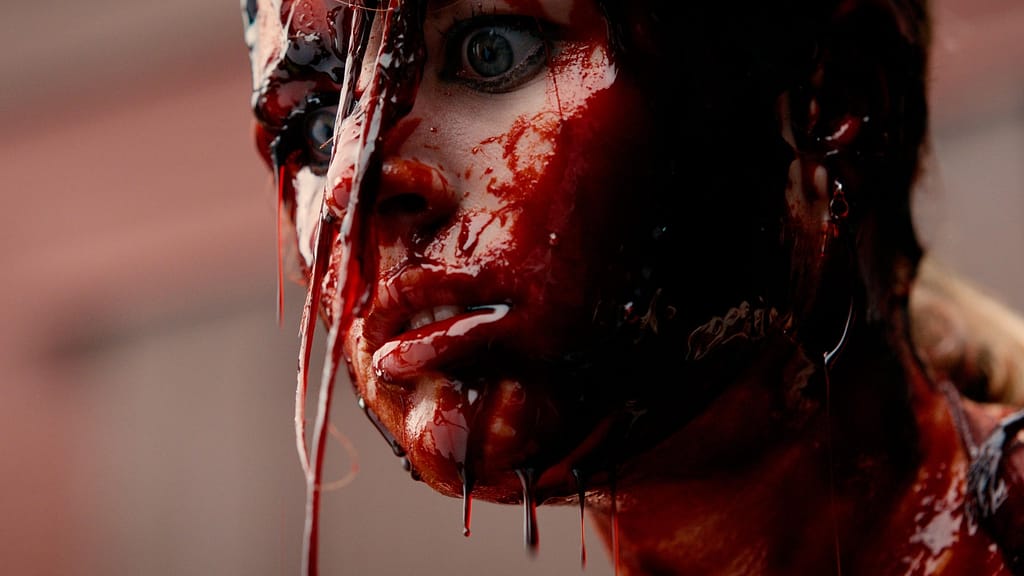 Bite-sized bits for all of your sex, gore, and hilarity cravings.

A disaffected gas station clerk finds out why they call it the “graveyard shift” after oil drillers set loose an ancient race of mind-controlling parasites.(World Premiere)

Every House is Haunted

A struggling couple moves into a haunted house… on purpose. (World Premiere)

Fleeing a long-term relationship, a young man seeks refuge with his best friends. After discovering their strange instruments, he’ll learn the bachelor lifestyle is not as sweet as it sounds. (World Premiere)

Arthur, a member of an elite SWAT Samurai team, embarks on a rescue mission into the spirit world in order to recover his father from vengeful Japanese Yokai spirits. (World Premiere)

Get to know the Mundanes, a faceless suburban family with an unusual appetite. (World Premiere)

Pennies from Heaven is a short comedy about two eccentric twin sisters who stumble upon a pickup truck full of pennies and follow the adventure wherever it takes them. (World Premiere)

Hey Puss! Still playing hard to get? Let me be your pussycat. (World Premiere)

Run celebrates the absurdity of being alive today.

We Forgot About The Zombies

When an ominous mould appears in their room, two African brothers seeking asylum are faced with a dark entity lurking within their direct provision centre. (Texas Premiere)