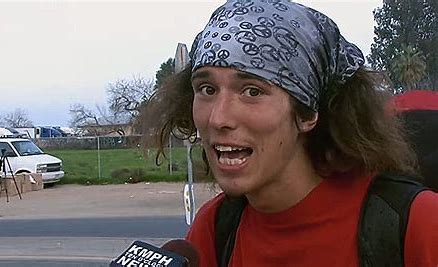 Netflix continues to feed the addictions of true crime junkies. The latest documentary the streaming giant has released is The Hatchet Wielding Hitchhiker.

The true story of Caleb “Kai” McGillvary, an unhoused nomad who, after saving a woman from a violent attack, became an overnight celebrity sought after by reality TV producers and adoring fans alike — until a murder turned his fame into infamy.

It began with a viral video featuring a hitchhiking man, identified as “Kai” (born September 3, 1988, as Caleb Lawrence McGillvary) from Edmonton, Alberta. It was released on February 2, 2013, by a reporter from a local news station in California. The video went viral and received national attention in the press. On May 16, 2013, McGillivary was charged with the murder of attorney Joseph Galfyandwho was beaten to death. Kai’s defense was that he acted in self defense after the man sexually assaulted him, sill he was found guilty and was sentenced to 57 years.

Watch the interview that made Kai famous.

← Prev: MidWest WeirdFest's First Wave Announcement Serves Up the Eerie and the Imaginative Next: Peacock Celebrates Friday The 13th With Release Of Horror Movie 'Sick' →