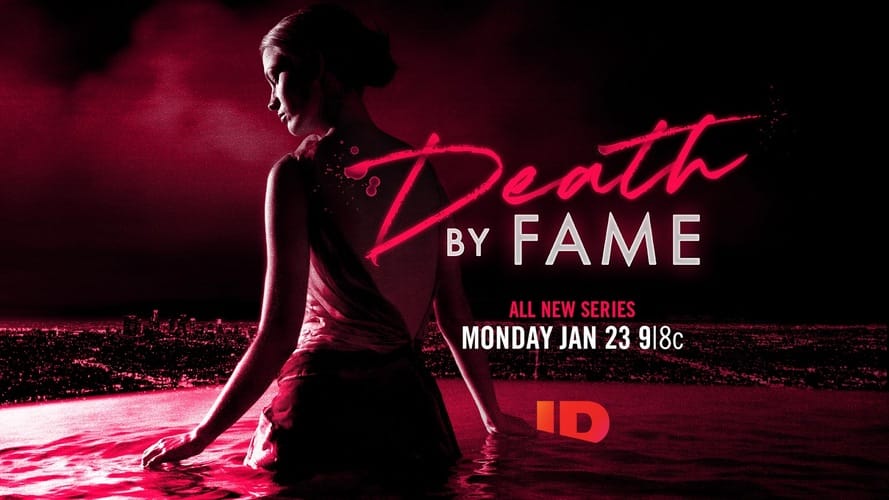 Ahead of its premiere this coming Monday, January 23, at 9/8c, Investigation Discovery offers an eerie glimpse into the highly anticipated new true crime series, “Death By Fame.”

Today we’ve got a first look at the series, which revisits some of the most tragic crimes in current pop culture history. The network also launched a companion podcast of the same name, hosted by the criminal defense attorney and legal expert Sara Azari, which will venture outside the series to explore different shocking cases that illuminate the dark reality of our cultural obsession with celebrity and the sinister side of fame.

With episodes dropping weekly, the “Death by Fame” companion podcast expands upon the premise of the ID series, with Azari exploring the investigations into and court proceedings around notorious celebrity crimes and the Hollywood tragedies that remain shrouded in mystery. In each episode, Azari will be joined by various entertainment reporters, industry insiders, and legal experts who will offer firsthand insight into each case.

In the podcast’s premiere episode, available now, Azari and journalist Dino Ray Ramos delve into the tragedy surrounding what was supposed to be one of the happiest shows on television: “Glee.” Building off insights featured in ID’s three-part docuseries ‘The Price of Glee,’ available to stream now on discovery+, Azari and Ramos discuss the tragedies and pressures that plagued the hit show and its cast. The podcast is available now on Apple, Spotify, or wherever you get your podcasts.

In a new podcast episode available Monday, January 23, Azari and Steve Wolfe, a weapons expert and prop master, will break down the tragic shooting on the “Rust” film set in New Mexico that claimed the life of cinematographer Halyna Hutchins. Recorded before the Santa Fe District Attorney’s Thursday, January 19 announcement of involuntary manslaughter charges against the film’s actor and producer Alec Baldwin and set armorer Hannah Gutierrez-Reed for their roles in the shooting, the podcast episode features Azari and Wolfe peeling back the layers of this case; examining everything from gun safety on set, the intricacies of the legal case against Baldwin and the film’s producers, and how grueling hours and shoestring budgets could lead to such a deadly mistake.

Viewers can tune in this Monday, January 23, at 9/8c on ID for the “Death by Fame” series premiere on ID. The series debut episode, “Celebrity Sexpert,” recounts the heartbreaking death of Drew Carey’s ex-fiancé and renowned Hollywood sex therapist Dr. Amie Harwick, who was found murdered the day after Valentine’s Day.

Additional episodes of the series will explore the cold-blooded murder of “The Voice” sensation and rising star Christina Grimmie, whose YouTube channel attracted a stalker with sinister motivations; Macedonian model Adea Shabani who arrives in Los Angeles with big dreams then mysteriously goes missing; the overnight success of actor Lloyd Avery II after starring in “Boyz n the Hood” and who then goes on the run in a bizarre portrayal of life imitating art; and more.

← Prev: Movie Review: Bermuda Island (2023) Next: 'Alone At Night' Slashes Its Way Into Theaters And On Demand →