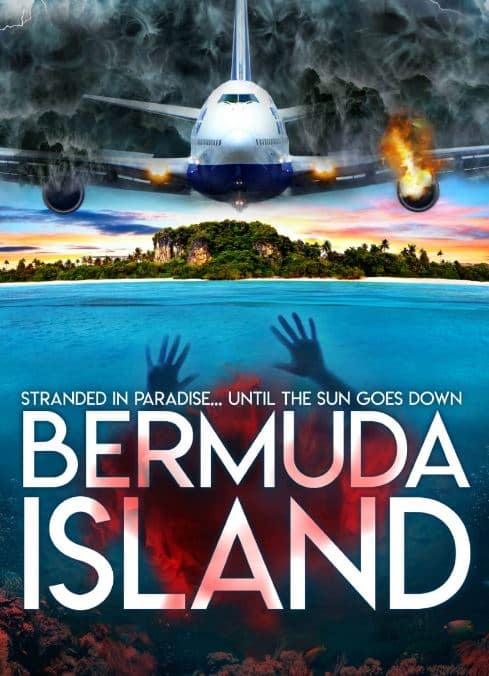 After a lil’ shooty-shooty; a team of FBI agents capture arms dealin’ dastardly devil Diego (Noel Gugliemi) and proceed to load him on a civilian-packed plane headed down Puerto Rico-way… regardless of the threat of a major incoming storm and the chagrin of Air Marshall Jonas (Natural Born Killers’ Tom Sizemore).

Naturally the plane experiences a patch of  turbulence that sends the craft  hurtling towards the ocean… more specifically the preternatural dead zone known as the Bermuda Triangle!

Our heroes soon make it to an island where everything is puppies and rainbows… or cannibal monsters and a long-lived survivor to be more accurate… but will these folks ever stop bitchin’ long enough to face the threats at hand?!!

Coming from Mahal Empire Productions; I expected Bermuda Island to be an action-packed, monster-filled, gore-splashed, rollickin’ romp… and it sure as shit was… so, I win!

Okay, okay… here’s some more of my wicked words (by unpopular demand!)…

Director Adam Werth and Screenwriter Robert Thompson (working from a story courtesy of Mahal head honchos Michael and Sonny Mahal) certainly know how to keep an audience on edge because as soon as you think you have a handle on the ol’ staus quo here, an early plot-line is abruptly ended (and a major player is taken off the board) resulting in a fun bit of biz that keeps the viewer on edge that anything can happen in this fright flick!

And things certainly do happen (and a lot of them too), but the best of the best of them feature a relative ass-ton of creepy creature action… action that ofttimes leads to gallons of grizzly gore (courtesy of some top-shelf practical effects) being splashed with wild abandon… and you can bet your arcane ass that those beasties are men-in-suit creations instead of dull CG.

That being said, this flick is no slouch in the action department either and said excitement ratchets up nicely, both due to that aforementioned monster mayhem and the inevitable squabbles between the island’s new residents!

To put a beastly bow on it; Bermuda Island is just what the demented doctor ordered if you yearn for explosive action and gory creature-feature insanity all-in-one!