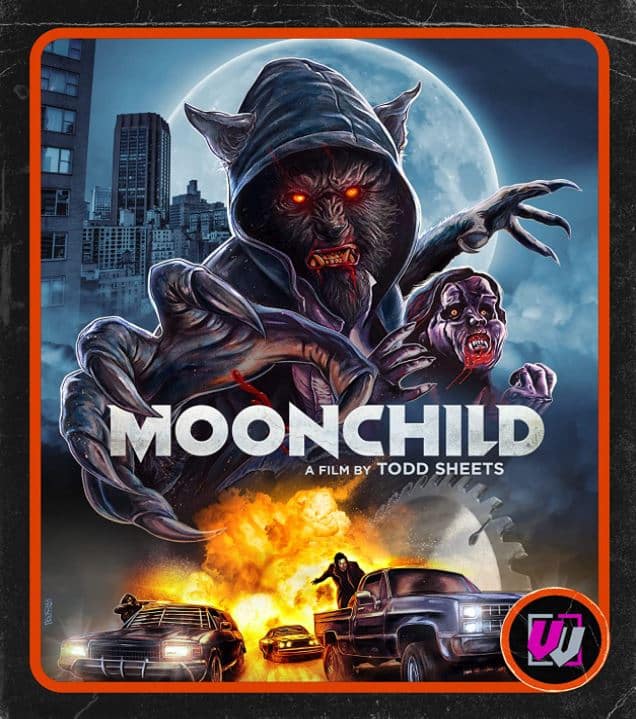 In a dystopian future, armored masked guards chase a man named Jacob Stryker (Auggi Alvarez) all over hell and back in an industrial area.

Why are they so pissed at our man Stryker? Well he escaped from an experimental prison center where hewas involved in something called Project: Moonchild… but before we learn just what that means for our hero he falls in with a group of heavily armed juvenile soldiers, their pit fightin’ pal Talon (Dave Miller), and their bad-ass leader Athena (Kathleen McSweeney) who decide to join him in finding his missing son and defeat the Solidarity who control the city.

Meanwhile it is learned that our hero is a bio-engineered werewolf created to fight wars, and before long a group of bounty hunters (including a ninja, a cyborg, a mature lady named Medusa, and eventually a comely blonde lady) is set loose to bring him back to those that made him, resulting in explosive battles among the cities various Areas.

Will Jacob and his rag-tag army succeed in escaping his pursuers and save his son?!!

Remember that chase I mentioned at the start of this whole revoltin’ review? Well, that tips the viewer off that Todd Sheets (Bonehill Road, Clownado) 1994 shot-on-video creature-feature Moonchild is ambitious as all fuck. A fight involving explosions, moving vehicles, and most-likely impaired vision is tricky to pull off safely with a major budget, but with next to none it’s downright insane… and awesome.

Insane and awesome sums the picture up nicely actually as Sheets has filled his no-budget epic with an over-the-top 90’s comic book sensibility and doesn’t hold back on the brawling, super-villain soliloquies, colorful characters (all sporting impressive home made costumes, some with extremely dangerous looking weaponry), transformation sequences, gore, some effective location… pretty much everything that makes a film costly… and has presented it with a D.I.Y. aesthetic that didn’t let lack of budget translate to lack of imagination.

Add to the mix a fast pace, rocking metal score, and incredibly game actors and you have an irresistible concoction for lovers of S.O.V. flicks!

Speaking of “irresistible”, the special features contained on this Blu-ray release from Visual Vengeance are just that, and they kick off with two audio commentaries featuring Sheets (along with Alvarez and Visual Vengeance’s Rob Hauschild respectively) that detail what it took to create this no-budget masterpiece, and how we came to see it in it’s present form!

Following that we get a thirty minute, archival “making of” documentary, a collection of archival interviews with members of the cast and crew, and the film’s original VHS trailer!

Next comes the original VHS cut of the film (which runs about three minutes longer than the main event), an alternate ending, an early short film by Sheets, a music video, and a trailer for Sheet’s other werewolf epic; Bonehill Road!

All of that ghoulish goodness comes in a case which also contains a booklet featuring liner notes by Horror Boobs‘ Matt Desiderio, a reversible sleeve featuring original VHS art (as well as a new design), a VHS sticker sheet, a collectible mini-poster, and most rad-ass awesome of all; the movie’s soundtrack on a separate CD!

Ambitious, fun, and at all times off-the-wall; Moonchild is a S.O.V. monsterpiece well worth howlin’ for!