We all know someone who can’t handle horror movies or are looking to ease into the genre. This list is for them.

After a couple are killed in an accident they have to find a way to deal with the family that has purchased their home. They turn to a shady character, known as Beetlejuice. Beetlejuice is more than they bargained for and now they have to find a way to get rid of him. ‘Beetlejuice’ was directed by Tim Burton and stars Winona Ryder, Michael Keaton, Geena Davis and Alec Baldwin.  This horror-comedy is a classic and is the perfect film for beginners.

After a group of scientist capture a spirit, a new business is born. The team hunts down, traps and store pesky spirits, when the city is at risk, who you gonna call? ‘Ghostbusters’ was directed by Ivan Reitman and stars Bill Murray, Dan Aykroyd, Harold Ramis, Ernie Hudson, Rick Moranis and Sigourney Weaver’ The Ghostbusters! More comedy than horror and is a great film for anyone to watch.

When one of the Owens sisters, runs into trouble with an abusive boyfriend, she calls her sister for help. The two witches attempt to rid themselves of the man, only to find themselves in more trouble. Sandra Bullock and Nicole Kidman will cast a spell on you in this film.

After the young Doctor Frankenstein inherits his grandfather’s estate, he sets out to make a creature and finally live up to the family name. This cooky comedy was directed by Mel Brooks and features Gene Wilder, Madeline Kahn and Marty Feldman.

In the movie, Jack Skellington, the Pumpkin King, wants to try something new, Christmas. After kidnapping Santa, Jack takes his place. After it goes very badly, Jack realizes not only where he belongs, but that someone loves him. This is a must see for both the horror novice and the expert.

Max accidentally awakes three witches, the Sanderson sisters, while trying to impress a girl. Now it’s up to him, Max’s crush, his sister and a talking cat to save the town on Halloween. Who could resist the Sanderson sisters? Not me. This Halloween classic stars Bette Midler, Sarah Jessica Parker, Kathy Najimy and Douglas Jones.

Aliens take over a high school and it’s up to group of misfits to save the school. And you thought your high school was tough. Josh Hartnett, Jordana Brewster, Clea DuVall, Laura Harris, Sawn Hatosy, Selma Hayek, Usher, John Stewart and Elijah Wood star in ‘The Faculty’, directed by Robert Rodriguez.

A vampire, sick of living in the shadows, steps out into the lime light with his own band. The Queen of the Vampires is awaken and sets her sights on the musician, but a woman stands in her way. Rock music and vampires makes for a sexy film. Singer Aaliyah stars along side Stuart Townsend and Marguarite Moreau in ‘Queen of the Damned’.

Shaun (Simon Pegg) and his best mate, Ed (Nick Frost), are on a mission to rescue Shaun’s mom and his exgirlfriend Liz after the city is over-run by zombies. ‘Shaun of the Dead’ is one of the best horror-comedies ever made.

When a teenage girl, played by Robin Tunney)  moves and starts a new school, she meets a group of girls with a dark hobby, witchcraft. Teenage witches? Yes please. Fairuza Balk, Neve Campbell, Rachel True and Skeet Ulrich star in this film, directed by Andrew Fleming.

Four strangers band together during the zombie apocalypse. On the road they learn about themselves and each other, all while slaying the undead. Half zombie film, half comedy, ‘Zombieland’ is completely entertaining. ‘Zombieland’ stars Woody Harrelson, Jesse Eisenberg, Emma Stone and Abigail Breslin, with a cameo by Bill Murray.

A giant great white shark is killing swimmers, it’s up to three men, played by Roy Schneider, Robert Shaw and Richard Dreyfuss, to stop the hungry beast. Everyone should see Jaws because… it’s ‘Jaws’.

A group of friends head to a cabin deep in the woods, only to face monsters released by an underground facility. ‘Cabin in the Woods’ is brilliant.  Everyone should see this film at least once (or twice). Chris Hemsworth, Kristen Connoliy, Anna Hutchison, Fran Kranz and Jesse Williams play the group of friends in this horror classic that was directed by Drew Goddard.

← Prev: A Look At Indie Film 'The Quantum Terror' Next: New Documentary To Explore 'The Curse Of Poltergeist' → 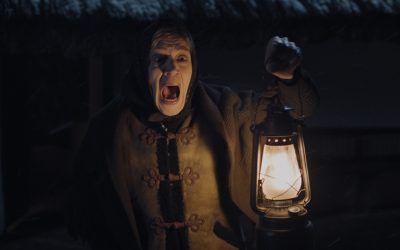 Smartdog Productions has released the poster and trailer for multi-award-winning horror Post Mortem, this Halloween....