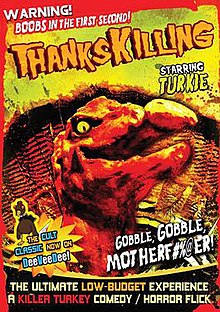 Wow. Wow. Wow.  In all of the best ways…wow!  Today is the inaugural year of my new Thanksgiving tradition!  I just watched the film “Thankskilling” directed by Jordan Downey.  If it were possible to give an emphatic slow clap of appreciation, Mr. Downey would receive one from me now.

When your main star is named Wanda Lust and the plot is of a foul (or is it fowl) mouthed turkey who, due to a necromancer’s spell, appears every 500 years to slaughter all Caucasians for crimes against the Native Americans, you know the movie will be a phenomenal flick.  No, I am not being sarcastic, and I am not taking a jab at this should-be classic, I thoroughly enjoyed it! For all you Oscar winning movie seekers, this probably isn’t your bag; however, for any of you out there who want a fun, ridiculous slasher that you can enjoy over and over again, invite this demonic turkey over and be thankful!

The killing was perfectly gory and fun, the turkey was so off the wall that it was great and even carved out emotion from me with the death of a stuffed animal
sizzling on a campfire.  Iconically stereotyped
character motifs and campy music. I give it 4 skulls! Okay, that’s not an official rating system, but I thought it would be fun to implement.  You can say “There’s no such thing as an evil turkey” all you want, but that won’t stop the Thankskilling. 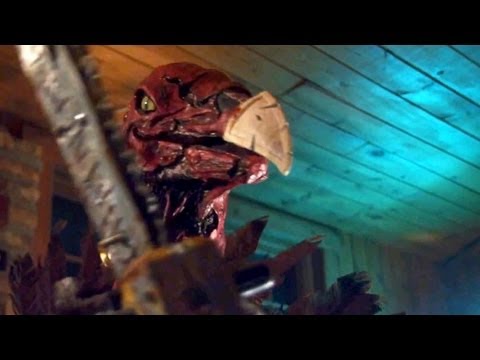 I am looking forward to watching the sequel – Thankskilling 3 (nope, that’s not a typo) – and highly recommend this to anyone who just watched their football team get beaten and is lazily lounging on their couch trying to stave off the turkey-induced nap that coincides with This holiday.