For the most part, I try (especially in this series of articles concerning serial killers and mass murderers) to stick to the facts.  I am of the opinion that these people’s deeds and lives are spicy enough without tarting them up with fantastical myths, rumors and opinions.  With that disclaimer, the focus of today’s article has her life so twisted and ensnared by folklores and guesswork that it is hard to syphon through what is real and what is legend.  I have corroborated with multiple sources and weeded out the obvious falsities to give the best possible outline of this The Blood Countess. 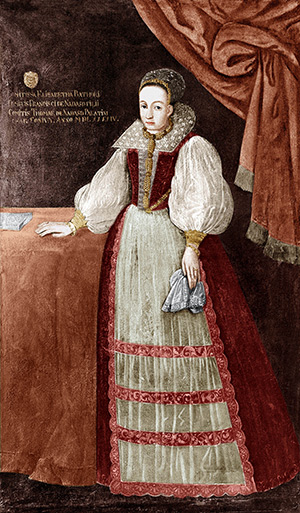 It is rare to find a woman as vicious Countess Elizabeth Báthory de Ecsed.  I do not know why women masochists and murderers are not as prevalent as men– maybe they are simply smart enough not to get caught and be awarded with grim notoriety, or maybe they don’t act upon the blood lust that their male counterparts fall victim to.  However, Bathory absolutely feasted (literally) upon that blood lust and was in a position where she did not care who knew of her vile deeds…until she pushed too far.

Born in 1560 in Hungary, young Elizabeth was destined for a life so twisted that she became one of the main inspirations for the iconic Dracula (the fact that she was of Transylvanian descent didn’t hurt either).  She was betrothed at eleven years old and married at a mere fourteen years old (not until after she was raped and impregnated by a servant. The illegitimate child was hidden away and no record after that remains of the child).  Her standing within the kingdom allowed for many servants to be at her disposal and she undeniably disposed of them.  Bathory was in charge of her family and Kingdom’s affairs whenever her husband was away at war.  She dabbled in health care and experimentation, which I have grotesquely dubbed torture with a purpose.  It seems that her hunger was assuaged somewhat by her husband, but after his death in 1604, her floodgates were opened.  (A list of her deeds will follow this article so I will not delve into them here, but needless to say thy are shocking).  She is recorded as being responsible for hundreds of deaths and although the exact number is mystery, high estimates are upwards of 650 victims.

In 1610 Elizabeth was finally caught red-handed in the act of torturing two young girls and at the trial Elizabeth’s accomplices were found guilty and executed based on the accounts of over 300 witnesses.  Unfortunately, due to her status, Elizabeth was placed in solitary confinement in Csejte Castle until her death in 1614.

Again, much of The Blood Countess’ life and actions have been embellished through time and oral histories; however, I have included a list of deeds that she is accused of.  There are many more potential acts, but these are the ones I was able to at least somewhat confirm.

← Prev: A First Look At Don't Knock Twice Next: Thankskilling →