What You Should Have Learned From The Indian Bear Attack Video

The internet again is buzzing with the latest shocking news story with no filters, a man in India being mauled to death by a bear while he tried to take a selfie with it. The attack took place after the man who was identified as a cab driver stopped off to relieve himself in a wooded area by a watering hole. While the man was there he noticed an injured Sloth Bear and decided to take a selfie with the animal. The bear reacted like how you would expect, it attacked the man.

The bear after it was captured by wildlife officials. via: Youtube

As the man was pinned to the ground, bystanders shouted at the bear and filmed the attack on their phones as Darwinism unfolded before their eyes. The footage clearly showed that the man was no match for the bear and as a result was killed. The bear was captured and was treated for its injuries. It should be noted that India has the highest rate of selfie-related deaths than anywhere else in the world.
Besides the obvious fatal lack of common sense, what should you have learned from this horrific video that seemed to have been pulled right out of a killer animal movie or comic?
First, some background on Sloth Bears they are not at all like sloths, like most bear species their fast when need be, most (if not all) bear species can run between 25-30 miles per hour.

They only earned the name because of their super long claws that resemble sloth claws, but these long claws prevent them from climbing trees. The claws are normally used to dig into large termite mounds. Sloth Bears normally eat termites but their diet also includes a lot of native Indian fruits and on rare occasions small rodents. 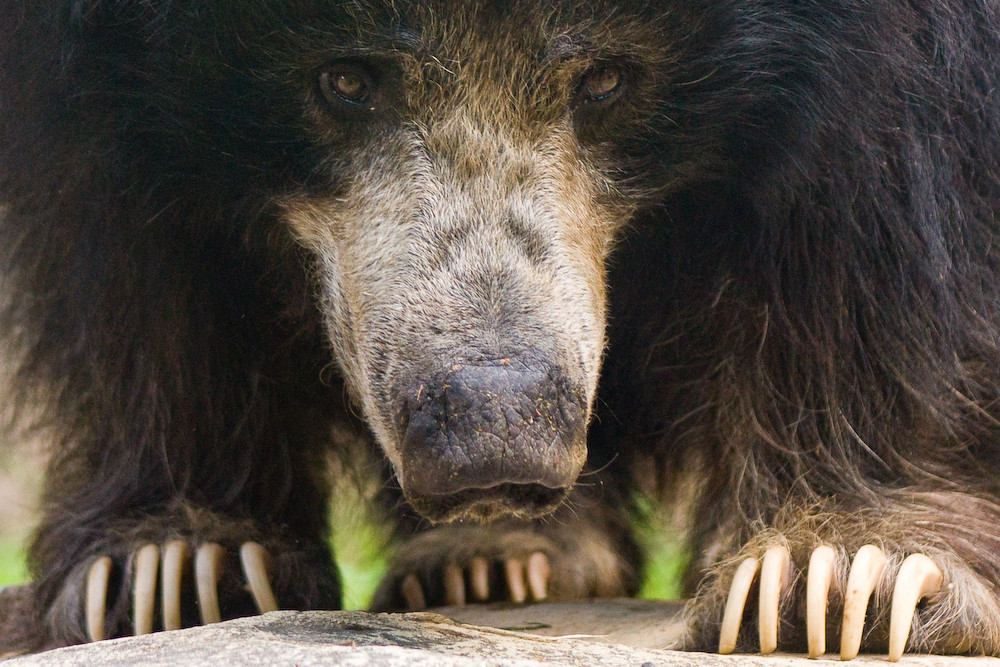 When it comes to the Sloth Bear behavior towards humans, they naturally look at humans as predators, not prey. When encountering humans, the Sloth Bears can’t escape like other black bear species, climbing trees, so they’re at a disadvantage. Now comes the biggest factor in this incident, the bear was injured. Animals and injuries are a dangerous mix, anyone who has ever worked with animals or is an outdoorsy type individual can all agree, the last thing you want to do is approach an animal that’s injured. Animals go on the offensive when they’re injured, it’s a natural reaction. Even your pets would turn on you if they’re injured and scared, but back to the bear. It’s known to show fear towards humans, it can’t “escape”, it’s injured, and some random fool approaches it with no fear/respect for it.

This is what we look like to most animals.

As cruel as this may sound, those who watched the video witnessed natural selection a scientific concept modern humans normally don’t think about, a stronger animal triumphing over a weaker one. I’ve been taught once that the term “survival of the fittest” is a nice way of saying “the dumb ones die first.” And as a species, we have forgotten our place in natures plan.
We’re not at the top of the list, we’re not even close. Early humans treated animals with fear and a form of respect, and a mutual understanding that nature is cruel but its how you work through it that matters. Wild animals are just that, wild. Instinct drives them, they may not have the same level of intelligence as humans but in a way, we don’t share the same form of intelligence say a caterpillar may have.

Admit it, this was the best part ‘Wicker man’ remake!

To sum everything up, all animals should be treated with a form of respect. Not all animals want to be your friend and not all animals want to eat you. You see an animal in the wild, keep your distance, don’t approach them, and don’t do anything that may antagonize them forcing them to lash out. Humanity may be the first to wear pants but most species on this small planet of ours have been around longer than us and there’s a reason for that.

If this happened in early human history I’m sure he would have been voted out of the cave.

WARNING: The video below contains images that some may find disturbing. Watch At Your Own Risk