Big budget exploitation at it’s finest; that’s what we are going to shoot the shit about today cats n’ creeps as we slap our eyeballs on Brian De Palma’s crime classic Scarface!

Cuban immigrant (and former soldier) Tony Montana (Al Pacino) comes to the ol’ U.S.A. with a dream; to be rich and powerful… and he doesn’t care how that happens. After a a low-level political hit here, and some dish washing there (gotta keep the lights on after all), Montana and his right hand man Manny (Steven Bauer) manage to survive an outrageously botched drug deal (there’s a fuckin’ chainsaw involved) and deliver the yayo to kingpin Frank Lopez (Robert Loggia). This sends Tony up the ladder to ill-gotten fame and fortune, and before long he’s kicked Frank to the curb (just how I will let you find out for yourselves), stolen his coke-lovin’ wife Elvira (Michelle Pfeiffer).

Of course once you get to the top the only place you can go is back down, and soon a multitude of forces conspire to make ol’ Tony fall, and fall hard… but will they succeed or will our anti-heroes own psyche destroy him first… or does fate have something else in mind for the man that has claimed the world as his own?

Look, Scarface has stood the test of time as a cinematic gem; De Palma directed the absolute shit out of Oliver Stone’s script… and as you may surmise from those names mentioned above, the acting is every bit the match for the skill employed by Messrs. De Palma and Stone. All of that is well and good, but that isn’t what you lot come here to read…

So why is this film well-and-truly primo Drive-In/exploitation fried gold? Well, you have the unreasonably counter-culture anti-hero for one… and then you have drug-fueled ultra-violence coupled with chainsaw wielding gangsters… plus unhealthy sexual relationships, mixed with buckets of spraying blood… in short, this is more in-line with what you’d expect from Roger Corman or Larry Cohen rather than Universal Pictures who brought us this flick. To put it in a nutshell, you have 42nd St. Magic presented with a multi-million dollar budget, and it remains an exhilarating, violence packed experience all these decades later! The time De Palma spent in our beloved horror biz (he directed Carrie and Phantom of the Paradise if ya didn’t know) must have had an effect on ‘im!

Adding to the cinematic splendor of Scarface; Universal Pictures Home Entertainment have included plenty of extras on this Gold Edition! First up you get both a Blu-ray and 4K Ultra HD version of the film, as well as a collectible replica of Tony’s “The World is Yours” statue. Also included are: a new Q&A session from the film’s 35th Anniversary Reunion featuring De Palma, Pacino, Pfeiffer, and Bauer, a host of archival featurettes (included are looks at the film’s legacy, the climate of drug-fueled Miami in the early ’80’s, the genesis of the film and how it adapted the original Scarface film from 1932… and more on that in a bit, the acting, and the creative choices utilized in the production of the picture), a collection of deleted scenes, an uproarious sample of the edits made to the film to make it suitable for Network television airplay, and a look at the making of the Playstation 2 game (which has aged as gracefully as a half cubit of dog shit in the noonday sun)… the times, the times; eh my electronic game playing lads?

While all of that is enjoyable, by far the best “special feature” this release has is the inclusion of a separate Blu-ray devoted to the aforementioned original recipe Scarface from ’32, that can be viewed in either a theatrical version or an uncensored cut.

For those unfamiliar, the classic version goes something like this: Italian immigrant Tony Camonte (Paul Muni) works for mafioso Johnny Lovo (Osgood Perkins) as an assassin and lieutenant down Chicago way. Against his bosses orders, Tony begins fucking up the shit of a rival gang led by the Irishman, O’Hara, which pisses off Lovo to no end. Just imagine how angry Johnny will be when he finds out our hero is pursuing his girlfriend Poppy (Karen Morley) who’s icy demeanor towards Scarface is beginning to soften.

Soon things escalate into all out gangland warfare and our newly-powerful anti-hero will have to keep one step ahead of his rivals, and the law while trying to protect his beloved sister Cesca (Ann Dvorak) all while trying to make good on the slogan which inspires him: “The World Is Yours.”

Every bit as entertaining as it’s 1983 counterpart; Scarface tells the same basic story as De Palma’s effort, but naturally has a more familiar Italian mob-centric story-line. Muni makes for one hell of a charismatic and violence-prone protagonist who’s charm and insanity transferred pitch-perfect to Pacino’s Tony Montana, and of course the romanticized outlaw making his own rules appeals no matter what decade the film was produced. And of special note; this version features our beloved Boris Karloff as a mob heavy named Tom Gaffney, so horror hounds take note!

As for bonus features on this Blu, they are light and include the aforementioned censored and uncensored versions of the film, an intro to the picture courtesy of film historian Robert Osborne, an an alternate ending. But this is all fine as these are special features on what amounts to one hell of a “bonus” in it’s own right!

Let’s face facts; if you love exploitation and crime cinema Scarface belongs in your collection like yesterday, and since this release has both the original and De Palma’a versions you simply can’t go wrong!

← Prev: ‘Dying Light’ And ‘Left 4 Dead 2’ Crossing Over! Next: A Hunt For Inspiration Leads To Bloodlust In 'Bliss' - On Blu-ray This November → 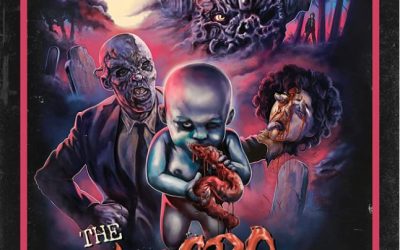