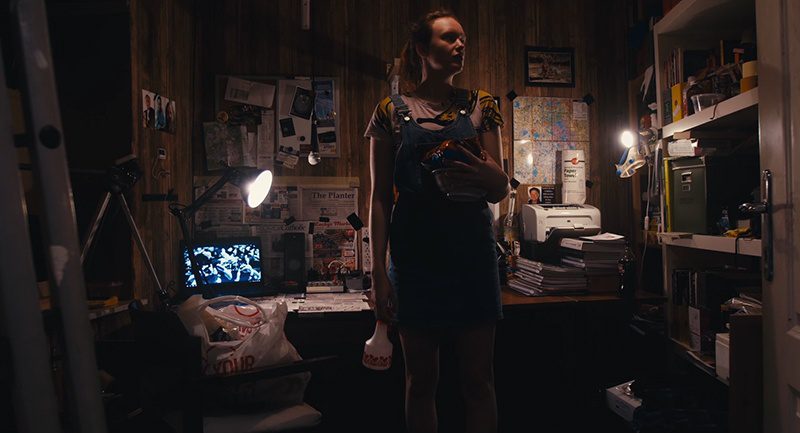 Masking Threshold and Blood Moon screened as part of the 26th annual H.P. Lovecraft Film Festival, which ran in-person in Portland, Oregon from October 1–3, 2021 and had a streaming edition October 8–12.

Director Johannes Grenzfurthener’s Austrian film Masking Threshold mashes up elements of Lovecraft and Poe with modern technology and social media, resulting in a highly disturbing, utterly unique take on the “descent into madness” subgenre of psychological horror. An unnamed IT professional (played by Grenzfurthener with voice acting by Ethan Haslam) — of whom viewers see only rare, partial glimpses — takes time off from work to do home experimentation in an attempt to find a cure for his rare form of tinnitus. Medical professionals, of whom he is skeptical, have been unable to help him, and as his research goes on, they combine with scientists to decry him as a crackpot conspiracy theorist. The nameless man is undeterred by such skepticism, and his rants become more unhinged as his on-camera experiments become increasingly unsettling (insect and animal lovers, take note). The visuals, shot by Florian Hofer and co-edited in an often frenetic style by Hofer and Grenzfurthener, are a balance of beautiful, mesmerizing, and highly unnerving, using macro lens and POV framing throughout, with a fair amount of unexpected sudden reveals that are not for the faint of heart — suffice it to say that the practical effects on display are impressive and sometimes bordering on stomach-churning. The screenplay by Grenzfurthener and cowriter Samantha Lienhard recalls the “I’m not mad, I’m of superior intellect” ravings of characters from stories by the aforementioned Lovecraft and Poe, and Haslam does a fine job of delivering the almost nonstop barrage of his character’s musings. The six-person sound department has created a sound design that is nothing short of hair-raising. Masking Threshold takes an unusual approach delivering its narrative, and fans of experimental film, cosmic horror, and demented science should find Grenzfurthener’s trip well worth taking.

Blood Moon is a chilling slice of cinema from 19-year-old self-taught writer/director/editor/sound supervisor Caleb Spilios, who looks to carve out a long, successful career for himself as a filmmaker. A group of teenage friends reunites after drifting apart for the summer. Tensions soar as a mysterious event turns the sky red and leads to deadly changes in behavior. Blood Moon starts off with a situation reminiscent of the original, classic “The Twilight Zone” television series and builds full-tilt into cosmic horror, with some cool practical effects inspired by John Carpenter’s The Thing. The talented Spilios knows his budgetary limitations and makes the most of what he has to work with, showing a fine balance of drama and suspense. The ensemble cast, which includes Caleb Easton, Ethan Charles, Fiona Hewes, Charlie Neuhauser, Eden Spilios, and Jake Tragakis, is fully believable as a group of friends and frenemies, and the dialogue rings true for their characters’ age range. Director of Photography Robin Glass captures the proceedings impressively. You can watch the teaser trailer here.