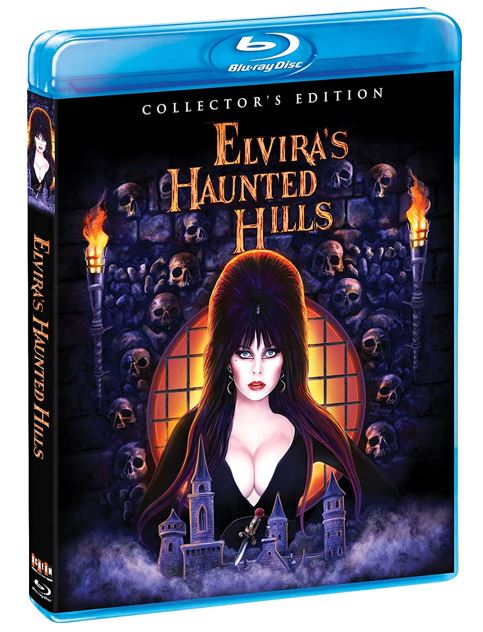 After an uproarious intro from the Mistress of the Dark herself, we dive right into the meat and potatoes (and what potatoes they are) of Elvira’s Haunted Hills; her second frightful feature film (following 1988’s Elvira: Mistress of the Dark) now available on Blu-ray thanks to those delicious devils o’er at Scream Factory!

Elvira (Cassandra Peterson) and her maidservant/comedic foil Zou Zou (played to absolute perfection by Mary Jo Smith) are on their way to Paris (where our titular heroine can perform in a can-can revue) via the Carpathian mountains in the year 1851.

After a disagreement with an innkeeper our heroes et off on foot where they are soon picked up by a carriage occupied by Dr, Bradley Bradley (Scott Atkinson in the Price role) who is en route to a nearby castle occupied by the intense-as-fuck Lady Ema Hellsubus (Mary Scheer)  and her sound-adverse husband Lord Vladimir Hellsubus (Rocky Horror Picture Show mastermind Richard O’ Brien in the Karloff role).

Once within that dread domicile, Elvira finds she bears a shocking resemblance to Vladimir’s dead-as-a-doornail first wife Lady Elura, and that the entire bloodline is cursed. Will Elvira be able to survive the doom hovering above the dread dynasty long enough to have the sex with (intentionally) hilariously dubbed (voice courtesy of animation voice-over legend Rob Paulsen) stableman Adrian (Gabi Andronache in a role that would be 100% played by Jason Momoa today if looks are an indicator)?

So what works about Elvira’s Haunted Hills? Absolutely every-fuckin-thing!

I haven’t laughed out loud at a film as hard n’ long as I did while setting my putrid peepers on this film. Over ninety minutes we are treated to more breast-related humor, wise-ass remarks, double-entendres, and downright belly-laughs than you’d be likely to find in 69 horror comedies… and all of them delivered by a cast that you can tell are having the time of their lives bringing this glorious nonsense to lascivious life!

This flick is also gorgeous to behold, with a visual style reminiscent of a Corman Poe adaptation by way of a Universal horror classic… hell, there are even sequences that bring to mind the work of Jean Rollin… so you can expect Autumnal landscapes filled with forests and graveyards under steel-grey skies, ancient castles, and delightfully stagey (and impressively large) sets.

Speaking of “impressively large” things, the laugh count in this thing is off-the charts with jokes hitting the monstrous mark left and right. This should come as no surprise as Peterson co-wrote the screenplay herself with longtime collaborator John Paragon (Who you lasceratin’ lot may remember as the genie Jambi in Pee-Wee’s Playhouse), and there is absolutely no-one that knows what works with Elvira more than these two… obviously… I mean Peterson actually is Elvira so… yeah…

While we are on the subject of heaving bosoms (we weren’t, but the feature always is), ol’ Scream offers up a bodice rippin’ selection of beastly bonus features!

Kicking things off we have an absolutely uproarious audio commentary featuring Peterson, Smith, Scheer, Atkinson, and director Sam Irvin (who you may remember directed Full Moon Features space-western Oblivion films in the mid-’90s) that provides as many laughs as it does details of the film’s production.

Following that we get a duo of featurettes looking back at the film’s production, as well as a collection of behind-the-scenes footage (To those of you with that all-too well known fetish of “Countless minutes of a wind battered Elvira looking nauseous atop a moving hay wagon” all I can say is: grab a Gatorade and a sock and buckle up!), and an on-set interview with O’ Brien.

Bringing up the rear we get a duo of trailers, a brief collection of outtakes, and an image gallery.

What else can I say… pound for precious pound, Elvira’s Haunted Hills are well worth exploring!